Off to the Far East we head for this next slot and we are delving into the bright lights of Bangkok Nights. Thanks to the team at NextGen Gaming, we can catch a glimpse into the hustle and bustle of Thailand’s capital city. Filled with bright colours, some great features and of course those famous Bangkok dancing girls, this game is sure to entertain you from start to finish. 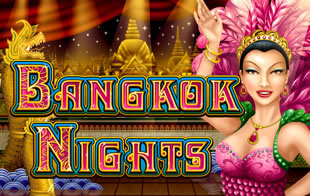 Play Bangkok Nights on any of these top casino sites;

Bangkok Nights is a 5-reel, 20 pay line slot offering up an RTP of just 95.12% for players. It is set against the night time sky line of Bangkok and the reels are guarded on either side by two huge golden dragons. Symbols are all flash in design, even down to the brightly coloured card symbols making up the lower values. High paying symbols are a feathered eye mask, a red glitter top hat, a pair of jewelled ear rings and some admission tickets. Lower value symbols are the A, K, Q, J and 10 symbols, that haven’t been given quite the same design treatment as the others which is a shame. As you enter the game there is an over the top oriental tune playing, which once the reels begin to spin fades away. Replaced instead by some calmer sounding noises, which we preferred.

Bet Amounts – Betting on Bangkok Nights begins at 1p per line in play and can be increased to £2 per line in play. This makes your spins from 1p up to £40 per spin. All you need to do to change your bet amount is amend the lines you have active, or the cost per line in play. Use the plus and minus signs at the side of each section until your reach your desired bet.

Wild Symbol – A dancing girl engulfed in pink feathers is your wild symbol in Bangkok Nights. She will substitute for all other symbols except the scatter and is the highest paying symbol in the game. Offering a x10,000 your bet amount for landing 5 of these beauties, but they must be on an active pay line; so remember that when changing the bets. Not only that but she also helps to trigger one of the features too, by landing a wild symbol on reel 1 and 5 simultaneously.

Scatter Symbol – Your scatter symbol in Bangkok Nights is quite fitting, in that it is the entrance to a nightclub. Landing three or more of these anywhere on the reels will trigger the bonus feature. Scatter wins are available here too, meaning by landing 2 or more of the scatter symbols, you will win an extra sum on top of any line wins that are present on the reels.

Pick a Prize Feature – As we mentioned earlier if you land a dancing girl wild on reels 1 and 5 together, you will trigger this mini feature. Once it triggers the 3 centre reels will be covered and reels 1 and 5 will have the dancing girl at the bottom of the reels. Underneath either girl will be a multiplier of up to x100 your bet amount, all you need to do now is choose one or the other. But there is a twist, once you pick a girl and your instant win amount is revealed, you will be offered the chance to change your mind and pick the other girl. However, the prize may be bigger or smaller than the one you currently have, so choose wisely.

Bonus Spins Feature – Three or more of the nightclub scatter symbols on Bangkok Nights will trigger the bonus spins round for you. Allocating you with 12 spins initially to play through, with a x3 multiplier awarded on every win. The pick a prize feature can be triggered from within the bonus spins as well, giving players a little something extra in their bonus round. To top it all off you can retrigger the bonus spins too, with no limit on the number of times it can be done.

Bangkok Nights is a fast, furious game offering sumptuous delights from the bustling city. The two features work well together and the fact that you can activate one from within the other is genius thinking on the developers part. If you want to entice your players, give them something to keep playing for and that has certainly been done here!

Wins come very often in the base game, which is good because that bonus spins round is difficult to trigger. But by way of recompense it does seem to be easier to land the pick a prize feature. On the whole Bangkok Nights is enjoyable and a bit of a fresh look for the games in this genre, which are usually more centred around temples and mountains.

The Legend of Olympus

April 15, 2019 Boku Slots Comments Off on The Legend of Olympus