Our next character is well known for turning people to stone, yes you guessed it it’s the venomous Medusa. Thanks to NextGen Gaming we can safely view and play alongside her in the Medusa 2 slot game, which is actually a sequel. Now for us sequels in slots can be hit or miss, so we are excited to see what NextGen have done with this theme and character. 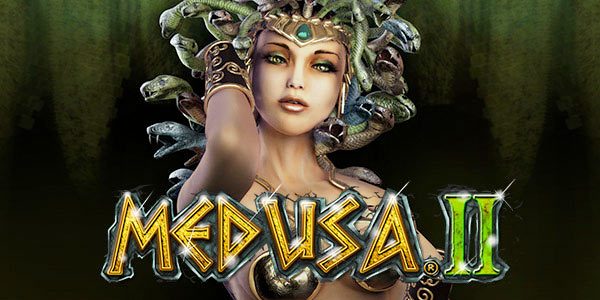 Play Medusa 2 on any of these top casino sites;

Medusa 2 is a 5-reel, 243 ways to win slot that offers a snake bite of an RTP at 95.18%. The slot itself is set inside a temple design and surrounded in ruins and darkness. Of course, that’s just what you would expect from this Greek gorgon theme, but even the music is ominous and adds an extra depth to the game. High paying symbols in Medusa 2 include a helmet with a snake, a viper amulet, a stone warrior, a quiver of arrows and a golden ring. Lower symbols are taken up by card values and include A, K, Q, J and 10, all of which look carved from stone with a Greek design lent to them.

Bet Amounts – Betting begins at 25p per spin and can be increased up to £50 per spin in Medusa 2.  You can either adjust your bet with the coin stack at the left corner of the reels or hit the cog icon and change it there. Make sure you are happy with your stake before hitting the spin button, because there is no going back.

Wild Symbol – Medusa herself is the wild symbol and she has a fun animation when she forms part of a win. She will substitute for all other symbols except the scatter and is also the highest paying symbol in the game. Land 5 of these in a winning combination to receive a x500 coin win. 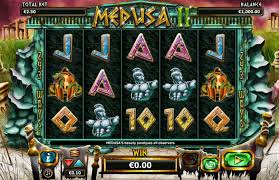 Scatter Symbols – The Medusa 2 logo is your scatter symbol, as well as triggering the bonus game you will also be awarded scatter wins too. Land three or more of the scatter symbols anywhere on the reels to trigger the bonus feature. Scatter wins are paid on top of line wins and offer the following:

Turned to Stone Feature – At any point in the base game a soldier may appear to try to beat Medusa. She will of course turn him into stone and whatever reel he is on will become totally wild. Any wins will then be recalculated and added to your balance.

Medusa’s Locked Reel Feature – This feature is available in both the base game and the bonus spins. At random on any spin, reels 2, 3, 4 and/or 5 will lock together as they spin. When they stop the reels that are locked together will all have matching symbols, creating one huge win.

Bonus Spins Feature – After landing three or more of the scatter symbols anywhere on the reels you will enter the bonus spins feature. Here you will be awarded with 10 bonus spins initially but there is the chance to extend your spins. To add extra spins to your round you just need to land three or more scatter symbols anywhere on the reels again. There is no limit to the amount of times the extra spins can be won inside the bonus round, so keep your fingers crossed for those scatter symbols. Luckily for you, Medusa’s Locked Symbols feature is active within the bonus spins. This means that you have even more chances of landing those extra scatters needed.

Medusa 2 is a great sequel game which doesn’t try to live up to its predecessor. Some of the features are similar in nature. But they have been upgraded which again makes the game stand out as being individual, instead of as part of a franchise. Wins occurred often in the base game, but the features were a little harder to trigger. So, if you are wanting quick game play with instant bonus features, then this may be one you want to pass on. If you have some time to spare and a sustainable balance, then those features will come if you are patient enough.