Welcome to the world of fairy tales and happy endings. It is the age-old story of a princess and a frog, and a kiss that seals their fate. Well, that’s enough romance for us, the team at Boku Slots aren’t much for fairy tales but we are a sucker for a good slot game. Eyecon have turned their hands to many themes and this latest one Enchanted Prince is based very loosely on one such bedtime story, how it plays out is anyone’s guess. 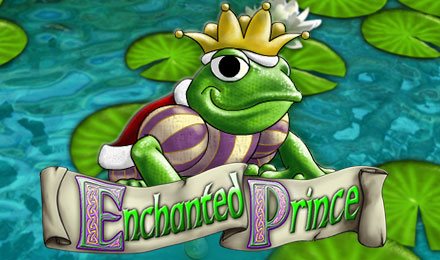 Play Enchanted Prince on any of these top casino sites;

Enchanted Prince is a 5-reel, 25 pay line slot offering an RTP of 95% to anyone who enters its realm. A lily pond is the apt surroundings for this game, with a relaxing background of birds twittering away. That is until there is a win on the reels, when the old school slot sounds come into play and ruin the peaceful atmosphere.

When it comes to symbols, you have the high scoring ones being a castle, the princess, a heart, a lily pad and a water lily. The low scoring ones are the usual 9 to A icons you will find in other games.

Bet Amounts – Betting on Enchanted Prince begins at 1p per pay line in play, up to £2 per pay line in play with Enchanted Prince. If you are playing with all 25 lines active you are looking at paying from 25p per spin to £50 per spin. You can of course amend the pay lines active when you adjust your bet amount. But as with all games, the probability of bigger wins lies only with all lines in play, so be aware of this before you hit the spin button.

Wild Symbol – An opulent crown is your wild symbol and it will substitute for all other symbols except the frog prince scatter. If the wild forms part of a winning combination, the prize for that win will be automatically doubled. 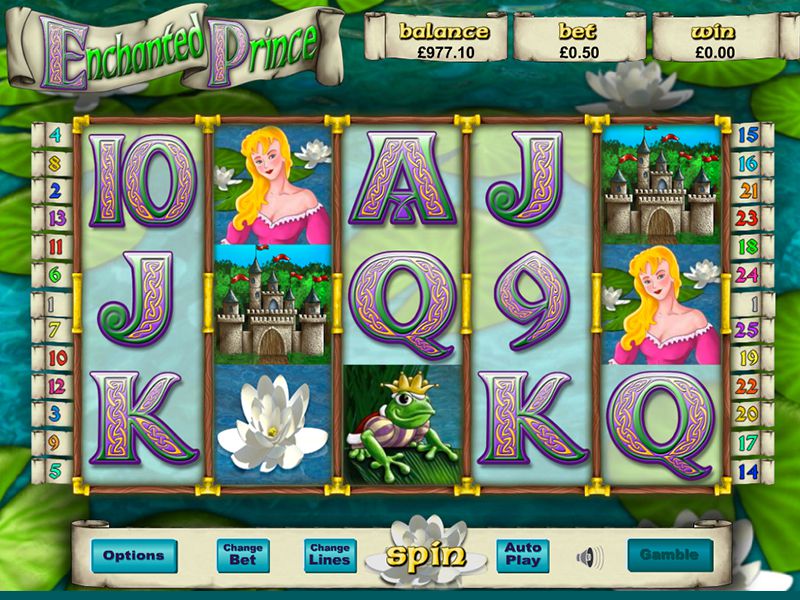 Scatter Symbol – The frog prince is your scatter symbol, you will see the frog transform into the prince when it forms part of a winning combination. Land 3 or more of the frog prince scatter symbols to trigger the bonus spins feature. Scatter wins are also paid on top of line wins, which are paid when 2, 3, 4 or 5 scatter symbols are on the reels. You can be awarded with x2, x3, x4 and x5 your bet amount with scatter wins, meaning that frog really is your Enchanted Prince in disguise.

Bonus Spins Feature – Upon landing three or more scatter symbols you will be taken to the bonus feature, where you will be allocated spins according to the number of scatters you had.

Bonus spins can be retriggered during the feature, up to a maximum of 15 times per feature entry. So, every time you enter the bonus spins, you may have the chance of continuing the feature 15 times. This can prove to be very profitable if you are lucky enough to do so.

In the past Eyecon have kept things as simple as possible with their games and we found that Enchanted Prince was even more so. A few extra bonuses or randomly triggering features could easily have been interwoven into this theme, making it much more enjoyable. However, we found that once the feature starts, it kicks up the excitement a notch or too; but not by far. The game itself is endearing enough with its graphics and animations, but just wasn’t attention grabbing enough to hold us for long. We do look forward to seeing what else comes from the Eyecon library, as so far the fairy tale has been more of a poison apple than it first appeared.