Any game that has the words kingdom and wealth in the title are instant attention grabbers. After all that’s what we all want isn’t it, our own little Kingdoms of Wealth. Luckily for you Blueprint Gaming have developed a slot aptly named to bring us our hearts desires! Kingdom of Wealth offers a multitude of features including a level up progression which is always fun to play. 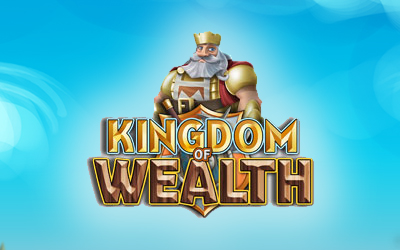 Play Kingdom of Wealth on any of these top casino sites;

Kingdom of Wealth is a 5-reel, 30 fixed pay line slot offering a war waging RTP of 95.30%. Your reels are set to spin above what looks like a battle ground, with the castle in the background. Symbols take their inspiration from medieval designs and even the lower value symbols have been spruced up a little. Higher value symbols include the games logo, a shield with a pig, a crest with lions and a shield with crossed swords. Lower values are the card symbols A, K, Q, J and 10 and all have had little crowns, crests or diamonds added to them.

Bet Amounts – Betting on Kingdom of Wealth begins at 50p per spin and can be adjusted up to a whopping £250 per spin. You will see the bet amount at the left of the reels with arrows above and below it. Click these arrows until you are happy with the stake amount shown.

Wild Symbol – A gold gauntlet is your wild symbol and it will substitute for all other symbols except the bonus symbols, of which there are three. It does however also double as your highest paying symbol, offering a huge x1000 coin win for landing 5 of them in a winning combination.

Bonus Symbols – There is no scatter symbol in Kingdom of Wealth but there are three bonus symbols, the queen, the monk and the barbarian. Each one has a little extra surprise to add to the game. There is a set of extra reels to the left of the screen which are called the queen reel, the monk reel and the barbarian reel. Each bonus symbol unlocks these reels for extra chances of winning.

Level Up Feature – On commencing Kingdom of Wealth for the first time you will be told you have unlocked serf rank. The aim is to level up your character and eventually become king of the realm. As you move up there will be extra surprises in store. 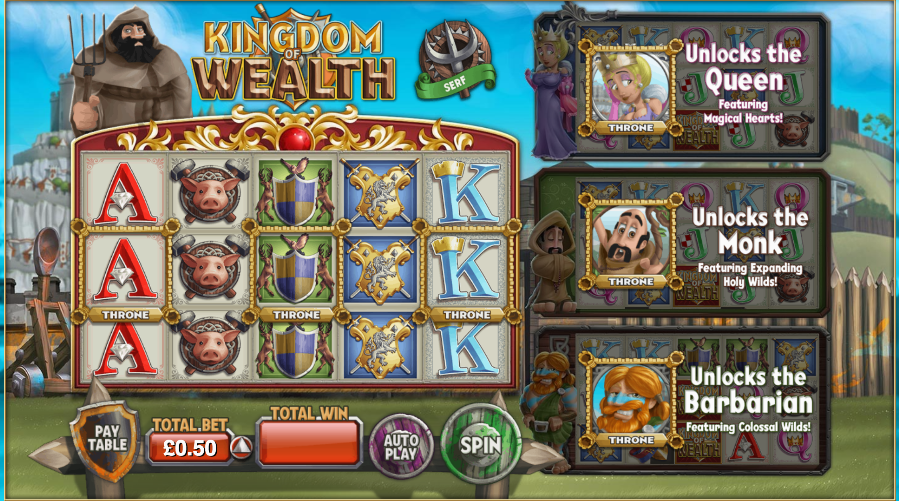 Each level can only be achieved in order, so if you are at Commoner rank and trigger the battle bonus (discussed later on) you will not rank up to king. Whilst the level up option is a fun addition, it doesn’t save your progress like other games of this nature. So, when you finish your game it resets your level when you resume play another day.

Throne Bonus Features – This is where it gets really good, because you will notice that on the centre row on reels 1, 3 and 5 there is a golden square. This is the throne room and if you land a queen, monk or barbarian symbol in these special spaces you trigger the relevant feature.

Battle Bonus Feature – To trigger this you need to land a queen symbol, monk symbol in throne and barbarian symbol on reels 1, 3 and 5. They need to be have landed in the throne spaces on the centre row in order for it to trigger. Once this happens you enter the battle bonus round and will be asked to pick shields. Each one will offer either a multiplier, reel respin for one of the characters or a surrender shield. If you hit the surrender shield the round is over and you will be returned to the main game.

Royal Respin Feature – If you land any three matching symbols inside the throne spaces on reels 1, 3 and 5 you will trigger this feature. This offers a two-part mini game, the first part you will pick a shield again. Each shield will reveal a matching symbol and you keep picking until you hit the shield that says collect. Once you hit collect the reels will respin with all the matching symbols you picked on the reels.

Wow, what a lot to get through, Kingdom of Wealth seems complicated but honestly once you start playing it slots into place. Blueprint Gaming have developed a great game that is fun to play and will certainly have people flocking back. The only downside for us is the level up feature, because it doesn’t save your progress, so you begin at serf level every time you go back into the game. Not that the level up feature has any bearing on the game itself, but as it is there, we felt it needed a mention. You will hear lots of sounds as the game is in play from horses trotting, to church bells and birds. Now we didn’t mind this so much, but if it bothers you switch them off and enjoy the game in peace. Kingdom of Wealth was a little slow for our liking in that the bonus throne games took a while to spin through, so if it’s a quick play you are after then this is not the game for you. If you have time on your hands and like the idea of playing through the level ups, then you are in the right place.

Planet of the Apes

September 5, 2018 Boku Slots Comments Off on Planet of the Apes