Off we go on our next adventure, deep into the rainforest and in search of Aztec treasure. NetEnt have put together a great slot for the adventurer out there. Combining the chance to nudge and respin those reels which is always a welcome feature. Enter the Temple of Nudges and watch out for booby traps along the way! 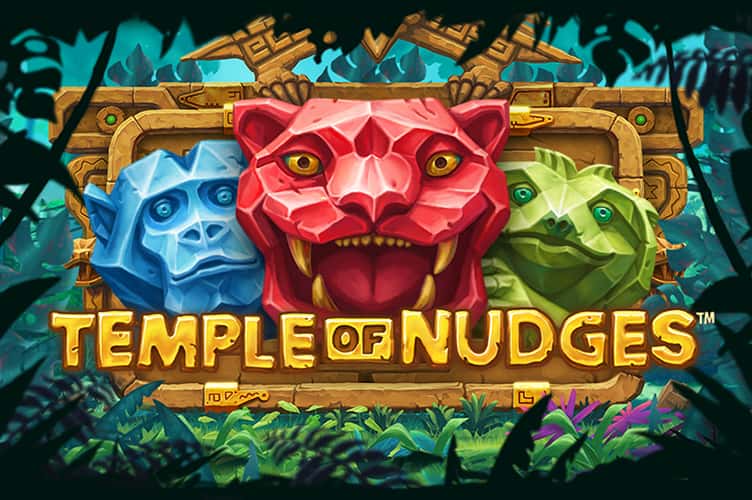 Play Temple of Nudges on any of these top casino sites;

Temple of Nudges is a 5-reel, 243 ways to win slot offering players an RTP of 96.03%. There is no standard pay line structure in this game. Instead the line wins are formed from left to right with symbols needing to be on adjacent reels. The reels are set inside an Aztec style stone carving and the symbols all look as if carved from stone too. In the background you will hear bird noises as the reels spin, with the occasional slot sound interspersed with it. Overall the backing sounds make for a very relaxed atmosphere and we found we preferred to keep the sound playing, as opposed to switching it off.

Bet Amounts – Betting begins at 25p per spin and can be increased up to £250 per spin. There are two options available when amending your bet amount. The first is the bet level found to the left of the spin button and the second the coin value found to the right. Use the plus and minus symbols to adjust your bet amount up or down until you reach the amount you wish to bet with.

Wild Symbol – NetEnt have decided to forgo the wild symbol in Temple of Nudges. Opting instead for a respin symbol which will be explained further below.

Scatter Symbol – There is no scatter symbol either, but don’t let this put you off. Temple of Nudges has x2 features available that do not require a wild or scatter symbol to trigger them.

Temple of Nudges Feature – Triggering after winning, the spin the nudge feature allows the reels to automatically nudge down. Your win will first be awarded for the line that just occurred, then the reels will be nudged down by one position. If a new winning combination is made the nudge will trigger again. This will continue until no new wins land via the nudged reels. This feature is pretty awesome considering it occurs after every single winning spin.

Respin Feature – This is only available during the nudge feature, if a respin symbol lands after a nudged reel has occurred then it gets interesting. The way it works is simple, all symbols matching those in the winning combination will be held in place, whilst the remaining reel positions respin. If any new matching symbols are added you will receive the pay out from the new win and then the nudges will continue. Meaning you are essentially getting an extra spin out of the nudge feature without having to pay for it.

Temple of Nudges is certainly an interesting take on what can be an overdone theme. NetEnt have made sure that they have given you something to get your teeth into with it though. Turning what could have been a boring game into something quite the opposite. Wins come thick and fast which is good because that’s how the feature is triggered. The nudge feature is something we have seen before but usually it comes with a cost, so to see it applied in this game as an unpaid feature is amazing. Add to that the extra respin option and that just ups the stakes of this game when you compare it to others.