Welcome to the witching hour here at Boku Slots, with an interesting take on a witch’s cave. Frog Grog Slots is set up as if you are standing at a cauldron, making a special brew from the potions on the shelves. Thunderkick Games have outdone themselves with the graphic design on this one. 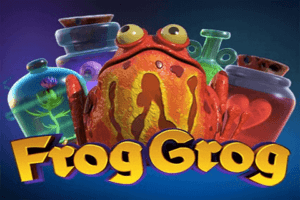 Play Frog Grog on any of these top casino sites;

Getting down to the basics, Frog Grog is a 5-reel, 23 fixed pay line slot game that has an RTP of 96.10%. On top of that there are a couple of interesting features included, which we will delve into further in this review. We have to admit the sound track is slightly off putting, but remember there’s always the mute button.

Bet Amounts – Betting begins from 10p to £100 per spin and as this is a fixed pay line game, there is no other adjustments that can be made. This makes play simple and in most cases affordable.

Wild Symbol –  The wild symbol is the interesting looking frog, who will substitute all symbols that will make a winning combination. Once the win is paid, the symbols involved will be removed from the row and column that spans from his square. This in turn will activate the dropping symbols feature. 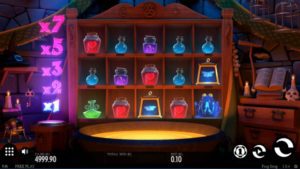 Other Symbols – There are no scatters here in Frog Grog and just 7 symbols, and obviously you already know about the wild. The other 6 symbols in order of highest to lowest paying are the butterfly jar, rose in a jar, heart jar, purple jar, green jar and the blue jar.

Dropping Symbols Feature – This essentially means that when symbols are removed from the reels by the frog wild, new ones drop into their place. It can potentially increase your wins and it also activates the multiplier, which moves up a step after each set of symbols is dropped in succession.

Mystery Game Feature – Triggered randomly on any non-winning spin, it will remove all symbols except the butterfly, frog and rose. This will allow for new symbols to drop into place. The symbols removed also award a win up to a x5 symbol count.

Frog Grog is a really easy game to play and the features are not as intricate as others within the Thunderkick library. But that doesn’t mean it’s not as fun or exciting to play. The graphics are interesting and the RTP means that the pay outs are triggered easily and often enough to compensate for the lack of bonus games or scatters.