Glow Slots is another masterpiece from the geniuses over at NetEnt, so Boku Slots knew this was a game worth trying. As you can imagine from its name, be prepared for a bright, attractive theme.

Play Glow on any of these top casino sites;

When it comes to the basics, Glow is a 5-reel, 15 fixed pay line slot game that has an RTP of 96.70%. We found it hard to distinguish the theme chosen by NetEnt, but it appears to be a combination of the Northern Lights with a nod to native American culture. You will see symbols depicting animals, across a backdrop of the great outdoors and illuminated sky. 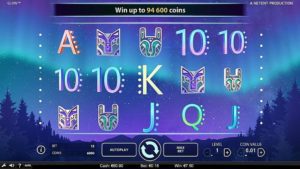 Wild Symbol – The wild is a pink bear mask and any win that it completes will be multiplied x2. It also substitutes for all other symbols in the game.

Other Symbols – Your other symbols are made up of (in descending order) the deer, wolf, fox, owl, snake and then the letters A, K, Q, J, and the number 10.

Bonus Spin Feature – This is triggered in the base game and not by a scatter or bonus. Instead you need to complete a combination of the five higher paying animal symbols. Every time you form a combination, you will be awarded between 1 and 5 extra spins and all wins during the round will have a x2 multiplier attached. More spins can be triggered during your bonus spins round and this time they can also be triggered by the lower paying symbols as well.

Overall Glow is a pretty, ethereal game, which is played with relative ease as there are no complicated features or an overload of bonus games to get your head around. This can be seen as a negative point by some, but for those that prefer simplicity it’s ideal. Add in the fact that the bonus spins feature is triggered within the base game, which makes it an ideal starter game for anyone who hasn’t played slots before.

That being said, for those that have played many slot games before, this may also be a breath of fresh air due to the ease of play and the relative lack of strain on budget. With spins costing as low as 15p it is a great all-rounder in our books.