You may think you knew all there was to know about the story of Moby Dick! But there is so much more to the tale and the team at Microgaming have made it their mission to update each and every one of you. Join Captain Ahab as we go in search of this immense creature and the treasures that await in the depths of his ocean home. 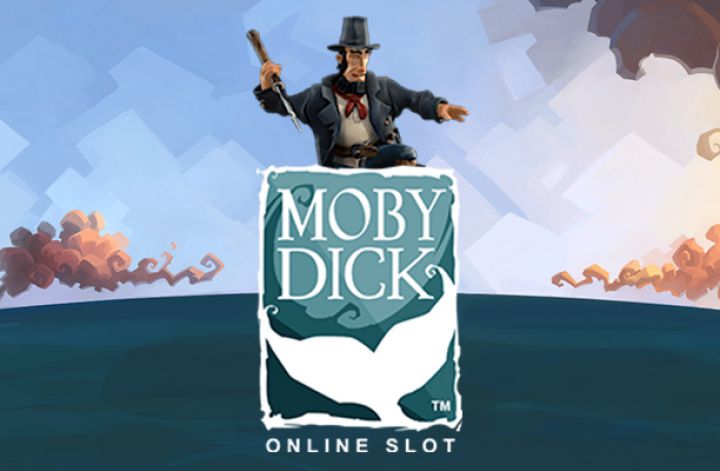 Play Moby Dick on any of these top casino sites;

Moby Dick is a 5-reel, 25 fixed pay line slot that offers a whale of an RTP which sails along nicely at 96%. Set against a raging ocean background, there are waves crashing at the reels and Captain Ahab poised harpoon in hand at the side waiting for the appearance of Moby Dick! A nautical tune plays along with the spinning reels, as well as the sound of the waves and seabirds all adding to the atmosphere.

All your symbols have a seagoing connection with the lower symbols looking like they are made from the side of a ship and including your usual card denominations of A, K, Q, J and the 10. Higher symbols include a stein of beer, an anchor, Captain Ahab and of course Moby Dick is right up there too.

Bet Amounts – Betting begins at 25p per spin and can be adjusted up to the maximum of £50 per spin. This makes Moby Dick one of the more affordable games for players and we think it certainly contributes to the appeal of it.

Scatter Symbol – Moby Dicks gigantic mouth is the scatter symbol. Land four or more of that gaping chasm anywhere on the reels to trigger the bonus spins round.

Freezing Wins Feature – What we love about Microgaming is their interesting additional features. In Moby Dick this is called freezing wins, and it is an awesome extra. Every time you land a winning combination of 3 or more matching symbols, those symbols will freeze in place for a bonus respin of the remaining reels. On top of holding in place the matching symbols, any scatter symbols on the reels will also freeze as well. Now you are realising just how good this is aren’t you?

On the bonus respin if any more matching symbols are added to the existing ones held in place, they will then all be held again for another respin. This will continue until no new symbols are added to the sticky wins already on the reels. Your win is then calculated and will be added to your balance. If you land 4 or more scatter symbols, you will be taken to these at the end of the respin feature. This gives you plenty of time to build up extra scatters to expand on your bonus spins allocations.

Bonus Spins Feature – Gain four or more mouth scatter symbols to trigger the bonus spins. This can be easily achieved as a result of the amazing freezing wins feature. Bonus spins allocated are all dependant upon the number of scatters on the reels when the feature triggers.

Freezing wins is also activated in the bonus spins round and you can retrigger the feature from within the bonus round too. Also, during this round up to 3 wild symbols can appear at the same time on reel 3 only, helping to complete bigger wins. The wild will also contribute to freezing wild combinations too. This means entering the bonus spins can potentially be very rewarding for players.

Wow, we certainly don’t mind thinking about a seafaring lifestyle now after playing through that game. Microgaming have excelled themselves with Moby Dick, it could have been a flop and sunk to the bottom of the ocean. But instead it has risen high to ride the waves and bring along with it all of the fortunes from below. Players will enjoy frequent base game wins at any bet level and the fact that the bonus game triggers easily and can be retriggered, will certainly bring smiles all round. We didn’t expect the game to have much going on with the theme, but Moby Dick has won us over. We had hoped for maybe a whale hunting themed feature game, but we aren’t complaining too much because that freezing wins feature certainly makes up for it.