It is off to tranquil Scandinavia we go, in search of a band of more peaceful Vikings than we are used to. IGT have once again lent their design skills to the Viking theme, but this time they’ve given it a bit of a twist. Nordic Heroes follows the tale of two main characters which the game is based around. Join Thora and Ragnar as they attempt to carve out a life in the Scandinavian setting, having to battle at times with creatures instead of each other. 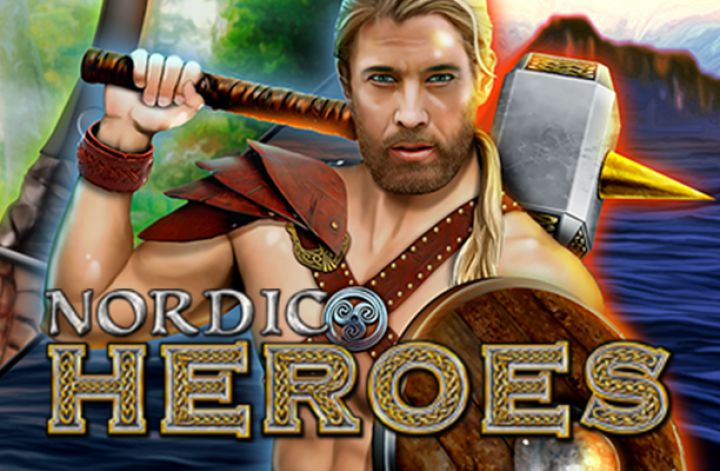 Play Nordic Heroes on any of these top casino sites;

Nordic Heroes is a 5-reel, 30 fixed pay line slot, that offers intrepid adventurers a variable RTP of 93.02% to 96.34%. There are many facets to the game including character narratives, levelling up options and of course the creature battles. But, before all that begins you need to get a lay of the land.

Nordic Heroes appears to begin in the midst of a Scandinavian forest, lush foliage is in the background and the reels spin transparently above. As the story unravels and you move through different settings, the background changes along with the levels, so watch out for that too. Symbols include the characters Ragnar and Thora, an arrow, an axe, an eagle, a wolf, a tree, mushrooms, berries, silver and bronze coins. When you enter the bonus rounds the mushrooms, tree, berries and coins are replaced with gemstones.

Bet Amounts – Betting on Nordic Heroes begins at £30 per spin and can be increased to a mammoth £900 per spin! Now this may well be where some of you fall away as £900 is a huge amount but remember there are still wins to be made at the £30 mark and with the variable RTP these can still be profitable wins.

Wild Symbol – The wild symbol in Nordic Heroes is the word wild within a Scandinavian shield design. It substitutes for all other symbols except the battle bonus symbol and any of the animal or wild symbols within the battle bonus. It is also the highest paying symbol offering a x1500 coin win for landing 5 of these in a winning combination.

Battle Bonus Symbol – Depicted by the word battle with crossed swords behind it, this symbol triggers a very interesting three step feature game. Land 3 of these on reels 1, 3 and 5 to trigger the feature. You will also receive a x2 multiplier on your bet amount as a bonus win at the same time. Nothing like getting double the benefits for one single lay out is there? 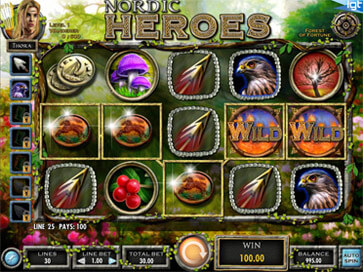 Mystery Multiplier Feature – If your interest has not been piqued yet, how about this? At any point in the main game of Nordic Heroes, as long as the battle bonus hasn’t triggered this feature can occur. On any spin the reel can turn into a mystery reel and will offer a multiplier of between x2 and x30 the win amount. This is dependant also on the level of your current character too, the higher the level the higher the multiplier.

Levelling Up Feature – You will begin the game as Thora and at the wanderer level. The aim is to level up your character and to switch between Thora and Ragnar. You will see at the side of the reels the level gauge for the character you are currently playing as. In order to level up you will need to gain XP from winning the battle bonus rounds. For those of you that don’t play console or pc games, XP is basically points that you earn from winning battles against the creatures. As you earn more points (XP) you will level up your character. But as you progress you will also unlock the second character and the other area of the game.

Battle Bonus Feature – This is where it gets really interesting on Nordic Heroes, because having landed 3 of the battle bonus symbols you will enter the arena. You will see a health meter next to your character and one next to the creature you are battling. You will have bonus spins for as long as you have health in your meter. Once your health runs out the round ends and you are returned to the main game. As you beat each creature and move to the next one, the multiplier on the wild symbols increases. Beat all three of the battles and you will be awarded an allocation of between 1 to 10 extra spins to play. This will be decided depending upon your character level, which location you are in and how many spins it took to win the last battle. However, you will be given extra wilds and multipliers for these victory spins, so all is not lost.

The joy of Nordic Heroes is that your progress is stored as you go along. This means that if you decide to stop playing for any reason, the next time you log in to the game you can pick right back up from where you left off. So, although there is a lot going on and a lot to follow, you aren’t having to start from scratch every time. It is almost like playing a console game except this time you can win real cash! IGT have taken slot games to the next level with this one and we love it. Whilst we have attempted to give you as much detail as possible, be sure to familiarise yourself with the pay table if this is going to be a game of choice. It’s well worth swotting up as there is also back stories to the characters and areas, along with in-depth knowledge on the level abilities and more besides. If you are into platform gaming, then Nordic Heroes is definitely going to be a firm favourite.