You may want to hold your breath as we dive to the bottom of the ocean for this impressive game. There’s an octopus that has all eight of its tentacles wrapped around the treasure that we need to recover. Brought to us from the master game designers Microgaming, let’s check out the ferocious Octopays. 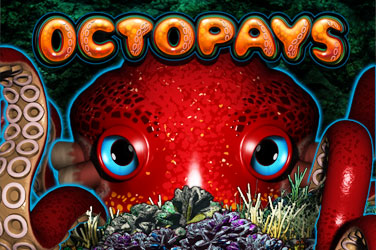 Play Octopays on any of these top casino sites;

Octopays is a 5-reel, 243 ways to win slot offering you deep sea divers an RTP of 96.23%. The game is set against an under the sea backdrop, with a sunken ship in the distance. The reels look like they are surrounded by driftwood and have a mixture of card suits, sea creatures and sailing symbols. Higher value symbols include a treasure chest, divers mask, hammerhead shark and an anchor, with lower values including the A, K, Q, J, 10 and 9 symbols. Unfortunately, instead of having some nice under the water sounds to match the theme. There is a shrill sounding track playing along that is somewhat distracting. Our advice would be to switch it off if you want to fully enjoy the game for what it is.

Bet Amounts – Betting on Octopays begins at just 30p per spin and can be increased to £3.00 per spin. That’s right just £3, making this game one of the better options in the lower stakes groups and clearly why people are flocking back time and again. It is easy enough to amend your bet by simply adjusting the arrows on either side of the bet amount section, which is to the left of the spin button.

Wild Symbol – A cute little orange octopus is your wild symbol in Octopays and he will only appear on reels 2 and 4. He also doubles up as your scatter symbol too, after all why have multiple symbols when one can do the same job. 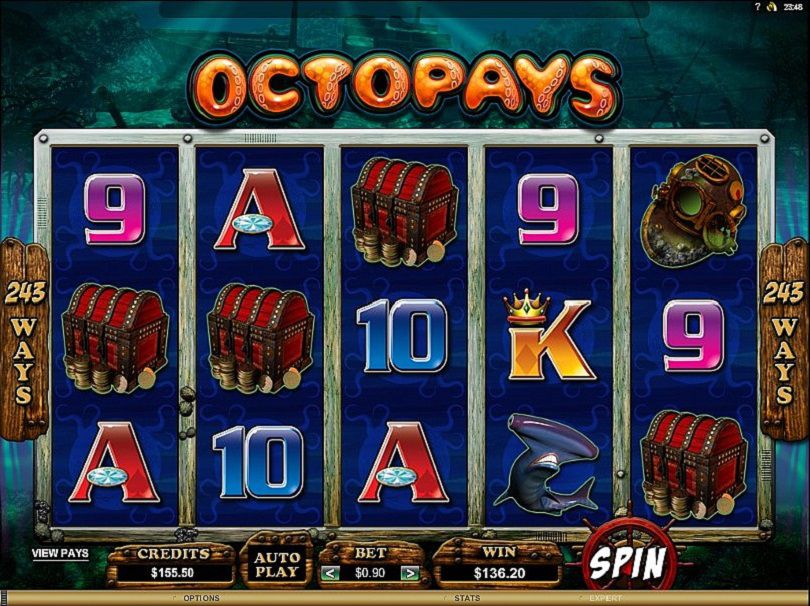 Scatter Symbol – As mentioned above your octopus wild symbol also doubles as your scatter symbol. This means that by landing him you will not only enjoy the completion of any potential wins on the reels. But if he lands on reels 2 and 4 simultaneously, then you will trigger the Kraken Feature too.

Kraken Feature – Now, to trigger the feature on Octopays you will have landed an octopus wild symbol on reels 2 and 4. An allocation of 12 bonus spins will now be awarded and there’s a little twist too. Keep an eye out for the kraken, because before every spin he will add between 1 and 4 octopus wilds to reels 1, 2, 4 and 5. These will help complete any wins on the reels and hopefully some big wins too. But once the reels have spun you may be lucky enough to land a kraken symbol on reel 3. If so, he will then squirt ink at any of the octopus wild symbols that are forming part of a win, turning them black and awarding a x2 multiplier to that win! Who said Krakens were bad news, not us, we love to release the Kraken, well in this game at least!

Whilst Octopays doesn’t offer a lot by way of extras, it still is a great game to play. The sheer simplicity of it and the fact that it isn’t overly expensive to spin the reels even at the maximum stake, is a huge draw for many slot players. Add to that the fact the feature triggers fairly regularly, then you are definitely going to want to give this slot a try.

Microgaming have done well here considering there is always the chance you can go too over the top with games of this theme. But sometimes less is more and that is certainly the case here, as we found ourselves playing along for quite some time without getting bored. Wins happen relatively often in the main game, usually coming in at the lower end of the pay-out scale which can be disappointing. But they happen just often enough for us to not really noticed it with our balance. Obviously, the bigger wins are more preferable, and they did occur, just not as much as we would have liked. However, trigger that kraken bonus feature and that’s where your bigger money lies. With between 1 and 4 wilds added at the beginning of every spin and the kraken multiplying any wins that are formed with the wilds, Octopays is definitely the place to be.

September 19, 2018 Boku Slots Comments Off on Warlords: Crystals of Power

December 22, 2018 Boku Slots Comments Off on Adelia the Fortune Wielder