Hounds have been the creative muse for many people over the years, including the team at Microgaming who have developed the interestingly titled Hound Hotel. Basically, it is a hotel for dogs and the game is built around their escapades, which should make for interesting game play. 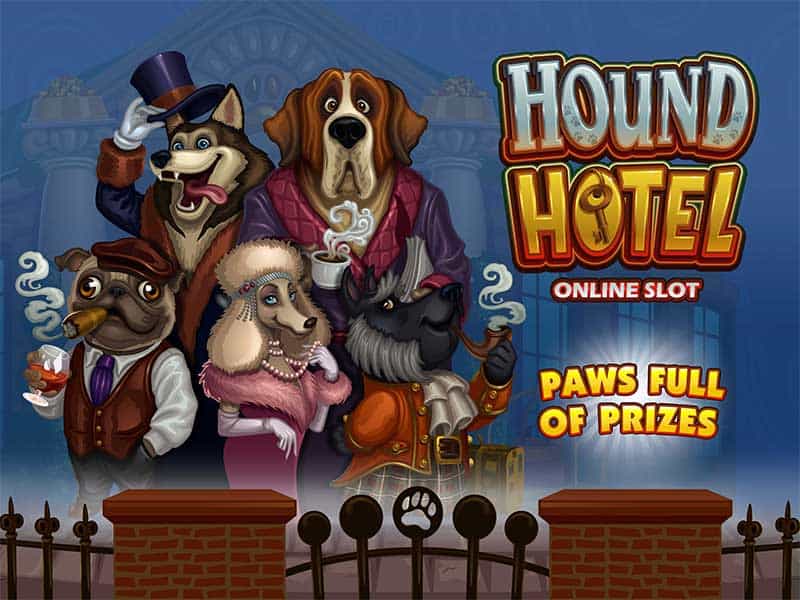 Play Hound Hotel on any of these top casino sites;

Hound Hotel is a 5-reel, 25 fixed pay line slot offering an RTP of 96.25%. On first opening the game you will see the reels are set inside a luxurious mansion, complete with tall pillars and golden dog bowls adorning them. All the higher paying symbols are different types of pampered pooches. These include a St Bernard, a Husky, a Poodle, a Scottish Terrier and of course a cheeky Pug. Lower value symbols take form in the card denominations of A, K, Q and J, which was a bit of a let-down as we would have loved to have seen some more dog themed symbols thrown into the mix.

Another negative point for us was the sound/music tracks playing along whilst the reels were in play. Now we weren’t expecting to be serenaded with a version of ‘hound dog’, or any other such dog related ditty! But the noisy crowd sounds and retro tinkles just didn’t seem to gel with the overall theme of the game, for us at least we had to switch it off.

Bet Amounts – Betting on Hound Hotel begins at 25p per spin and can be increased to just £37.50 per spin. In order to amend your bet just use the plus and minus symbols on either side of the bet amount until you are happy.

Wild Symbol – Your wild symbol is the Hound Hotel logo and it will land stacked on all reels. It will substitute for all other symbols except the scatter. There is also a second wild symbol in play here and it forms part of a second chance feature called the dashing wilds. It is just the word wild on red background so watch out for that.

Scatter Symbol – The hotels bellhop, a chihuahua carrying a platter is your scatter symbol! It can land anywhere on the reels and you need to have three or more in view to trigger the bonus game. Scatter wins are in play here too so land anywhere from 2 to 5 scatters in view to bag an extra win on top of your line win.

Dashing Wild Feature – Occurring at random after any non-winning spin, this feature gives players a second chance. The dashing wild symbol will drop in at random in x3 spaces on the reels, in an effort to create a win for the player.

Hound Hotel Feature – Land three or more of the Chihuahua Bellhop scatter to trigger this feature. You will first be taken to a hotel style layout, on which there will be three floors full of doors to choose from. 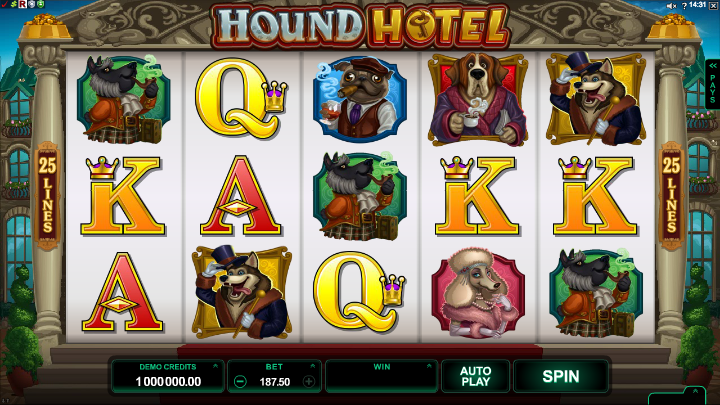 Floor 1 – Choose one of the doors on floor 1 to reveal one of the features below:

Floor 2 – Choose one of the doors on floor 2 to pick your multiplier for the game:

Floor 3 – Choose one of the doors on floor 3 to pick your bonus spins allocation:

Hound Hotel is a fun packed, fast paced game offering players a healthy RTP and a couple of great features. There are some negative points to bear in mind, but they are more of a niggle than a problem. The background sounds and music are a total write off for us and we had to turn them off, but once we did the gameplay was smooth and enjoyable. There was so much effort put into the overall design of the game that the lower value symbols also let us down a little, as we would have loved to see some more creativity go into that side too. But again, not a huge issue as it didn’t affect the gameplay at all.

Overall the game offered a few interesting ways to win big, especially in the Hound Hotel feature. We loved having control over which doors we picked to gain our bonus game. Wins came thick and fast in the base game too, but it did take a while to trigger the features. The Dashing Wilds feature was the hardest of all to land, but there are lots of main game wins to make up for it.