Thunderkick Games has developed an almost magical, mystical slot to keep players entertained. The Rift is set in a cobbled backstreet and your job should you choose to accept, is to play to win of course. 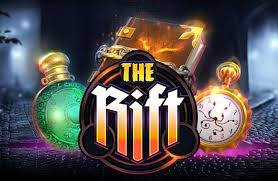 Play the Rift on any of these top casino sites;

The Rift is a 5-reel, 17 fixed pay line slot with a mysterious 96.30% RTP on offer and two very interesting features. Your reels are transparent and spin away whilst the eerie cobble stoned alleyways trail off into the murky distance. Symbols all take inspiration from the magical realm, such as a spell book, potion bottle, a watch, gold coins and for some reason a purple octopus!

Bet Amounts – Betting begins at 10p per spin and can be increased to £100 per spin. Amend your bet amount by clicking onto the casino chip and selecting your stake amount.

Wild Symbol – A purple pentagram with the word wild inside is of course your wild symbol. It will substitute for all other symbols except the bonus. It also shares the spot for highest paying symbol alongside the spell book, so land 5 of the wild or spell book to win a x3000 coin win. 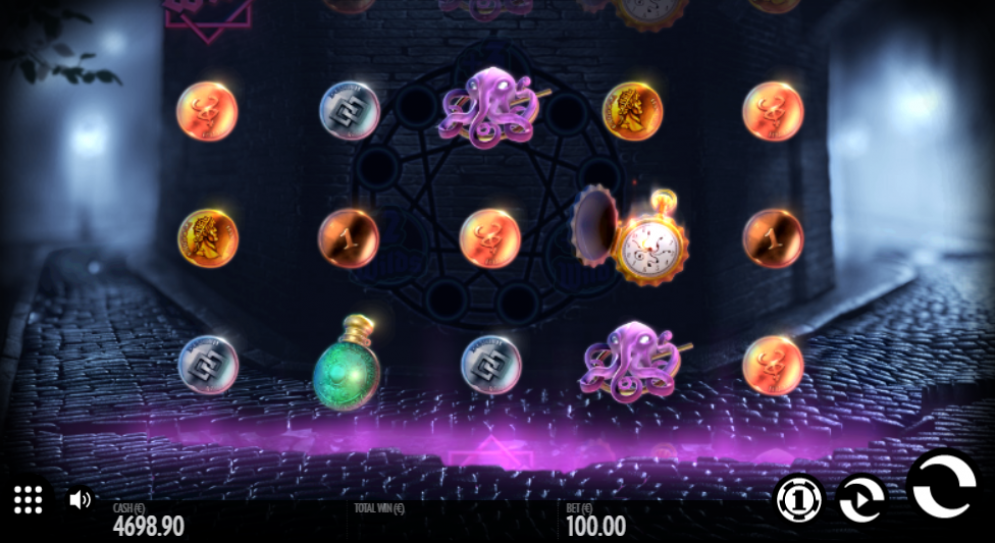 Bonus Symbol – The Rift has a special symbol that triggers both the Rift Spin and the Bonus Spin features. Depicted by the games logo your bonus symbol, you will need three or more anywhere in view for one feature and 2 in view for the other.

Rift Spin Feature – By landing 2 the Rift symbols you will activate the rift spin feature. Here you will receive a respin of the reels with up to x3 wilds added to the reels.

Bonus Spins Feature – Land 3 or more of the Rift bonus symbols and you will be allocated a set of bonus spins as shown below:

Whilst the bonus spins feature is in play any wilds will become sticky wilds, until they form part of a winning combination. Any additional bonus symbols that land during the round will fill up the rift meter on the screen. This will award extra spins and wilds helping to create more wins for you as you go.

The Rift is an interesting game on the face of things, however something was missing for us in regards gameplay. Thunderkick Gaming have designed an almost perfect game, but it could have done with an extra feature in our eyes. That being said the game ran smoothly and the two features it does have work well. But essentially, they are just the same feature split in two. Wins came often enough to keep us distracted from the negative points and the overall design was good too. If you love Thunderkick games then you will possibly love this, but for us the Rift was more mishap than magical.