Animal themed slots can go one of two ways, decidedly dull or full of potential. This next slot is loosely based around the Bald Eagle and the symbolism it brings to the American culture. Now join us and Microgaming as we fly on the Eagles Wings, hopefully picking up some native American treasures along the way! 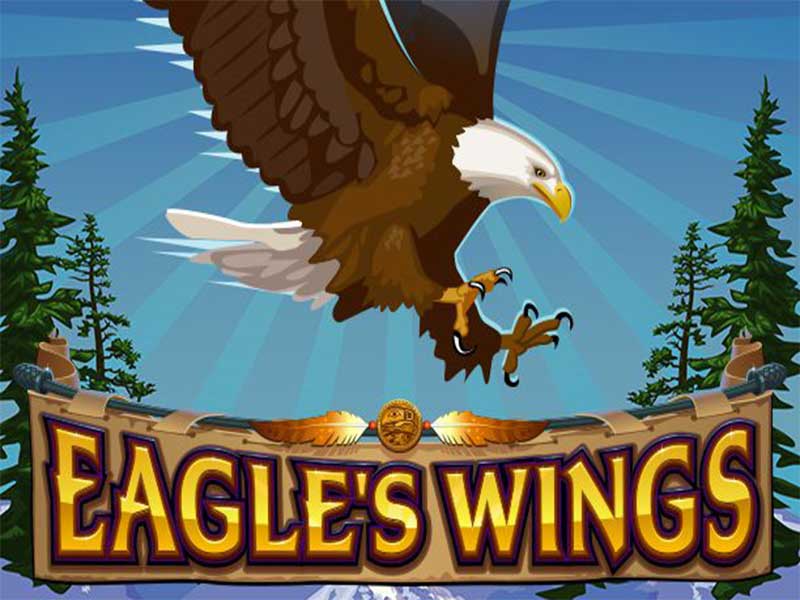 Play Eagles Wings on any of these top casino sites;

Eagles Wings is a 5-reel, 25 pay line slot with an epic RTP of 96.47%. Your reels look almost as if they form part of a totem pole, with the wings of the eagle proudly hovering at the top. Symbols all link into the theme nicely and have some great animations when they form part of a win. The music that accompanies the game seems more fitting for a tv drama than a slot game, and even the slot machine sounds are down played too. Higher value symbols are depicted by the Bald Eagles head shot, a flying image of the eagle, an eaglet in its nest and a salmon jumping out of the river. Lower values are depicted by the A, K, Q and J symbols from playing cards, each one has a group of eagle feathers attached to it in some way.

Bet Amounts – Betting on Eagles Wings begins at 1p per line in play and can be increased up to £2.50 per line in play. This means that spins can vary in cost from 1p per spin up to £62.50 per spin. In order to find your preferred bet, you can change the amount of lines you have active, the cost per line and the value of the coin.

Wild Symbol – Your wild symbol is the Eagles Wings logo and it will substitute for all other symbols except the scatter. If you are lucky enough to land 5 of the wilds on an active pay line, you will bag yourself a whopping x1000 your bet amount. Making your wild the highest paying symbol in the whole game!

Scatter Symbol – A gold coin engraved with the eagle’s head is your scatter symbol. It can land anywhere on the reels and you only need 3 or more to trigger the feature.

Stacked Wild Feature – Eagles Wings offers players a stacked wild feature in the main game only.  This means that when a wild symbol lands on the reels it can cover more than one position, giving the player more chances of completing any potential wins on the reels. Also, anytime a stacked wild helps form a win, it will also award a x2 multiplier to that win as well.

Bonus Spins Feature – Having landed 3 or more of the eagle coin scatter symbol on the reels, you will trigger the bonus game. Here you will now be given a choice of gold coins to pick from, each one offering a number of spins behind it. The number of coins you can choose is dependent upon the number of scatter symbols you had on screen when the feature triggered. So, 3 scatters would equal three-coin picks, 5 scatters mean 5-coin picks. In total there is a maximum of 60 bonus spins up for grabs spilt between all the coins. Once you have chosen your coins and collected your spins you will now play through them. There is a x3 multiplier awarded to all wins during this round and there is also the possibility to retrigger the round again from within.

Eagles Wing is a pretty generic slot game and one that is easily played without having to put too much thought into. That being said it is not a game that you want to dismiss too easily either. Wins happen very often within the main game due in part to the stacked wild feature. But, once that bonus feature hits, that’s where you will find the bigger wins thanks to the x3 multiplier! The joy of the bonus feature is that you don’t need all 25 lines active in order to ensure you can trigger it. The scatter symbols can land anywhere in view, meaning you can trigger the feature even with 1 pay line active. This makes things much fairer to all players in our eyes and bumps Eagles Wings up further into our favourites list.