After our first visit to the world of Avalon, we were excited to see what the sequel had to offer. So, of course Boku Slots made the perilous journey back in time for you and we loved what we found. The original game was very basic, but we loved it for that. The new version aptly named Avalon 2 has much more to it and Microgaming have really pushed the boat out feature wise. 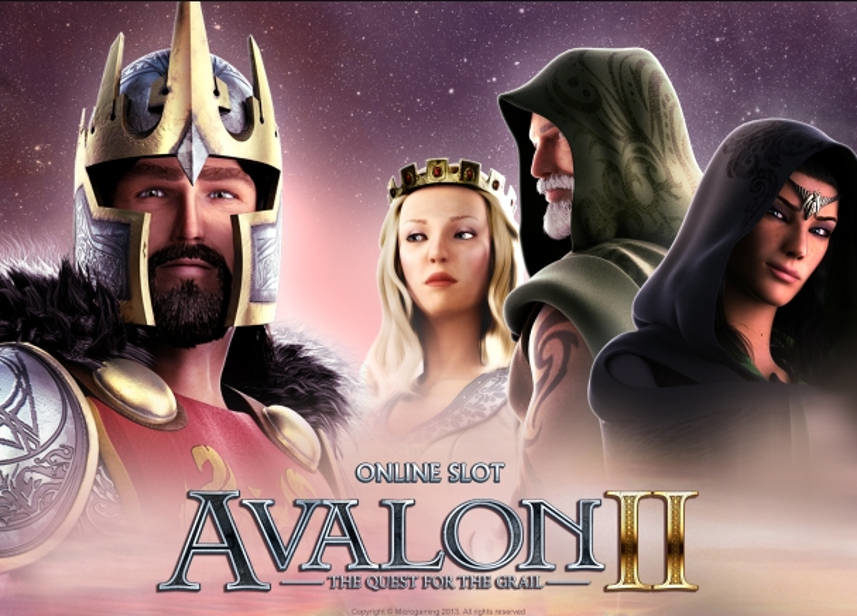 Play Avalon 2 on any of these top casino sites;

Avalon 2 is a 5-reel, 243 ways to win slot with a few added twists. As you can see a lot has changed in the realm of Avalon since the first game was created. Not only have the ways to win increased, but the RTP has risen as well to a massive 97% for players.

Bet Amounts – Betting on Avalon 2 begins at just 30p per spin and it only increases to a maximum of £7.50 per spin. This means you are getting 243 ways to win for a maximum of £7.50 making it super affordable. However, if you need to you can adjust both the coin amount and the coin level, to reduce or increase the bet between the minimum and maximum before each spin of the reels.

Bonus Symbol – The bonus symbol in Avalon 2 is depicted by the Holy Grail cup and boy oh boy does it bring the bearer some luck. In order to trigger the multitude of bonus game options within the Grail bonus, you need to land three or more grail symbols on the reels and they can be anywhere not just on a winning combination. 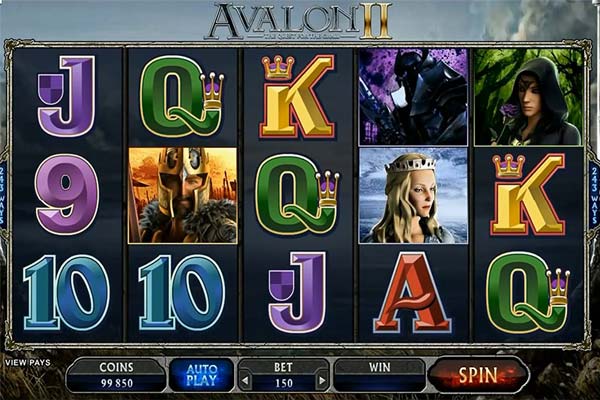 Grail Bonus Feature – As we said above, land three or more grail symbols anywhere on the reels to trigger this feature. The way it works is as follows, you will enter the grail bonus and play the first of many mini games. Each time you trigger the bonus feature on Avalon 2 you head into the next mini game, until you have completed your quest for the Holy Grail. The mini games are shown below in the order they will be played in:

Dusky Moors – You will be given the choice of helmets on the screen. The aim is to find a matching pair to win the feature. For every incorrect choice made, the multiplier increases for the final prize. So, although you want to win by finding the matching pair, you could also do with a few incorrect picks to increase your prize too.

Whispering Woods – Pick one of five shields on screen to reveal a prize and you can keep this prize or change it by picking another shield. However, you only get to pick 3 times, so be sure of what you are doing.

Forest Falls – With this you get 20 bonus spins as well as something called trailing wilds. This is a twist on the expanding wild, in that it will appear at the top of the reel and trail downwards to fill the reel and then it will remain in place for one more spin. The wild is the Avalon 2 logo and will only appear on reels 1 or 2 in this feature.

Merlin Feature – At any given time, Merlin will appear at the bottom of the screen and will give you either a very handsome cash amount or a prize multiplier. What we love about this is how animated Merlin is and its addition really gives the game a little magical boost.

Well, what more can we say about this impressive slot game? The fact they have tied in some of the old features with the new is brilliant, as it means it will appeal to players of the original game and attract new players too. We loved that the grail bonus takes you on a little journey each time it is triggered. The addition of Merlin too was a stroke of genius and we can see why players of all ages and player abilities love this game. Despite the many features in Avalon 2 it is still really easy to play through and let’s not forget the whopping 97% RTP either.

The Legend of Shangri-La

September 14, 2018 Boku Slots Comments Off on The Legend of Shangri-La

Phantom of the Opera

April 28, 2018 Boku Slots Comments Off on Phantom of the Opera