It’s time to head back to the Ming dynasty, or somewhere thereabouts for our next slot. This theme in general has a great appeal to many, mainly for the oriental riches that can be uncovered whilst remaining in the comfort of home. Developed by Eyecon it is based around Shi Huangdi who in history is considered to be a mighty emperor of China. Does he have what it takes to protect his realm from treasure hunters such as you, that is the question? 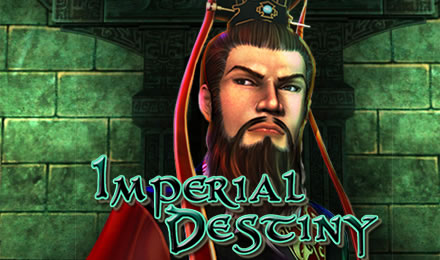 Play Imperial Destiny on any of these top casino sites;

Imperial Destiny is a 5-reel, 25 pay line slot that offers a not so healthy looking RTP of 95.30%. But don’t worry too much about that as having played through the game ourselves, there are a few treats in store to make up for that low value. All of the symbols have an oriental theme to them from the higher values which include a gold hair comb, a golden orb, gold bracelets, jade bracelets and armour. Right through to the lower symbols which include a red plaque, a white pendant, a bamboo scroll and a carved box. There is one minor let down for us and that is the silence with which the reels spin and then the occasional sound or a burst of music when a feature is triggered. This was incredibly off putting and makes for very lack lustre gameplay.

Bet Amounts – Betting on Imperial Destiny begins at 1p per line in play and can be increased to 50p per line in play. This is the only adjustment you can make, other than the amount of lines you wish to have active. So, spins can cost from just 1p per spin up to the maximum of £12.50 per spin if all lines are activated. We told you there would be a reason to keep going, didn’t we?

Wild Symbol – Shi Huangdi the emperor is the wild symbol on Imperial Destiny and he will substitute for all others except the scatter and the prize pick. He will only appear on reels 2 and 4 throughout the main game. But if he lands and contributes to a win that prize will be doubled!

Scatter Symbol – A pair of iron cattle bells are your scatter symbol in Imperial Destiny. Landing 3 or more of these anywhere on the reels will trigger the feature. This is a great twist as it means you still have a chance of triggering the feature if you aren’t playing all lines. 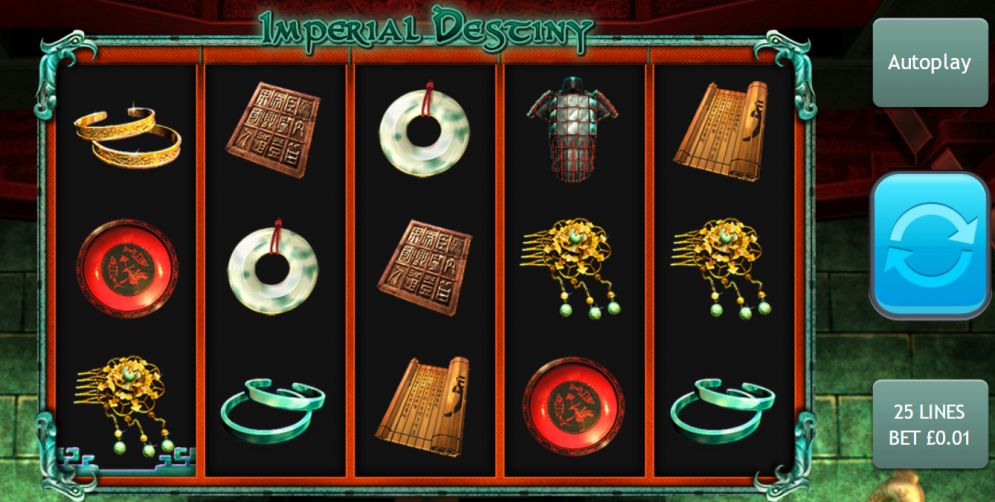 Prize Pick Feature – Just when you think things couldn’t get any better on Imperial Destiny, there is the Prize Pick feature to contend with. Triggered by landing three or more stone soldiers anywhere on the reels, you will be given the chance to pick your prizes. Each reel will transform into a stone soldier and behind each will be a prize multiplier. How many soldiers you landed dictates the number of prize picks you get from 3 to 5. Pick your stone soldiers wisely as each one will have a random multiplier behind it ranging up to x100 the stake amount.

Bonus Spins Feature – Landing three or more of the cattle bell scatter symbols will trigger the bonus spins round. The number of scatters you land will determine the amount of spins you are allocated.

During the round the wild symbol will now appear on reels 1, 3 and 5 instead, and will become an expanding wild to help create bigger wins. Bonus spins can be retriggered from within the feature up to a maximum of fifteen times, if you are lucky.

Imperial Destiny is a great game, maybe a little lacking in the extra’s department but the features it does contain are passable. For a game that is fairly affordable to play, the wins happen often in both the main and the bonus spins. We triggered the prize pick feature on a few occasions, but that x100 multiplier was always just out of reach. That being said the prize pick was still a fruitful round and something we enjoyed as it was all down to our own choice. If you are looking for a game that has some bite to it then Imperial Destiny isn’t the one for you. However, if you are looking for something easy that can while away the time without much damage to your pocket, then you should really enjoy this slot from Eyecon.

August 6, 2019 Boku Slots Comments Off on Atlantis: City of Destiny