If you like to play fantasy themed multi-level computer games, then this next slot is definitely for you. If, however you don’t then you may still want to give this a try, as it is something you won’t have played before that’s for sure. Enter the world of Cloud Quest and play along with the three main characters, as they level up and reveal treasures within the realm. Play N Go are the slot developers and a lot of design and thought has gone into this game that much is clear. 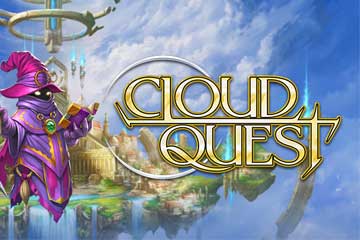 Play Cloud Quest on any of these top casino sites;

Cloud Quest is set out somewhat different to other slots and is played on a 5×5 grid style reel and operates an avalanche style symbol drop. It offers all quest goers and RTP of 96.52% and some very interesting features to keep you occupied. The reels are set out to look like they are floating with cities and mountains joining them, making a fantastical landscape for you to view. To the left of the reel you will see a character, but they change every so many spins and underneath is a level meter telling you what level each one is at. To the right above the spin button is a kind of emblem that fills up with power and awards bonuses. Symbols vary in form, with higher values taking the shape of the three main characters and lower values being a sword, knives, sceptre, shield, vial of liquid, spell book and an orange/black stone.

Bet Amounts – Betting begins at 10p per spin and can be increased up to a maximum of £40 per spin in Cloud Quest. To adjust your bet, you will see a scale running along the bottom of the reels. You can move it up or down using the plus and minus signs, until you are happy with your selection.

Wild Symbol – Cloud Quests wild symbol is a golden engraving of a bird with the word wild on it. It will substitute for all other symbols and will appear anywhere on the reels. You will also see that it is your highest paying symbol and the winnings received will change as the stake does, so be sure to check the pay table out.

Winning Wild Feature – Every time you land a winning combination of three or more matching symbols on Cloud Quest, you will activate this feature. The combinations can be horizontal, vertical or diagonal it doesn’t matter, as long as there are three or more symbols involved. Once the win has landed, the centre symbol will then turn wild and the rest of the combination will be removed from the reels. The symbols above will then drop down into the gaps and new combinations will be formed. 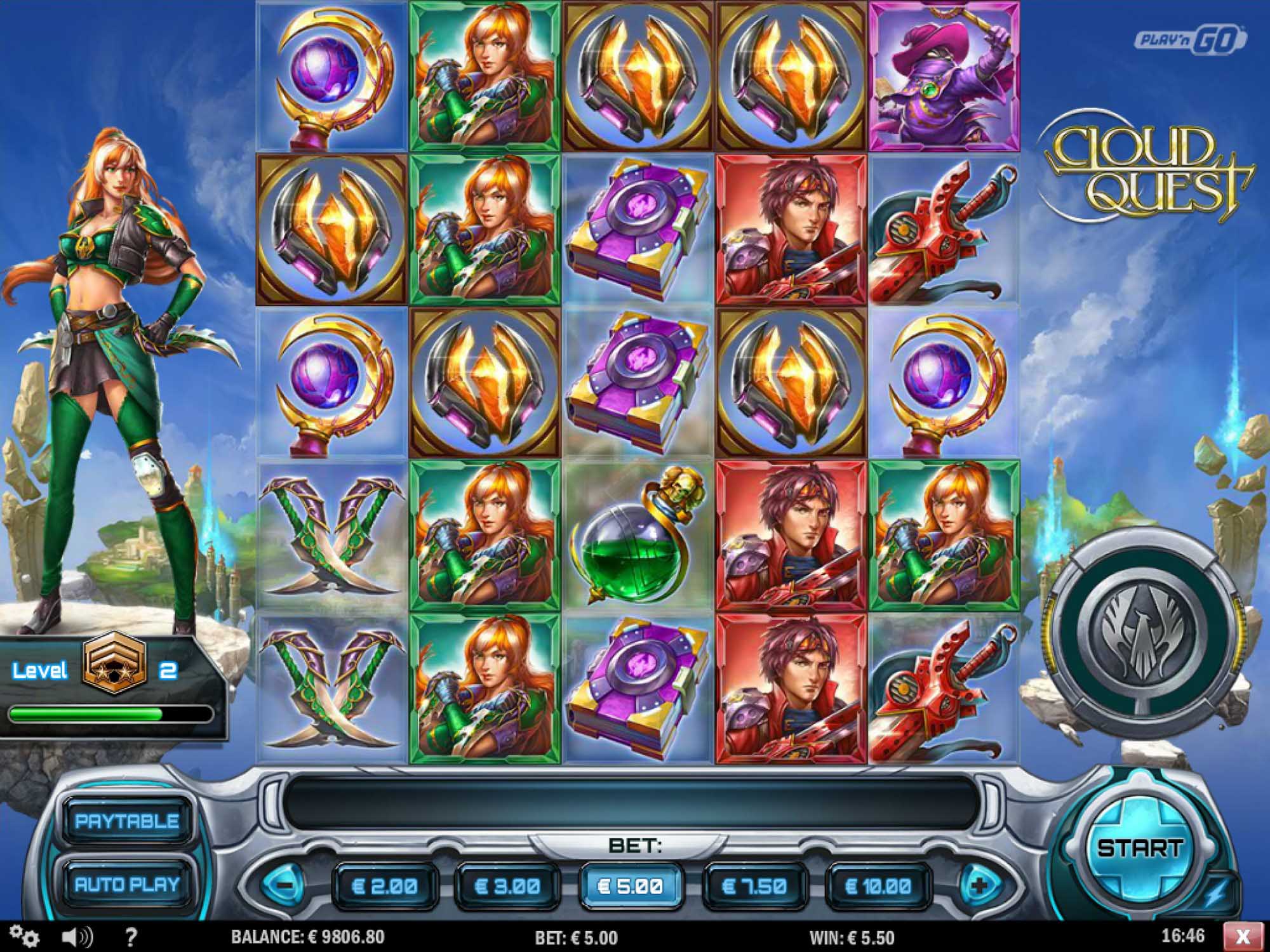 Power Respins Feature – As there is no scatter symbol as such in Cloud Quest, there needs to be a way to trigger some respins. That is where the orange/black stone symbol comes into play. It is known as the power stone in this game and triggers this feature. You will need to land a combination of 3, 4 or 5 of these symbols to activate it.

As they land you will light up a section on the power meter at the right of the screen and it will start spinning. There are 10 sections on the power meter to fill up, the more you have lit the better chance you have of landing a spin with a power active. As winning combinations are removed you may land more power stone symbols, meaning more chances of filling up the meter. If it lands inside one of the yellow lit up sections, you will trigger a single respin of the reels with one of the four following features activated.

Bonus Game Feature – This is an interesting addition to an already feature packed game. If you manage to uncover enough symbols so that the word bonus is revealed below, then you will enter the bonus spins round. The trick here is that the bonus word moves up and down the reels on each spin at random, so it isn’t in the same place every time. It means you need to clear the symbols from forming winning combinations on a single spin; sounds impossible but it is achievable.

Once you have uncovered the word you will be taken to a new screen with a smaller set of reels comprising of just 3 reels and 1 row. The character that was in play on the spin is now on your left and a demon on your right. This is where you level up your characters. As you enter the round you will be allocated between 5 to 20 spins. Your job now is to defeat the enemy and increase your characters level.

To defeat your opponent on Cloud Quest you need to land winning combinations, with every win removing a life from the monster you are fighting. Each monster you defeat increases your level XP and awards x3 extra spins to your total. This is where the slot game has been combined with a console game in a way. XP is level points, so each time you strike a winning blow against the monster you will be given points. Those points will rack up and when you have earned enough, you will increase your characters level. This is for those of you who like to have something to track your progress, more than anything else. You will be happy to know that your progression is logged here, so if you decide to stop playing and come back at a later date your levels are saved.

There is an awful lot going on within Cloud Quest and we can’t help but wonder why this hasn’t been turned into a console game. However, in a way we are glad, as this is an awesome game to keep you occupied. For those that like games which log your progression, this is defiantly for you. Thanks to the setup of the reels the power stone lands fairly often and triggers that meter, meaning you get the single respin of the reels more often than you would think. Even the bonus spins round triggers more often, thanks to the avalanche style of symbol removal on normal spins.