If you haven’t heard about the person this slot is based on, then you must have been living under a rock. Boku Slots would like to introduce the icon that is James Dean, and to thank the team at NextGen Software for creating a slot that is very loosely based on the legend himself. For those of you that don’t know, James Dean was a famous actor best known for his part in Rebel without a cause, whom was tragically struck down in his prime. 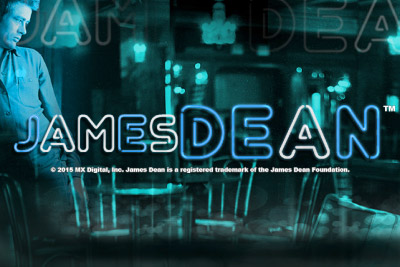 Play James Dean on any of these top casino sites;

James Dean is a 5-reel, 25 fixed pay line slot, which offers an RTP of 95.42% for players. James himself stands off to the left hand side of the screen, whilst the reels spin with symbols relating to the star. Images such as his walk of fame star, iconic sunglasses, motorbike and car all make up the symbols needed to win big.

Bet Amounts – Betting begins at 25p per spin and can be increased to the maximum of £62.50 per spin. This can be adjusted by hitting the up or down arrows either side of the coin icon, at the bottom left of the screen.

Wild Symbol – James Dean on a blue background makes up your wild symbol. He substitutes for all other symbols except the two scatters and the clapper board, which only appears in the feature game. He will also only land on reels 2, 3 and 4, but if you land three symbols on those reels at the same time you will trigger the wild respins feature.

Wild Respins Feature – As we mentioned earlier landing three or more James Dean wild symbols will activate the Wild Respins feature. Here you will be allocated three spins with an expanded wild on either reel 2, 3 or 4. All prizes won during this round will be subject to a x3 multiplier as well.

Bonus Spins Feature – Having landed three or more-star scatter symbols, you will enter the bonus spins feature. During this round you are allocated 10 bonus spins with a x2 multiplier on all wins. You will notice that a clapper board may randomly appear on the reels, these are your Legend Spins and will award up to x3 extra spins per board that lands.

Legend Spins Feature – Only played within the bonus spins and dependent upon clapper board symbols landing. Up to 3 spins per board are allocated and at the end of the bonus spins, are then played. Any wins made during legend spins are subject to a x5 multiplier.

James Dean Bonus Feature – Landing three or more pink James Dean symbols will activate the pick me bonus. This can be played in the main game or in the bonus and legend spins feature too. The three James Dean symbols will hover above the reels and you will need to pick one. Each one has a prize amount behind it and one has the words Win All. If you pick the win all symbol, then you bag all three prize amounts, but if you don’t you only win what was behind the symbol you chose. There are different multipliers for the prizes depending on which game you are playing, when the pick me bonus is activated:

Whilst we expected more from such an iconic theme, we weren’t overly disappointed with James Dean. The game was easy enough to play and the features kept things interesting too. Wins came quite regularly in the main game, although it did seem hard to trigger the bonus features. All in all James Dean is a good go to game, if you have the time to spare waiting for bonus features to trigger.