If you love the feeling that Christmas brings and want to celebrate it all year round, then look no further. Play N Go have developed a very festive slot for those of you that suffer from Christmas withdrawals in summer. It is aptly named Merry Xmas and brings with it two very festive features to enjoy. 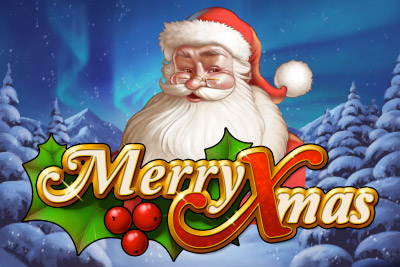 Play Merry Xmas on any of these top casino sites;

Merry Xmas is a 5-reel, 15 pay line slot that offers a tinseltastic RTP of 95.79% for players. It is set in a winter wonderland scene, with candles on either side and a lush snowy forest behind it and the reels spinning transparently against the backdrop. They are also filled with festive symbols such as baubles, candy canes, presents and even the big man himself good old saint Nick makes an appearance. There is a super festive soundtrack playing along as the reels spin, which makes the game feel very Christmassy indeed!

Bet Amounts – Betting on Merry Xmas begins at 1p per line in play and can be increased up to £1.25 per line in play. So, plays can cost anywhere from 1p per spin up to the maximum of only £18.75 per spin. Meaning Merry Xmas joins our affordable slot list, making it Christmas all year round. Amend your bet by hitting the three lines below the spin button, which expands the bet screen. There are three sliders that adjust the lines active, the bet per line and the coin value. Move the sliders up and down until you reach the desired bet amount per line in play and then hit the back button to return to the game.

Wild Symbol – There is a wild symbol in Merry Xmas, and it is depicted by a gold flash with a multiplier of either x2, x3, x4 or x5 on it. It will only appear on reel three and will substitute for all other symbols in the game except the scatters. It also has its own feature which includes those multipliers, so read on below to find out more.

Scatter Symbols – There are three scatter symbols in Merry Xmas, and they are the three wrapped presents. They are yellow, green and gold coloured gift-wrapped boxes and they will land only on specific reels. Although they don’t trigger a bonus spins feature when they land, they do trigger a special gift just for you. 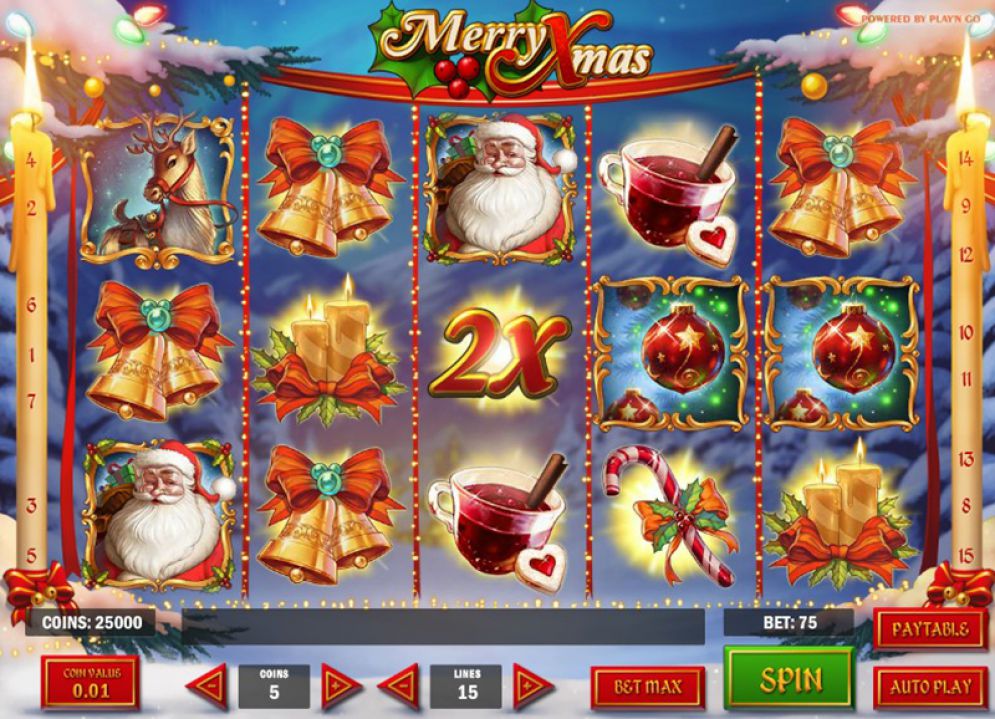 Other Symbols – Symbols in the game are a lovely representation of all things Christmas. High value symbols are Santa, Rudolph and the red bauble, with lower values being the bells, candles, apple cider and the candy cane.

Wild Multiplier Feature – When your wild symbol lands on reel three it will have a multiplier written on the front of it. If the wild symbol helps to form a win, the wild multiplier on the front will be applied to the win it has contributed too. The multipliers on offer are x2, x3, x4 or x5 the prize amount.

Gift Box Feature – As the game progresses you may well see some gift boxes dropping onto the reels. A yellow one will land on reel one, a green one on reel three and a gold one on reel five. But in order to trigger the gift box feature you need to land one of each colour boxes on its relevant reel at the same time. If this happens, the three boxes will float to the bottom of the reel and then you will get to pick one of the three gifts as your prize. Inside the gifts is a prize multiplier ranging from x2 to x150 your bet amount. Unfortunately, there is no reward given for landing just one or two boxes on the required reels, it’s all three on their respective reel or nothing.

Merry Xmas is a picture perfect representation of the whole spirit of Christmas. With snow, the gifts and of course the treats. It can be a bit slow where the wins are concerned, but once you start landing the wild symbol on reel three, things start picking up. The wild multiplier and gift box feature are certainly a welcome extra to an otherwise basic slot game and they do add a little bit of Christmas magic. Luckily the gift box feature can be triggered whether you are playing with one or all lines, as it only matters if you land the respective boxes on the right reels not on a specific pay line. So that is a little saving grace from the Play N Go team or call it an early Christmas present! Overall the game is quaint and beautifully designed, but we felt it was lacking that excitement factor which is something you’d expect with anything relating to Christmas.

Secret of the Stones

December 12, 2018 Boku Slots Comments Off on Secret of the Stones