If you go down to the woods today, you will be sure of a big surprise in the form of this next slot named Gemix. Developed by Play N Go, Gemix combines slot gaming with level up options and much more. It’s played out slightly differently to a normal slot game too, because it’s on a bigger grid and uses the cluster wins feature which will be explained below. 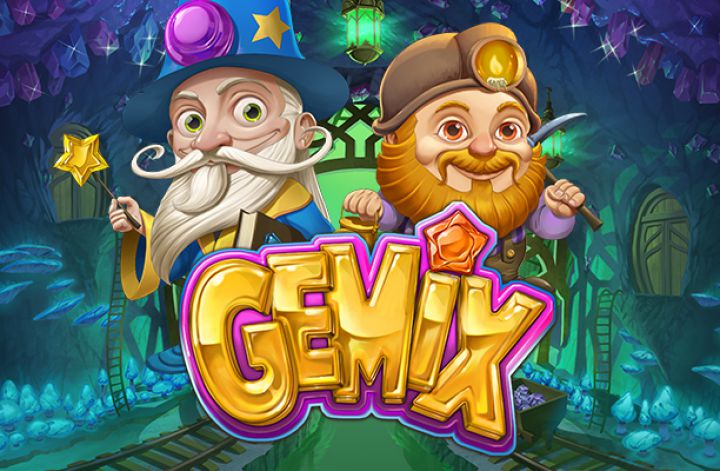 Play Gemix on any of these top casino sites;

Gemix is a slot played out on a 7×7 grid system and offers players an RTP of 95%. It has no set pay lines, instead offering wins for clusters of x5 or more matching symbols. It also offers an extra boosted win for completing each level known as worlds in this game. As well as this there is the avalanche style feature which you can read about below.

Your reels are inside various different settings, the first of which is underground in a mining village. These settings change on each new world that you reach as you move through the game. The symbols are all variations of gemstones, but there are no higher or lower paying symbols here. Instead the bigger the cluster you land, the bigger the prize pot you add to your balance. As Gemix plays you will hear a jaunty sounding music track, which certainly adds some extra fun to the slot.

Bet Amounts – Betting on Gemix begins at 10p per spin and can be increased up to £100 per spin. If you wish to change your bet amount, click the icon at the bottom of the screen that has three lines on it. This will expand the in-game details screen which has the bet amounts on it. Use the slider to move your bet up or down as needed, then just hit spin to return to the game screen and carry on playing.

Wild Symbol – There is no dedicated wild symbol that will drop onto the reels during normal gameplay. Instead the wilds in Gemix are determined again by the world you are currently playing on and these are called world wilds. These wilds will substitute for every other symbol within the game and also depending on which world you are on, has a little extra feature too. Read on below to find out more about the world wilds.

Scatter Symbols – Unfortunately there are no scatter symbols in Gemix either, but it’s definitely not going to be missed. There are some brilliant features in the game which more than make up for the lack of the scatter symbol.

Avalanche Feature – Alongside the cluster wins feature there is also the avalanche to look forward to. Meaning that every time a winning combination is made on Gemix, it is removed from the reels. This allows the remaining symbols to drop down and the gaps filled in with new symbols. If any further new combinations are made the avalanche feature carries on until no new matches are made and the game returns back to normal play.

Crystal Charge Feature – At the right side of the reels you will see a crystal ball. As each winning combination is formed it fills up the crystal balls outer meter with power. As soon as it reaches full capacity it will trigger at random one of the four crystal charge features. Full capacity is reached by collecting x20 or more gems in one spin, or consecutive avalanches. If you reach x40 or more symbols in a spin or subsequent avalanches, you will be awarded an instant x3 prize multiplier for that spin before the crystal charge feature triggers.

World Wilds Feature – You begin your game on world 1 and each world has x2 levels. After you complete the designated pattern match shown underneath the crystal ball, you move up to the next level/world. However, each world has its own special wild symbol and feature that it adds to the game.

There are just the three worlds to level up through and once you have completed world three, you carry on your game play at that level until you end the game. When you return to the game you will always begin at world one and move upwards, regardless of where you were when you last played the game.

Overall Gemix is super fun and really engaging to play, so it certainly has a lot to offer players. If having the cluster wins wasn’t enough, Play N Go added in the avalanche feature too which is where our ears perked up. Once we entered the game and began playing, we enjoyed the whole aesthetic of the theme. The one negative is that once you have reached certain levels and worlds, you don’t stick there if you leave the game entirely. This means when you start the game afresh you begin right back at world 1 level 1 and that’s quite frustrating. If your game is interrupted however by a server issue, then you will be placed back where you were at when the game was stopped. There are plenty of chances to win in this game and to be honest there is no need to bet higher to get those big wins. So, you can stretch that balance out for quite some time if needs be. Don’t take our word for it though, go and have a little look at Gemix for yourselves, we are sure you will love it as much as we did.