Most bars and clubs host some form of slot machine and our visit to this rather gloomy village shows us that even their local pub is no different. Although thanks to the team over at NetEnt this pubs only slot game is bound to be chock full of surprises. Enter the doors of The Wolfs Bane pub and meet all of the discerning patrons within. But be wary for this pub holds secrets and treasures too, but to win them you need to help the villagers beat the werewolves that lurk in the dark! 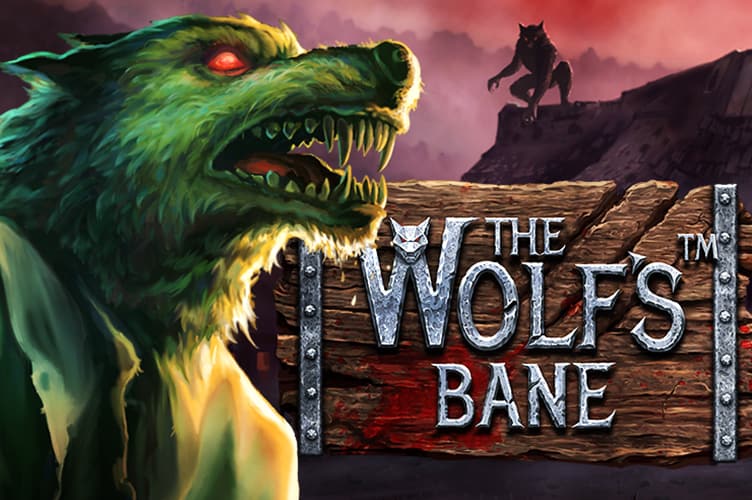 Play The Wolfs Bane on any of these top casino sites;

The Wolfs Bane is a 5-reel, 10 fixed pay line slot that offers players an RTP of 96.74%. Your reels float transparently against the backdrop of a mist ridden village, whose focal point is The Wolfs Bane pub! The game is full of creepy looking characters as your main symbols with a backup of the usual paying card symbols etched in silver.

Higher paying symbols are the gunslinger, nurse, gravedigger and the young girl. Lower paying symbols are the A, K, Q and J which are all in silver with intricate etchings across the front of them. In the background you will hear the howling of the wolves as they circle ever closer to the village. Alongside this is the eerie soundtrack that certainly adds to the gloomy atmosphere of the game.

Bet Amounts – Betting on The Wolfs Bane begins at 10p per spin and can be increased up to the maximum of £100 per spin. In order to amend your bet, you can use the arrows found on either side of the bet amount to adjust it up or down. Once you reach your desired bet amount just hit spin to continue with your game.

Wild Symbol – Your wild symbol in The Wolfs Bane is a half man half werewolf character. He has been caught mid transformation and has the word wild in the lower right corner. The wolfman will substitute for all other symbols to help create winning combinations, except for the scatter and the bonus symbols.

Scatter Symbol – The full moon symbol is your scatter here in The Wolfs Bane. Landing three or more of these anywhere in view will trigger the bonus spins feature.

Other Symbol – There is a bonus symbol in play here two and it is depicted with a moustached man with a crossbow. He will land on reels one, three and five only, but when you land three or more of this symbol on those reels you will trigger the pick and click feature. Read on below to find out how that feature works for you.

Pick and Click Feature – Once you land a crossbow bonus symbol on reels 1, 3 and 5, you will trigger this feature. You will now be given the choice to pick one of those three symbols you landed. It will reveal a prize win of between x5 and x50 your line bet amount as a win. Once you have made your choice the prize is revealed and added to your balance, so you may continue to play.

Bonus Spins Feature – Landing three or more of the full moon scatter symbol, will trigger the bonus spins feature. Here you will be allocated a number of spins, the amount of which will depend upon the number of scatters present when the feature triggered.

During the bonus spins you are awarded one of the four following in game features at random. These symbols will only appear on reels 1, 2 and/or 3 during the bonus feature and a new symbol will be picked at random at the beginning of every spin.

The Wolfs Bane is actually pretty cool overall, it has great graphics and some fantastic features. We would have liked to have seen a bit more activity built in, surrounding the theme of the game. This would have created that extra wow factor, but other than that we can’t really complain. Main game wins come along at a fairly regular pace and are a pleasant mix of low and high pay-outs. The crossbow bonus symbol that triggers the pick and click feature can take a little longer to trigger, due to it only landing on set reels; but it does happen from time to time. Getting into the bonus spins is a bit slow in happening too, but with 10, 20 or 30 spins up for grabs and some excellent random wild features, this is certainly the one worth waiting for.