Our next slot has a leading lady that should need no introduction, because we would like to take you on an adventure with the lovely Lara Croft. She can jump ravines, scale mountains and search for buried treasure as good as the next guy. But can she help lead you towards riches untold? Only time will tell in Lara Croft: Temples and Tombs from Microgaming! 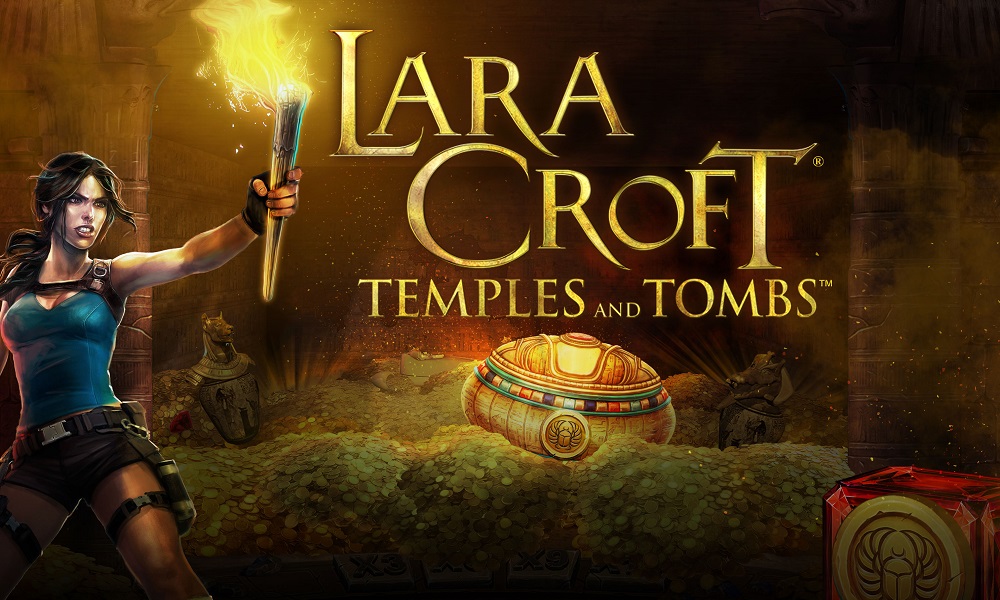 Play Lara Croft: Temples and Tombs on any of these top casino sites:

Lara Croft: Temples and Tombs is a 5-reel, 243 ways to win slot offering an RTP of 96.05% for you intrepid explorers. Offering players the unique avalanche free fall symbols during game play, as well as a chance at landing one of the three jackpots; there is a lot going on inside this game. As for the game itself, the reels are set out as if inside a tomb deep underground. Something that Lara has uncovered in her quest for riches. Symbols include all the usual archaeology type instruments as well as some Egyptian carvings too. Higher value symbols are the four different versions of Lara busting out of a golden circle. Lower value symbols are two Egyptian carvings of gods, a grappling hook, backpack, torch and a water bottle. As the game plays out there is a soundtrack in play, which would almost fit right into one of the more nerve-wracking part of the movies!

Bet Amounts – Betting on Lara Croft: Temples and Tombs begins at just 20p per spin and can be increased up to just £20 per spin, landing Lara’s game into our more affordable list. Amend your bet by using the plus and minus symbols on either side of the bet amount, until you are happy to hit spin.

Wild Symbol – A gold coin with a carving of a scarab of sorts is your wild symbol on Lara Croft: Temples and Tombs. It will only land on reels 2, 3 and 4. The scarab wild will substitute for all other symbols in the game including the scatter. Your scarab wild also plays a vital role in helping fill up those jackpots above the reels, read on further to find out how.

Scatter Symbols – Lara Crofts diary is your scatter symbol on Lara Croft: Temples and Tombs and landing three or more of these anywhere on the reels, will trigger the bonus spins. Luckily for you players, Microgaming decided to allow the wild to substitute for the scatter in this game! Will it work to your favour, you will have to read on to find out?

Avalanche Reels – You may have come across this feature in other games and if so, you will fully appreciate how awesome it is. However, for those that don’t quite understand what it means let us explain. When you make a winning combination on the reels, those symbols will be removed. New symbols will now fall into those positions and hopefully create more new winning combinations. Those symbols will then be removed and so on until no new combinations are created. What it means for you as a player, is multiple chances at landing new symbols on the reels from one paid spin.

However, there is something else in play here too. There is at the bottom of the reels a win multiplier moving from x1, x2, x3, x4 and x5. On each subsequent avalanche the win multiplier will move one step and be applied to any and all wins on the reels for that spin! 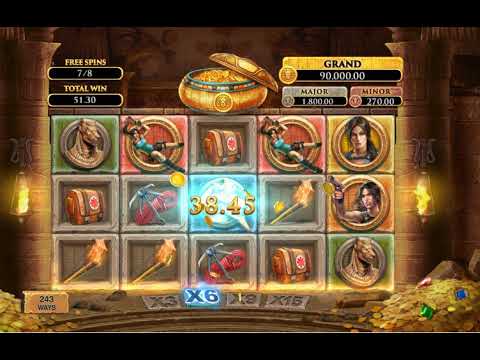 Jackpots Feature – When you enter Lara Croft: Temples and Tombs, you will see three jackpot amounts to the top right of the screen. There is the grand, major and minor jackpots up for grabs and this is how you do it. Each time a wild symbol lands it will throw some gold coins into the pot sat above the reels next to the jackpot amounts. Once that pot is so full it overflows, it will instantly award one of the three jackpot amounts showing. Meaning you could win anything from £3.00 to £100,000 depending on the bet amount you are playing at and which jackpot has been awarded.

Bonus Spins Feature – Having landed three or more of the scatter symbol or a combination of x3 scatter/wild symbols, you will trigger the bonus spins. You will be awarded with 8 spins to play through and your win multipliers are increased. Now on every consecutive avalanche the multiplier runs from x3, x6, x9 and finally x15, so there are some big wins to be made inside the feature. The wild symbols also still contribute to the jackpot feature here too, meaning you are always chipping away at getting closer to the big money win. The bonus spins feature can be retriggered from within the round as well, by landing three or more of the scatters or the scatter/wild combinations.

Despite just having the one main feature, there is still an awful lot going on in Lara Croft: Temples and Tombs. It does take some time to trigger that all important bonus spins round, but as you will have read above there’s good reason. They don’t want to make it too easy for you to win that gold away now do they. But once inside the bonus spins you are in for a treat with the increased multiplier, the active wilds and of course the chance to still trigger the jackpot win as well. Let’s not forget that thanks to the avalanche feature the main game wins are fast and furious too, making the wait for the bonus spins that much easier to bear. Add to that the overall feel to Lara Croft: Temples and Tombs with the voice overs from Lara herself, to the thudding of the stones as they land and the Egyptian themed backing track, there is lots to keep you entertained. Microgaming have definitely done the Lara Croft franchise a favour in creating such a great game and we hope you enjoy it as much as us.