We have all heard of the tale of Snow White and the Seven Dwarves. Now, its time to sit back and have IGT tell us their version of the story with the ever-lovely Miss White. If it is the happy ever after you are looking for, the romantic tale of Snow White is the place to be. 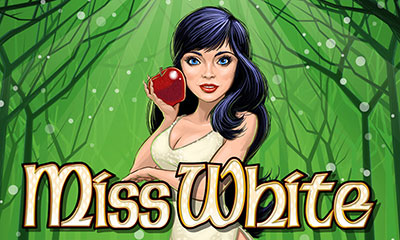 Play Miss White on any of these top casino sites;

Miss White is a 5-reel, 1024 ways to win slot offering an RTP that varies from 92% to 96.16%, for all players. IGT have added in a multiway xtra and the end2end expanding reels with this game, but we’ll explain that in a moment. Symbols are all derived from the original tale itself and included Miss White, Doc, the Prince, and the Huntsman as your higher paying symbols. With lower symbols represented by an owl, bird, caterpillar, axe, flowers and a gemstone. Now, unlike the first in the fairy tale ‘Miss’ games, the blend of music and sound effects in Miss White was really off putting. Of course, once we switched off it was much easier to play, which is a shame because in the first game of the series called Miss Red, we didn’t have to do this.

Bet Amounts – Betting begins at £45 per spin and can be increased to £450 per spin. We must reiterate that although the stakes seem quite high, there is a fantastic feature called multiway xtra in play here and we will go into it below for those that don’t understand what it means.

Multiway xtra feature – Many other slots have a certain structure to their pay lines and this is fine, but it can be limiting where wins are concerned. IGT has the interesting multiway xtra available and it means wins can be formed left to right, right to left and within the three central reels. This comes in handy when waiting on the expanding reels feature to kick in.

Wild Symbol – There isn’t an actual designated wild symbol within Miss White. However, land yourself a Miss White symbol between two Doc symbols or vice versa and they will merge to form a combo symbol. This then doubles up as a wild as it will turn all connecting symbols into the same and they will form a huge winning combination for you. 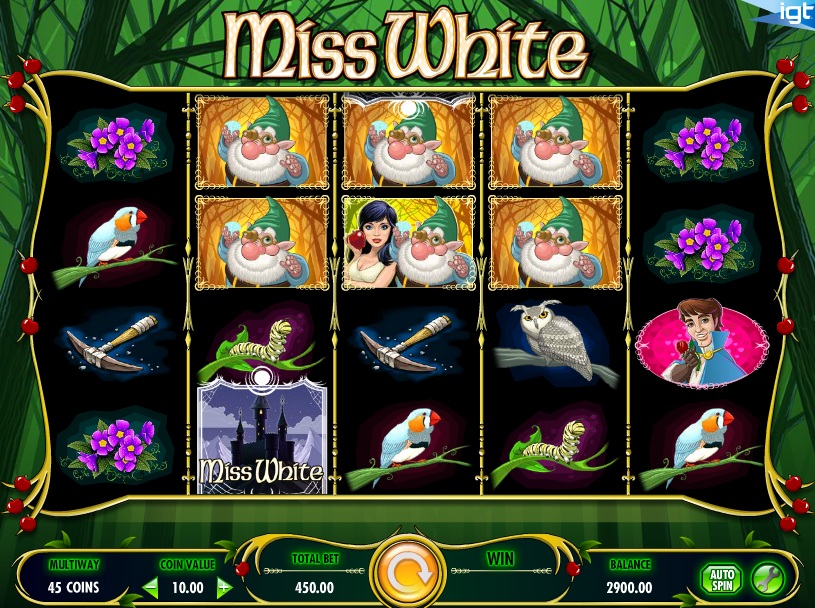 Scatter Symbols – Miss White’s castle is the scatter symbol and landing it on reels 2, 3 and 4 will trigger the bonus feature. It has no other value here, so you really need to land these to get any benefit from them.

End2End Expanding Symbols – You may have seen this before, especially if you have played the other game in this series from IGT. Just in case you haven’t, it is very simple. Land either the Miss White or Doc symbols on the same rows and they will expand to meet the symbol at the other side. As it expands to the other side, all the symbols it covers will turn into matching symbols and create a bigger win. Because of the unique set up of the win structure, this also means that you may end up with multiple rows of expanding symbols.

Bonus Spins Feature – Land yourself a castle scatter anywhere on reels 2, 3 and 4 to trigger this feature. On the next screen you will see the evil queen with her apples, you need to choose one of them to be allocated your spins. Each apple will have a number of spins from 5 to 15 behind them.  Once you have chosen your apple your spins will begin, but for every time you land x3 scatter symbols you get to pick another apple. Any spins you pick will be added to the current total for you to play through until the round is over. You can bag yourself up to a maximum of 280 bonus spins, which sounds perfect to us!

With Miss White we felt a little underwhelmed if we are totally honest. The first game of the series called Miss Red gave us a lot to think about and also some things we would have loved to have had changed. So, when we saw that IGT was making a second game we had high hopes, but they were unfortunately dashed as Miss White is essentially the exact same just in a different guise. Wins did come fast enough and for that we were happy, as it was good to have some winnings rack up. But overall, slightly disappointed as there was nothing new to report but still an ok timewaster as it was still a fun game.

Age of The Gods

February 23, 2018 Boku Slots Comments Off on Age of The Gods