Gambling and romance don’t usually go together, but in this instance they are really hitting it off. It’s time to head to a romantic hotspot named Venice and see what riches can be found. Developed by WMS Gaming, Hearts of Venice combines romance, gambling and a dash of intrigue, which we think is the perfect combination. 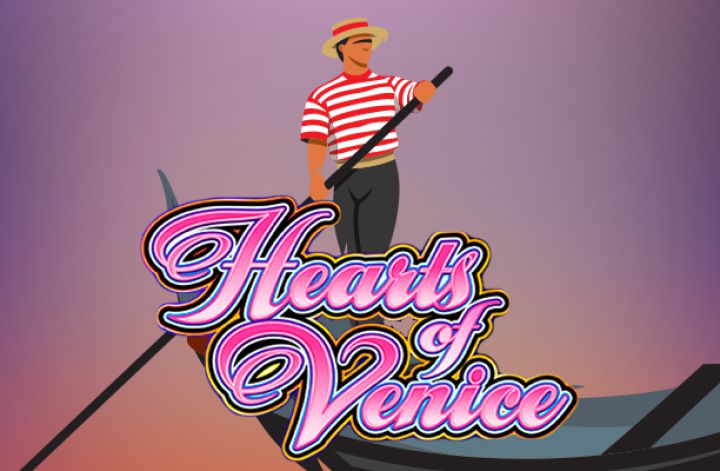 Play Hearts of Venice on any of these top casino sites;

Hearts of Venice is a 5-reel, 50 fixed pay line slot that offers players an RTP of 95.89%. Set against the backdrop of the Venice canals, it is filled with gondolas and couples enjoying a twilight canal trip together. Your reels float above this scene, with high value symbols including the woman, the gondolier guy, the gondola itself, the bridge, the lamp and the gargoyle. Lower value symbols are the gondoliers hat, the posts, the rope and the rose. We expected some kind of romantic sounding tune to be playing along to set the scene. But instead a sound played as the reels were spinning which stopped as they each land into position.

Bet Amounts – Betting on Hearts of Venice begins at 40p per spin and can be increased up to a whopping £500 per spin! To adjust your bet simply click the plus and minus symbols on the bet amount until you reach your desired number. As soon as you have you can hit spin to resume the game.

Wild Symbol – The Hearts of Venice logo is your wild symbol and it will substitute for all other symbols except the scatter. It will only appear on reels 2, 3, 4 and 5 in both the main game and the bonus games.

Bonus Symbol – There is a bonus symbol in Hearts of Venice, and it is a lovely big red heart shape. It is pivotal in triggering the hot hot respin feature which is explained below. But it also has its own little twist too. Every time a heart symbol lands on the reels, it will transform into another of the low or high value symbols in a bid to help form a winning combination.

Scatter Symbol – Your scatter symbol in Hearts of Venice is the silhouette of the couple encased in a golden frame. Landing three or more of these anywhere on the reels will trigger the bonus spins feature for you. 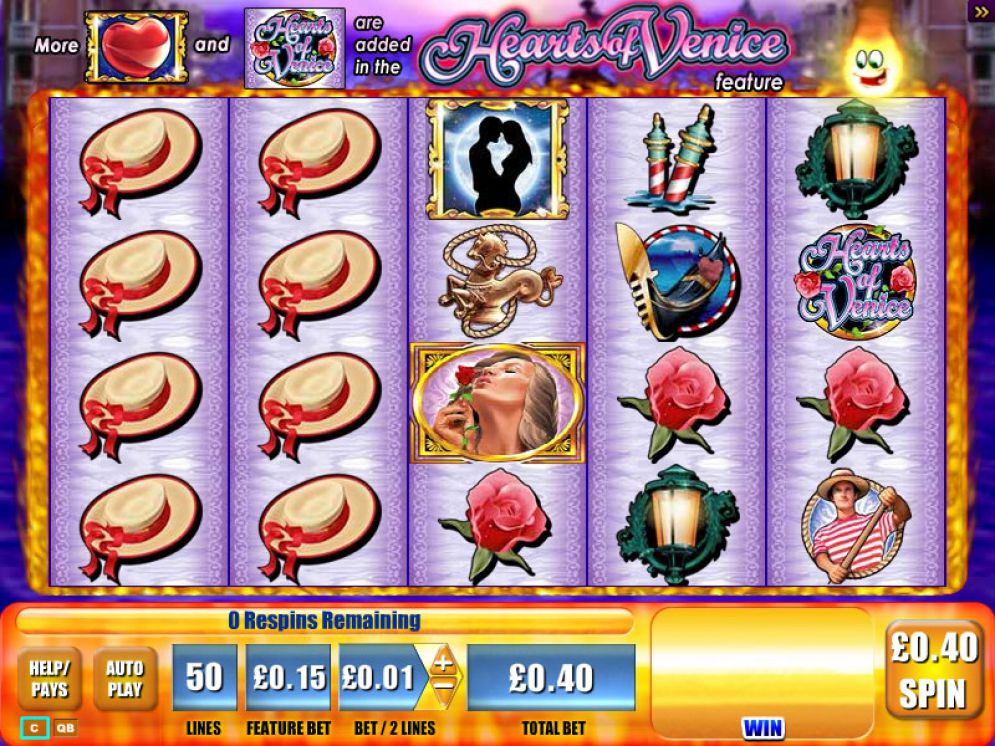 Hot Hot Respin Feature – If you land a heart symbol on every position of reel one, you will trigger the Hot Hot Respin Feature. You will be awarded with x2 respins of the reels, with reel one held in position. Also, any other heart symbols or wild symbols that are on any other reels, will also be held in position for the respins too. On respin one and two any further heart or wild symbols will also be held until the end of both respins. At this point all of the heart symbols will transform into matching symbols and hopefully combine with the wilds on the reels to create one big winning combination.

Bonus Spins Feature – Having landed three or more of the couple silhouette scatter symbol anywhere in view, you will enter the bonus spins feature. Here you will be awarded with x10 bonus spins to play through. During the round extra heart and wild symbols are added to the reels, giving you the chance of triggering the hot hot respin feature more easily. There is an additional scatter symbol in play too, which is a flaming background with the silhouette of the couple in front of it. This scatter will only land on reels 1, 2 and 3 in the bonus spins. If you land three or more of the flaming scatter symbol during the bonus round, you will be awarded with x10 more spins to your total. There is no limit to the number of times you can add extra spins to your total.

Hearts of Venice pretty much has it all, with plenty of love, romance and of course gambling. WMS Gaming did a pretty good job tying the features together, which means there is plenty of win potential in both the main and bonus features. The added extra of being able to retrigger the bonus spins is a great selling point, as not all slots offer this. It doesn’t always happen though, but when it does it certainly goes a long way to building up that win balance. Whilst the hot hot respins is an interesting addition there isn’t always a win attached to it, but that’s ok due to how often it actually triggers.