When space and fruit collide, it creates something either very impressive or very retro. In the case of Arcade Bomb, it is both and the developers behind it are non-other than Red Tiger Gaming. Set in what looks like an old console game version of space, we almost expected a space invader or two to turn up. Arcade Bomb is a bright and colourful game which includes an explosive feature that’s bound to please players. 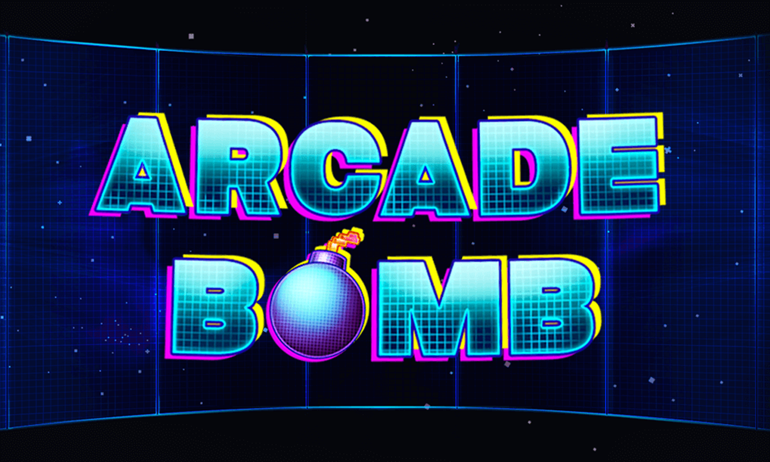 Play Arcade Bomb on any of these top casino sites;

Arcade Bomb is a 5-reel, 20 fixed pay line slot that offers an RTP of 96.15% and reels spinning transparently in a blue and white space themed sky. The design of the reels are almost retro, in as much as they look as if they belong on an 80’s games console with little spaceships and aliens. The symbols are a mix of fruits and old school slot symbols such as 7’s and bells. As the reels spin there is some pretty cool music playing along, as well as some beeps and blips that make it feel super retro.

Bet Amounts – Betting begins at 20p per spin and can be raised up to £100 which is the maximum. To amend your bet, you need to click on the bet amount shown in the lower left of the screen. When you click on the bet amount, a reel will expand which has all the available bets on it. Choose your bet from the reel and hit spin to resume play, simple as that.

Wild Symbol – There is no wild symbol in Arcade Bomb which can be off-putting to some. But trust us when we say that the wild symbol will not be missed in this game. Read on below about the bomb feature to find out why.

Scatter Symbols – Unfortunately there is also no scatter symbol in Arcade Bomb, this does mean no bonus spins too. But once again when you read about the reel bombs, you will see why this is also of no matter when it comes to the enjoyability of this game. 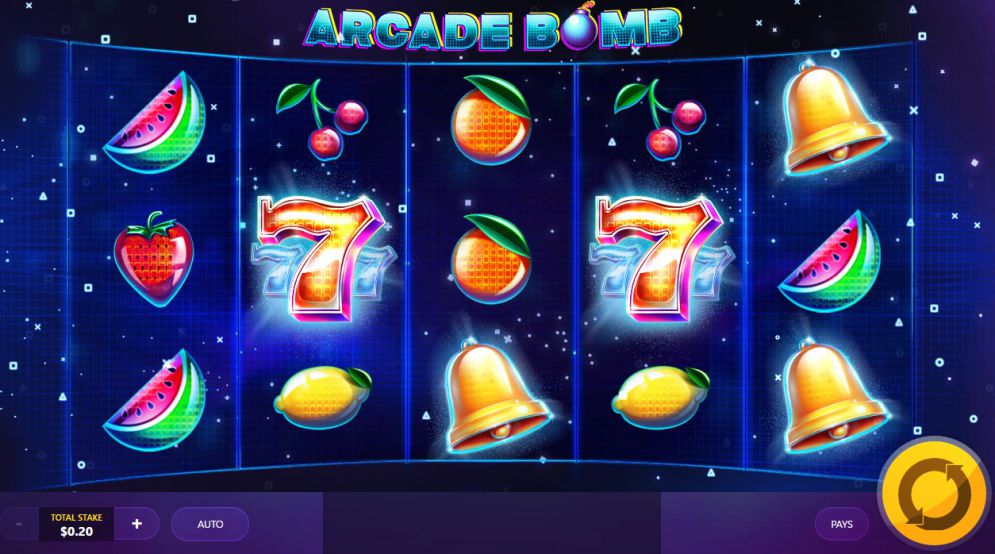 Other Symbols – Upon entering Arcade Bomb you are met with a plethora of colourful symbols. These include the triple 7, bell and bars as your higher paying symbols and the watermelon, strawberry, orange, lemon and cherries as the lower paying.

Reel Bombs Feature – There may be no wild and no scatter symbol present in Arcade Bomb, but that is because there is no need for them. The feature here is all about bombs and there are plenty to go around. There are x4 different coloured bombs in this game and they will appear at random on the reels. Sometimes more than one will appear on a single spin and at times you may well have multiple bombs across the reels. Each bomb explodes in a different pattern as it counts down, because of the timer that is on the front of it.

Each bomb when it lands has a number on it, the bomb remains on the reels and on each spin the number on the bomb counts down. When it gets to zero it will explode in its designated pattern as explained above.  However, as you can have more than one bomb active on the reels at the same time, this gives you the player a little extra twist. Once a bomb counts down and explodes, if another bomb lies in its path it too will be detonated resulting in a bigger winning combination. But the explosion is where it gets interesting for you. Each symbol in the path of the designated explosion pattern will be transformed into matching symbols. The symbol chosen will be the one that will award the best possible win on the reels, so this is done by taking into consideration those symbols already present.

Arcade Bomb is huge fun and really easy to play thanks to its one singular but enjoyable feature. At first when saw there was no wild or scatter symbol, we were dubious as to how the game would play out. How wrong we were to doubt the developing team of Red Tiger Gaming, as they have rarely let us down before. There are plenty of wins up for grabs here whether you play high or low, so the game is suitable for all bank balances.