We hand over the reins of this next slot to the delight that is known to all as the Bollywood Story. In more detail, it is NetEnt’s take on the love stories that come from Bollywood. With lots of colour, dancing and music included, get ready to be part of the greatest love story the online slot community has ever seen; then just hit spin and watch the magic unfold! 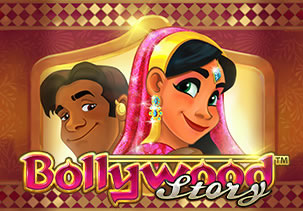 Play Bollywood Story on any of these top casino sites;

Bollywood Story is a 5-reel, 9 fixed pay line slot offering an impressive RTP of 96.10% for players. Set inside the arch of a grand home looking out onto the lush greenery beyond. The reels are packed with characters from the story and other brightly coloured symbols too. Higher values include the Bollywood Story logo, the female lead, male lead, and the mother and father in law characters too. Lower value symbols include the A, K, Q, J and 10 coloured to stand out with lovely patterns inlaid into them. Keeping in line with the theme, there is a distinctly Bollywood sounding track playing as the reels spin giving the whole game an upbeat feel.

Bet Amounts – Betting on Bollywood Story begins at 9p per spin and can be raised up to £90 per spin. In order to amend your bet, you need to increase or decrease the bet level and/or coin value. Once you have done this you will see the bet amount change and then you can continue your game.

Wild Symbol – Your wild symbol is the word wild surround by a frame of flowers. It will substitute for all other symbols except the scatter. It actually forms part of its own mini feature which you can read about below.

Scatter Symbol – A blue gemstone is your scatter symbol in Bollywood story. To trigger the bonus feature you need to land three or more of the scatter symbol anywhere in view. 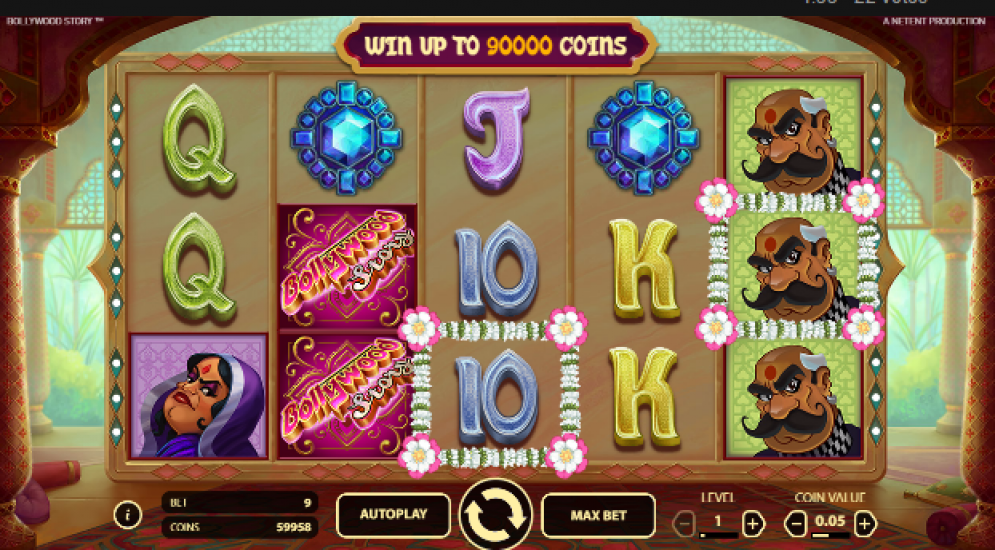 Floating Wild Feature – On every spin in both the main and bonus games you will receive something called floating wilds. This means they won’t land on the reels as a normal symbol would, it instead turns every symbol on the reels into a potential wild. As the reels land, the flower frame will float at random and settle into any of the positions on the reels. In the main game you will receive between 2 and 4 floating wild symbols, with this increasing in the bonus spins round. What does this mean for you, the player? On every single main game spin up to 4 symbols will be turned wild and complete any potential winning combinations. With that value increasing up to 6 wilds in the bonus game, this means bigger potential wins all round whether you make it into the bonus spins or not!

Bonus Spins Feature – In order to have triggered the bonus spins you need to land three or more of the blue scatter symbols anywhere in view. You will now be allocated with a number of spins as shown below;

There is no extra multiplier during the round, but you will get extra floating wilds instead. You will receive between 3 and 6 floating wild symbols in the bonus round, instead of the 2 to 4 you receive in the base game. Bonus spins can also be retriggered from within the bonus round too, with no limit on the number of times this can happen.

Bollywood Story brings the romance of the big screen to the small screen and despite it not having much going on feature wise, it still manages to entice people to return. We think in part this is due to the great bonus spins round, which could have been pretty uneventful if it wasn’t for those floating wilds. Main game wins seem to filter through slowly, but thanks to those floating wilds they do pick up the pace as the game progresses forward. This isn’t a game you will want to play for quick results as it is a slow burner. However, once you get into the bonus spins round the wait pays off, as there are much bigger wins to be found there! When all is said and done Bollywood Story is a nice take on a theme which has been done time and again.

September 14, 2018 Boku Slots Comments Off on Gladiator of Rome