“Slowly, gently night unfurls its splendour…” and here at Boku Slots we invite you to join us in the dark as we play Phantom of the Opera. Microgaming really have outdone themselves with this tip of the hat to an iconic novel and we are sure you will love it too. 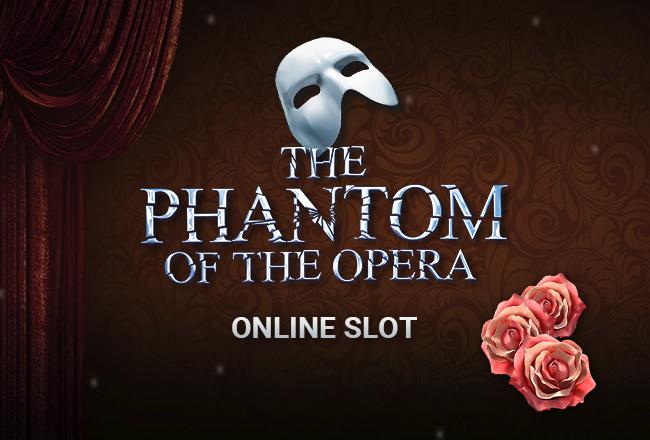 Play Phantom of the Opera on any of these top casino sites;

Phantom of the Opera is a 5-reel, 243 ways to win slot with a musical RTP of 96.40%. Themed on the 2004 movie, you will be treated to the musical score in the background; as well as random soundbites from the Phantom himself.

Bet Amounts – Betting begins on Phantom of the Opera at 30p per spin and can be adjusted in increments to the maximum, which is £15. This is one of the more affordable games that you can choose to play, when paired with the great RTP.

Wild Symbol – The wild is the Phantom of the Opera logo and it substitutes all other symbols, except the scatter and the letter bonus. Wilds can appear as double stacks in the main game offering more potential winning combinations. It is also the second highest paying symbol in the game, so land five wilds on a pay line and you will win 15x your bet amount; meaning a £15 bet becomes a £150 win.

Scatter Symbol – The scatter symbol is depicted by the Phantoms mask and landing three or more of these will trigger the bonus selection feature. It is also the highest paying symbol in the game offering a massive 100x your bet amount, meaning a £15 bet becomes a £1,500 win.

Chandelier Bonus Feature – This made us jump when it first happened, actually it makes us jump every time. Because, every so often a chandelier will be dropped onto the reels,      alongside a booming soundbite that you just aren’t expecting! When the chandelier drops it will turn up to 3 reels totally wild, enabling bigger winning combinations.

Letter Bonus Feature – Another great feature on Phantom of the Opera is the letter bonus. The letter symbol will only appear on reel 5 so watch out for it. When it lands it will open to reveal a prize of up to x20 the bet amount. It is a randomly triggered feature as with the chandelier. 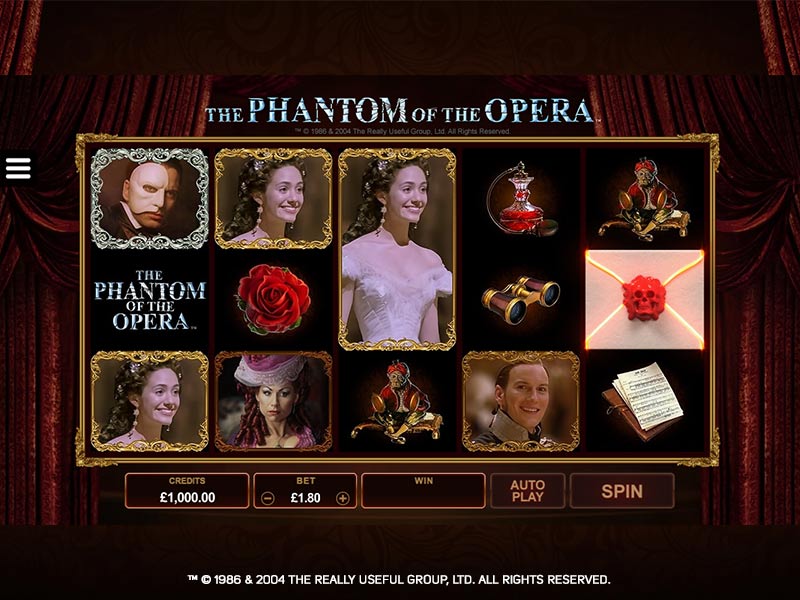 Bonus Selection Feature – So, by landing three or more scatter symbols you will have triggered this bonus feature. You will be given the choice of three bonus spin options. The details of which are outlined below:

Music of the night – You will be allocated 10 bonus spins and there is also the chance of a few extras too. During this option you may find that you also receive up to 3 wild reels, up to 5 extra spins, up to a x4 multiplier and up to 5 extra wild symbols.  Some or all of these may happen during this option making it very appealing.

Masquerade – In this option you are offered a choice of masks and you have three levels to climb. The prizes get bigger as you step up a level and you are allocated extra spins too.

All I ask of you – Here you are allocated 10 bonus spins and also you have the benefit of two dancing wild symbols in Christine and Raoul. As they land on the reels, they will move across the reels until they are together. Where they end up on the reels will determine the award that you receive:

Can you feel the power of the music of the night flowing through you, we certainly can after all of that! Microgaming have really taken their gaming to the next level with this one and we are in love with every fantastical piece of it. From the numerous features and bonuses, to the soundtrack and imagery. We maybe could have done without the booming soundbites giving us a shock every now and then, but it’s forgiven as it brought great rewards. This game is going to appeal to a lot of people and especially to those who are already a fan of the novel/musical. For now, though it is time to draw the curtains on the extravaganza that is Phantom of the Opera.