How does the Far East combined with a science fiction theme sound to you? To us it’s like heaven, we love anything that errs on the side of different and you can’t get much more different than Shogun of Time. Developed by Just for the Win, it is a game that combines both the modernised world with ancient symbolism. 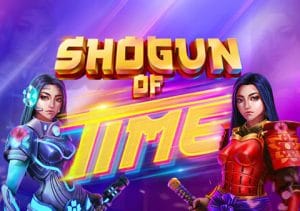 Play Shogun of Time on any of these top casino sites;

Shogun of Time is a 4-reel, 81 ways to win slot offering an RTP of 96.02%. Your reels encapsulate the theme perfectly, with symbols that float transparently inside what looks like a transport room from a spaceship. The city skyline is just outside of the window and the symbols are a mix of past and present. High value symbols are represented by the Shogun of Time logo, a samurai mask, armour, a fan and some lucky coins. Lower values are the usual card symbols, A, K, Q, J, 10 and 9 given an oriental design to them as well as neon colourings too. We would have liked a more oriental style music track playing whilst the reels spun. But the ones that are in play seem to link in well enough with both the game and the theme, it just isn’t quite what we expected.

Bet Amounts – Betting on Shogun of Time begins at 10p per spin and can be increased up to £100 per spin. If you wish to change your bet amount, click on the casino chip symbol above the spin button. You will see a sliding scale expands outwards and you can move this up or down until you find your desired bet.

Wild Symbol – There are two wild symbols in Shogun of time. The first is a single wild which is the female characters face and it appears in both the main game and the bonus. But the second wild will only appear in the bonus game and it is a stacked symbol too. It is the full character symbol stood inside a transporter tube. Both symbols will substitute for all others except the scatter.

Scatter Symbols – Your scatter symbol is a cluster of pink flowers. Landing three or four of these anywhere in view will trigger the bonus feature for you. 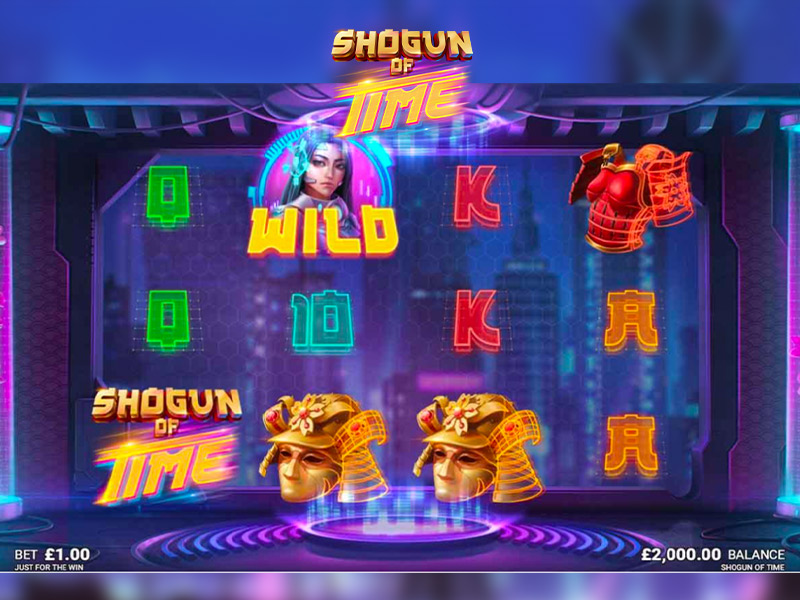 Reel Split Respin Feature – This feature offers players the chance to expand the reels from 4 to 5 and can only be triggered in the base game. It triggers after you land a four of a kind win of any kind. The reels will split, and a new reel will take up the centre position in between the other reels, making it reel 3. The other reels will lock in place and the centre reel will now spin on its own. You will be happy to hear that the addition of the extra reel increases the potential pay lines from 81 to 243! This extra reel is active for one single spin and because the other reels are locked in place it gives the chance of adding more matching symbols to the existing win combination.

Bonus Spins Feature – Land three or four flower scatter symbols anywhere on the reels to trigger the bonus spins. You will now be allocated a number of spins, which depends on how many scatters landed to trigger the feature:

During the bonus spins you will also have the stacked wild appearing. But, instead of landing them through spinning the reels, it is a more permanent fixture. In as much as it becomes the centre reel, like in the base game with the reel split feature. It will remain on reel 3 for the duration of the bonus spins, meaning some pretty big potential wins in the bonus spins feature!

Shogun of Time is a game that whilst seeming innovative and interesting, could actually lose its appeal after a while. Although the two features work well both alone and together, we expected something a little more interactive considering the theme. That being said, the reel split feature is something we don’t always see in a game and this definitely gave it an edge. It all boils down to the wins and this is where it might tip in your favour. Main game wins occur often, and it is relatively easy to trigger the reel split feature which can be profitable in many ways. Your bonus spins feature can trigger much quicker than you would think with only four reels in play. But once it does and you get that stacked wild on reel 3, you are in for a potentially great winning round. With the anime style design, fast game play and soothing music, Shogun of Time will be a game you either love or hate.