Ireland is a huge design draw for many slot developers, and rightly so. Leprechauns and four-leaf clovers all evoke the feeling of luck. Inspired Gaming are hoping to draw you in with their slot named Shamrock Lock. There isn’t much in the overall design, but they have packed three mighty features into the game instead. One being the Lock ‘n’ Roll which is an optional extra, so read on to find out more. 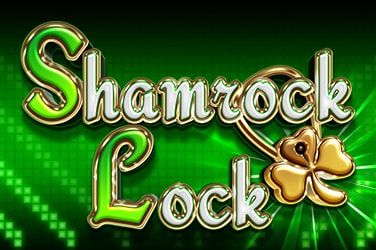 Play Shamrock Lock on any of these top casino sites;

Shamrock Lock is a 5-reel, 10 fixed pay line slot offering players a variable RTP of 95% to 96.5%. It is old school on design in as much as there is nothing in the background and its sole focus is on the symbols, and of course the pay lines. The one thing that did make it stand out was the pixelated light display running on the reels, which doesn’t really have any bearing on the game but made for interesting viewing. There is no music playing at all whilst the game is in play however there are some interesting sounds such as tinkling bells, meaning you aren’t playing in silence.

Bet Amounts – Betting on Shamrock Lock begins at 10p per spin and can be increased to a whopping £200 per spin. You will see the total bet amount showing in the middle of the lower part of your screen. Use the arrows to adjust your bet up and down until you are happy with the amount showing.

Wild Symbol – Your wild symbol is a golden shamrock with the letter ‘W’ on it. The wild will only land on the centre reel and will substitute for all other symbols in the game.

Scatter Symbols – Shamrock Lock has no scatter symbol in play here. Instead there is a respin feature triggered by the wild symbol.

Other Symbols – Symbols on Shamrock Lock range from the game’s logo and a pot of gold, to the lucky 7, which make up the higher paying in the range. With lower paying symbols being the horseshoe, leprechaun hat and mushrooms. 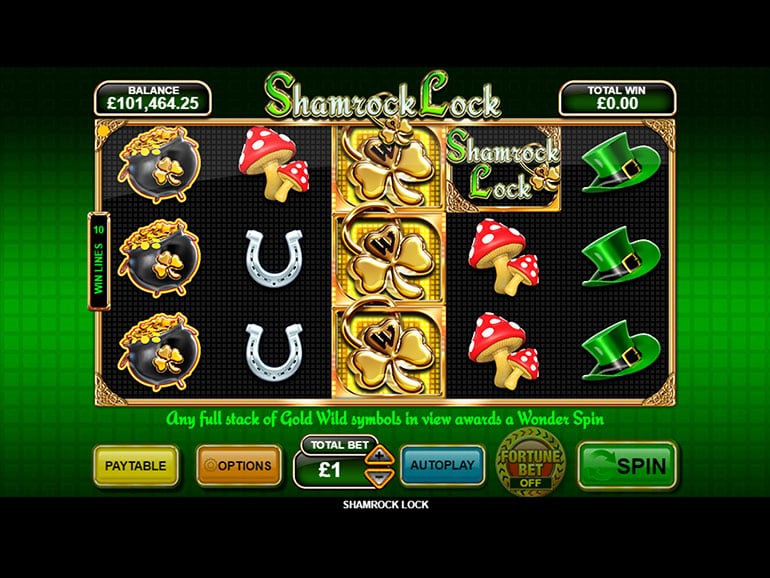 Wonder Spin Feature – Land a full stack of wild symbols on reel three to trigger this feature. You will be awarded a single respin of the reels with wild stacks added to reels 2 and 4. If you do not land a win on that respin you will be awarded a second respin, but this time the wild stacks will be on reels 1, 3 and 5. Either way you are not leaving this feature without a winning respin.

Mystery Box Feature – The mystery box feature will trigger at any point in the base game only and can happen on a winning or a losing spin! When it lands on the reels it will transform into any one of the game symbols to help form a win. It will not however, transform into a wild symbol.

Lock ‘n’ Roll Feature – Giving players the choice to pay an extra amount in order to gain extra features, is something a lot of slot developers add in. With Shamrock Lock you have this option called Lock ‘n’ Roll and it costs you 50% of your bet amount, on top of your current bet to activate.  Once you activate it you are not guaranteed that it will trigger on every spin, instead it triggers at random. So, you are taking a chance on hitting this additional extra. However, once you hit the Lock ‘n’ Roll button you will see that 1, 2, 3, 4 or all 5 reels will become locked together. Once the chosen reels are locked, symbols on those reels will transform into a chain of matching symbols. This could even mean that all the symbols on the locked reels transform in some cases. It is an interesting addition, but it can take a fair chunk out of your balance if used regularly.

Overall Shamrock Lock is a little underwhelming for us. We went into the game expecting a little more than we got. The general feel of the game is fine, and the wins happen fairly often within the main game, with the bonuses triggering often too. But for us the Lock ‘n’ Roll feature let it down, because it makes lots of great promises, but it doesn’t deliver. We feel that people may get too entangled in the possibilities of multiple locked reels and matching symbols.

If you take the game on face value and play it without the feature activated, it can be a nice slot option. It has great playability due to its easy-going design and lack of complicated features, which all go in its favour. Just be careful when using the Lock ‘n’ Roll as it will definitely chew up your balance and won’t always pay out the way you want it to.