Pixies are well known to be beautiful and sometimes mischievous creatures. But when taken in hand by the team at Pragmatic Play, we hope they are going to help you find riches within their kingdom. Wild Pixies is a quirky slot combining all the beauty of the fairy world, with some great features just for your enjoyment. Enter the magical realm and be wowed with bonus spins and roaming wilds.

Play Wild Pixies on any of these top casino sites;

Wild Pixies is a 5-reel, 20 fixed pay line slot offering a magical 96.5% RTP, for all who dare enter the woodland retreat of the pixies. The reels seem to be hovering amidst the forest above a river scene and are surrounded in green vines separating each reel from the next. Symbols are a mix of pixie characters and card symbols. Higher values represented by 2 male and 2 female pixie characters in blue, purple, green and a lighter blue shade. Lower values are represented by the A, K, Q, J, 10 and 9 symbols in a swirling script design and coloured up nice and brightly, to stand out against the character symbols. The whole time the game is in play there is a beautiful tune tinkling along, almost ethereal in essence and it certainly makes it easy to listen too.

Bet Amounts – Betting on Wild Pixies begins at 20p per spin and can be adjusted up to £100 per spin. In order to amend the bet amount, hit the symbol with the three lines on it found at the far left of the screen. It will expand a new screen into view, which is where you can amend your bet. Use the plus and minus symbols to change your bet amount until you are happy. Then hit the X to return back to the reels and begin spinning.

Wild Symbol – A gorgeous golden butterfly is your wild symbol in Wild Pixies. It will substitute for all other symbols within the game except for the blue gem scatter. The butterfly wild also plays a huge part in the bonus feature too awarding extra spins, so read on below to find out more. 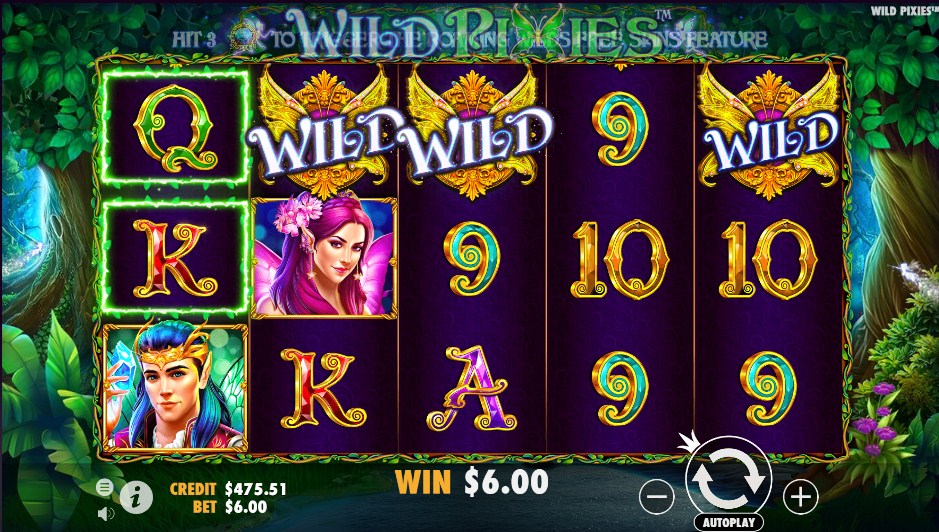 Scatter Nudge Feature – If you land a scatter on reels 1 and 3 but not reel 5 this feature can trigger. But only if a scatter symbol is in reach by nudging the reel up or down by one position. If this happens it will nudge the scatter symbol into view on reel 5 and thus trigger the bonus spins feature.

Bonus Spins Feature – By landing three scatter symbols on reels 1, 3 and 5, you will have triggered the bonus spins round. You will be allocated 8 bonus spins to play through with the roaming wild feature activated. At the top of the reels you will see 3 sets of butterfly shaped spaces and every time you land a butterfly wild on the reels, it will fill one of the spaces. When you fill one of the three sets you will be awarded 2 extra spins to your total. But, now those butterfly’s will return to the reels as roaming wilds for the duration of the spins. This means that on every spin the butterfly’s will flutter across the reels and settle in a new position. As you complete each set of butterfly spaces above the reels, a new set of roaming wilds will be added giving you a total of 6 roaming wilds by the time you finish all three sets.

Wild Pixies is a smooth, elegant slot combining stunning music and graphics with some very profitable features. Pragmatic Play have done a great job with this one and adding in those roaming wilds during the bonus spins was a genius idea. Especially as the initial spin allocation is generally lower than you would find elsewhere. That being said once those wilds trigger the win potential within the bonus grows exponentially. Couple that with the fast and furious main game wins and you are sure to be impressed with everything Wild Pixies has to offer.