Let Boku Slots take you back in time a little, to the era of muscle men and bearded ladies at the circus. Ladies and gentlemen roll up and see Chance Interactive Buster Hammer, which will amaze and astound you. 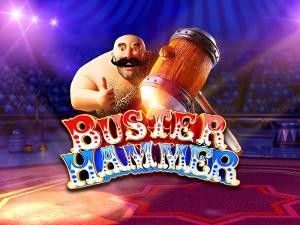 Play Buster Hammer on any of these top casino sites;

Buster Hammer is a 5-reel, 243 ways to win game, which offers a curtain raising 95.8% RTP for its players. The game is set against the backdrop of a big top circus and you have the central character Buster standing in the wings. The benefit of this pay set up (there being 243 ways to win), is that the combinations can be created starting from the left, as long as the symbols are adjacent to the one before.

Bet Amounts – Betting on Buster Hammer begins at just 25p per spin and can be increased to a maximum of £62.50 per spin. Making this one of the more pocket friendly games we have come across. Adjust your bet amount with the arrows to the left of the total bet screen, at the bottom of the main bar.

Wild Symbol – Busters hammer is the wild symbol. When it lands it will trigger the Buster feature at the side of the screen which awards up to a x5 win. The hammer wild substitutes for all other symbols except the scatter. 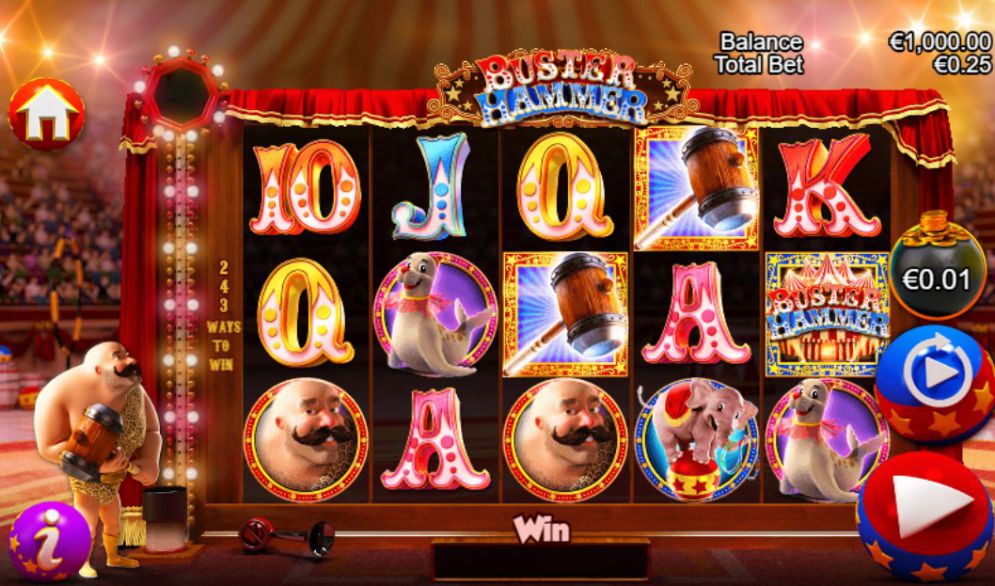 Scatter Symbol – The circus tent is your scatter symbol and landing three or more of these will trigger the bonus spins for you.

Bonus Spin Feature – Once you have triggered the bonus spins, you will be allocated a choice of spins and a matching multiplier too. Your bonus options are shown below:

Super Seal Feature – Nothing beats a random bonus and here at Buster Hammer you get just that. The cute circus seal will appear on screen and a ball with up to x5 your stake amount will land on his nose. It doesn’t stop there though, Buster will then raise his hammer and strike the anvil at least once, but sometimes more. Each multiplier that is awarded from his strikes will be added up. Once finished it will be placed on top of the initial bet multiplier won at the beginning of the feature. The hammer part of the feature can award up to x75 the amount you first won when the seal hit the screen, giving a potential win of up to x80 your stake amount.

Unlike most circus games Buster Hammer really did deliver, the graphics and animations were well designed and implemented. There was a lot going on, so the game didn’t bore easily and the wins triggered fast and often. We loved the idea of being able to choose your own bonus spin game too. Giving the option to decide between more spins or a higher multiplier, gives you a sense of control in some way.