When we at Boku Slots reviewed the popular Jack Hammer slots from NetEnt, we were incredibly impressed with what we saw. So upon seeing that there was a Jack Hammer 2 : Fishy Business we had to wonder if it would be equally good, if not better. Or would it end up being a disaster like many of the sequel movies we’ve seen. It still maintains the comic book appearance with big city imagery, but this time there’s a new enemy called Don Crabby. 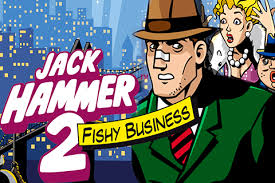 Play Jack Hammer 2 on any of these top casino sites;

Jack Hammer 2 is a 5-reel, 99 fixed pay line game with an RTP of 97.1%, which is higher than the original Jack Hammer. The game brings back the fantastically rewarding sticky wins feature, as well as the bonus spins and even adds in an extra twist. You will of course recognise the famous comic book graphics and animations, however you are treated to an amusing introduction video as well. This will show you in true comic book hero style, just what has been going on in the latest instalment of Jack Hammer 2.

Bet Amounts – Betting amounts on Jack Hammer 2 begin at just 50p and can be increased up to £250, with a lot of choice in between on betting values. To change your bet simply adjust the coin level or coin value to suit your current betting needs and then hit spin. But make sure you are happy with the amount you are betting before doing so.

Wild Symbol – Your wild is still depicted by the word WILD in front of a colourful explosion, with gears flying away in this game. It will substitute for all symbols except the scatter in the main game. You also receive some random wilds too, but these only appear in the bonus spins feature. Your random wilds are shown by Jack Hammers fist and Don Crabbys fist. They will substitute for all other symbols except the scatter and the regular wild. 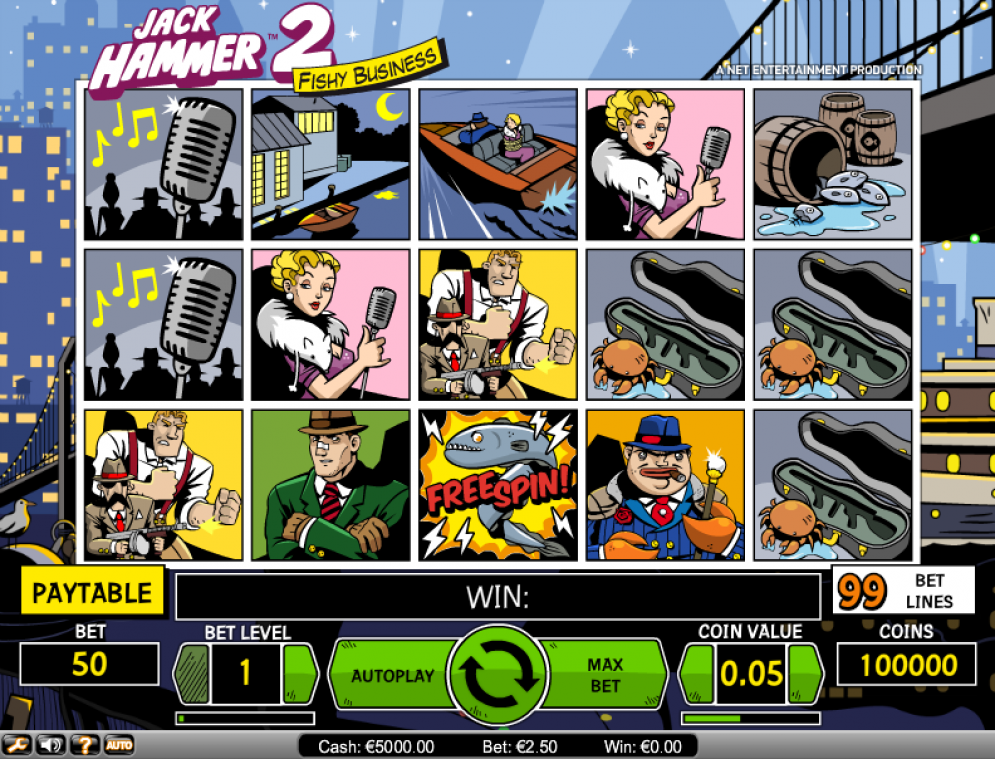 Scatter Symbols – The scatter symbol is an electric eel image and landing 3 or more of these will trigger the bonus spin feature for you. By landing 3 of the scatters you also activate the sticky wins feature, which can potentially lead to bigger bonus spin wins too.

Sticky Wins Feature – Again you have the sticky wins in play here at Jack Hammer 2. It is very simple in design, all you have to do is land a winning combination and those symbols become sticky whilst the rest of the reels respin. If additional matching symbols appear they too become sticky and the reels spin again. The respins will end once no new matching symbols appear. At this point your win is accumulated and added to your balance.

Bonus Spins Feature – Having landed 5 or more scatter symbols, you will be allocated a set of bonus spins to play through. All wins in the bonus spins feature are doubled and a random wild will appear on each spin, helping to create more winning combinations.  The bonus spins are allocated as shown below:

There are some marked differences between Jack Hammer 2 and the original. The first being a huge change in the amount of bonus spins awarded and the second being that the wins are doubled, not tripled. That being said it is easy to overlook, as the features and wins are triggered often enough to make players very happy. Whether comic books are your thing or not, this game will win you over as it has done with the team at Boku Slots.