Sumo wrestling is a Japanese sport that is both awkward and yet amazing to watch. There’s the whole men in diapers thing of course, but the strength they have is incredible. Red Tiger Gaming have taken the sport and developed a whole slot around it called Sumo Spins. Keep watch for those sumo characters appearing, as there is more to them in this game than meets the eye! 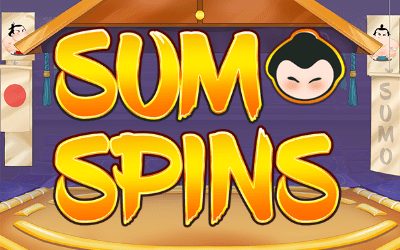 Play Sumo Spins on any of these top casino sites;

Sumo Spins is a 5-reel, 40 fixed pay line slot that offers anyone brave enough to enter the ring an RTP of 96.13%. At the beginning of the game you see a fun little video of the wrestlers competing, this then merges into your reels which are formed on the sumo mat seen in the video. Symbols are a bit of an odd mix of the four standard card suits and various Japanese items. In the background there is a tune playing which is a mix of oriental and cartoon style sounds. We found after a while it became a bit irritating, so we did mute the sound, but it doesn’t affect game play too much if left on.

Bet Amounts – Betting on Sumo Spins begins at 20p per spin and can be adjusted up to the maximum of £100 per spin. In order to change your bet, click the bet amount which will expand a screen upwards. There will be a variety of bet amounts on the screen to choose from. Simply pick the bet you wish to play with and then hit spin to return to the game and continue playing.

Wild Symbol – Unfortunately there isn’t a wild symbol in play in Sumo Spins! However, you should not let this worry you, because Red Tiger Gaming has something up their sleeve. Instead of a wild symbol there are three bonus symbols to help trigger features and create winning combinations.

Other Symbols – Within Sumo Spins you have a mix of Japanese items and the icons from playing cards making up your game symbols. Higher paying values are the packet of money, bowl of food, bucket of water, banner and what looks like a rice bowl. Lower paying values are the club, heart, diamond and spade which are coloured in green, red, blue and yellow.

When you enter the round the sumo symbols will be overlaid on top of the reels as they are spinning. They will fight each other, pushing until one of the symbols is removed from the screen. The reels will then stop spinning and the remaining sumo symbol will take up a 2×2 space on the reels. If the winning sumo is the one you chose to be your wild, then he will act as a wild helping to contribute to any potential wins. But if the winning sumo is the symbol not chosen as a wild, he will not be a contributor to any wins despite taking up the 2×2 space on the reels.

Sumo Spins is actually quite a refreshing change when it comes to the online slot arena. With no wild symbol in place you would think this would negatively impact the game. But thanks to the innovative addition of the bonus symbols and their individual base game features, the wild is not missed. We loved the quirky sumo fights during the bonus spins round. Giving players a little something extra during gameplay than just watching the reels spin. Hoping your chosen wild wins the round giving you a 2×2 wild symbol on each spin! We found Sumo Spins to very enjoyable and extremely easy to understand and play through. Couple that with the regular occurrence of base game wins and the extremely fun bonus round and this is definitely a winner for us.

May 9, 2018 Boku Slots Comments Off on Bikini Party