The doctor will see you now, but don’t be shocked when you see him. He isn’t the usual doctor type you may visit. Inspired Gaming have created a fun new slot based loosely around a voodoo doctor with the interesting twist of making him a crocodile. When you play Spin Doctor you will be given a course of treatment that includes some nifty features, reel modifiers and the fortune bet options. So, if you are brave enough to enter the swamp of the Spin Doctor, then you deserve any riches you may find in there! 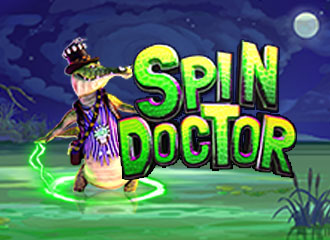 Play Spin Doctor on any of these top casino sites;

Spin Doctor is a 5-reel, 20 fixed pay line slot offering players a nice even 95% RTP. The reels are set inside a dark swamp scene with houses built on rickety piers and the Spin Doctor appears from time to time as well. Symbols are a nice mix of card suits and voodoo style items that wouldn’t normally mix but seem to work somehow. Higher paying symbols include the Spin Doctor logo, a voodoo hat, a skull, a spell book, a magic potion and a birds skull. Lower values include the K, Q and J symbols found in playing cards and designed to look as if carved from some sort of blue stone. To add a little something extra to the game you will hear an almost eerie tune playing as the reels spin. We found this to be of great fun and left it on while we played, it added to the atmosphere that’s for sure.

Bet Amounts – Betting on Spin Doctor begins at 20p per spin and can be increased up to £200 per spin at its highest. To change the bet, click on the bet amount section which says ‘change stake’ off to the bottom left of the screen. Select your bet amount and upon choosing you will be immediately returned to the reels to continue playing.

Wild Symbol – Your wild symbol in Spin Doctor is a bright pink neon sign that spells out the word ‘wild’. It will substitute for all other symbols in the game except the bonus.

Bonus Symbol – The Spin Doctor himself is your bonus symbol and he will only land on reels 1, 3 and 5. Landing three or more of the bonus symbols on those reels will trigger the feature. He also increases in size when you activate the fortune bet option which is outlined for you below.

Fortune Bet Option – Below the reels you will see a button that says Fortune Bet on it. It also has a switch that will be set to the off position when you first enter the game. If you decide to switch on this option your stake is increased by 50%! So, if you are currently betting at £100 your bet will increase to £150 for every spin you make with this activated. In return your bonus symbol is increased in size to 2 symbol positions. This will increase your chances of landing the bonus feature on every spin.

Swamp Bonus Feature – Having landed three or more of the bonus symbol on reels 1, 3 or 5 through normal play or the fortune bet, you will enter the feature. You will now be taken to a screen filled with bubbles and different bonus games listed down the side of the screen. You need to pop the bubbles to reveal a coloured bonus symbol which matches the different games to the side.

Find three matching bonus symbols to trigger the game it relates too, with each bubble marking an x below its matching game. 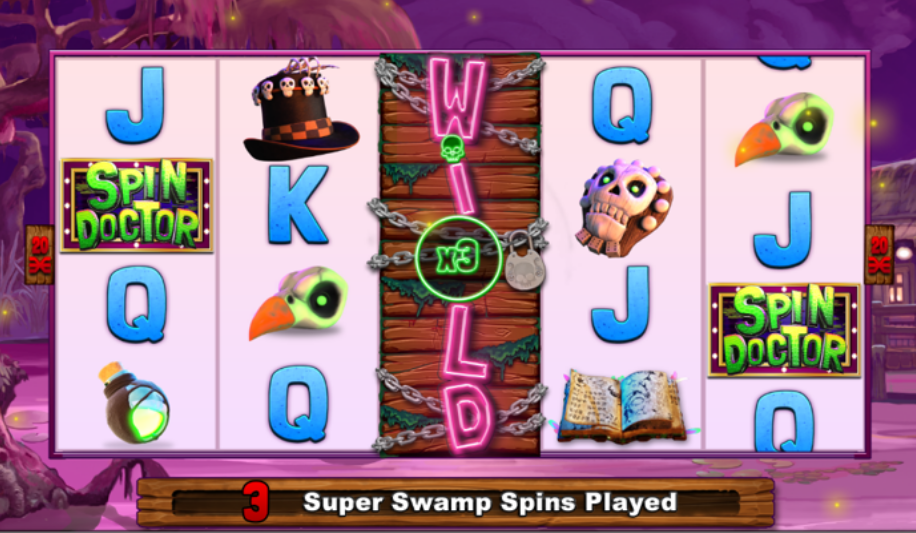 Reel Modifier Features – Every so often you will see a crocodile doctor turn up to the left of the reels. He will cast a spell on to the reels awarding one of the following two features:

Sometimes Spin Doctor will cast a spell and it will backfire and no feature will be awarded. Although throughout our time playing we found this happened once in a while. With the reel modifiers triggering in most instances.

Spin Doctor has a lot of things going on within the game that would to most people seem appealing. Overall they would be right, the game is very enjoyable, easy to play and can prove quite profitable once the bonus feature hits. In the meantime, base game wins are low and hard to trigger! That is unless you have been playing for a while, then things seem to pick up the pace. But if you are only playing in short bursts the lack of main game wins is something you should consider. The bonus feature doesn’t trigger as fast as you would hope in the base game either. Meaning not only are you waiting around for main game wins, but that bonus is elusive too. Thankfully the reel modifiers are there to save the day. Triggering more often than the feature, this is the games saving grace. Inspired Gaming made the right choice with adding these reel modifiers, as we would have lost interest pretty quick otherwise.

Book of the Irish

August 4, 2019 Boku Slots Comments Off on Book of the Irish