If retro style slots with a modern twist are your thing, then you are going to fall head over heels for this next slot. Red Tiger Gaming have combined old with new with their Mystery Reels Megaways slot and we think you will love it. Not only do you have the megaways feature, but they have opted to add in the cascading symbols too. Add this to the usual run of extras and bonuses, and you have got a winning combination in your hand. 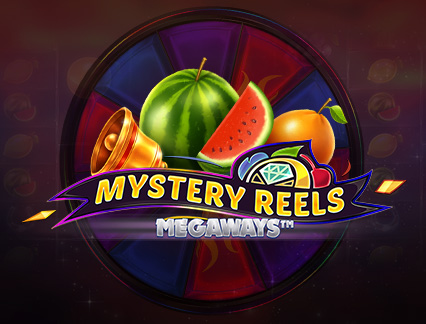 Play Mystery Reels Megaways on any of these top casino sites;

Mystery Reels Megaways is a 5-reel slot offering up to 117649 ways to win and an RTP of 96.18%. The game screen itself is set out to look like an actual slot machine screen you would find on a casino floor. It is encased in a silver surround and filled with old school symbols like bells, horseshoes and fruits. Higher value symbols include the 7’s, stars, bells and horseshoe, with lower values being the watermelon, grapes, blueberry, peach, lemon and cherries. As the game plays through there’s an almost electric sounding tune playing along, with a metallic tapping noise as the symbols land in position. You will also see how many ways to win are in play with each round, as it updates with every reel landing. This is a fab way to keep track but can also be a little off-putting if your wins aren’t landing and you can see how many potential win lines were in play for that spin.

Bet Amounts – Betting begins at 20p per spin and can be increased up to just £10 per spin. Considering the amount of ways to win and the RTP, we feel this makes Mystery Reels Megaways one of the more affordable games in this arena. To change your bet, click on the stake button at the bottom left of the reels. Choose from the list of bet options that expand upwards and when you click on your chosen bet you will be returned to the game.

Wild Symbol – Mystery Reels Megaways has no wild symbol, but don’t let that deter you from giving the game a chance. It still has a bonus spins feature and an extra something to make up for the lack of the wild.

Scatter Symbol – Your scatter symbol on Mystery Reels Megaways is a wheel of fortune style icon that will land anywhere on the reels. You will need to land three or more of the wheel scatter in order to trigger the bonus spins.

Megaways / Cascade Feature – Megaways wins means that symbols will land on the reels in either 1, 2 or 3 symbols spaces high. Meaning potential combinations from one reel increase and decrease depending on the symbol in place. Cascading symbols is a great feature as it gives you higher win potential from every paid spin. Whenever you form a win those symbols included are removed from the reels and new ones fall into place. If a new match occurs the cascade process is repeated again, this will continue until no new matches are made by the symbols that have fallen into position. 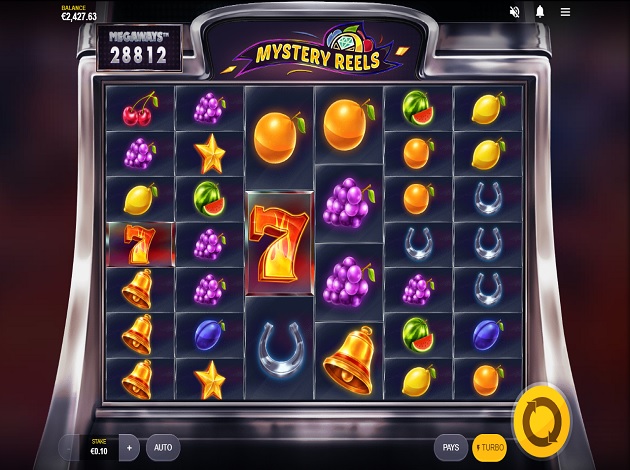 Clone Feature – This is a cool addition and more than makes up for the lack of a wild symbol. Maybe because it functions in a similar way to a wild. The clone symbol is a gold apple with a question mark in the middle. When it lands it will move across the reels at random landing on other symbols and transforming them into matching symbols, creating bigger wins. You can land more than one clone symbol at a time on every spin. Each one will determine at random how many symbols it will transform, but it will always be a minimum of x2 changed per clone symbol.

Bonus Spins Feature – Having landed three or more of the wheel of fortune style scatter symbol on the reels, you will enter the bonus spins. You will be allocated with 8 spins initially, but you are then given the chance to gamble them for a higher number. If you choose to gamble, then you will spin the wheel of fortune which has been split into sections holding a variety of spin amounts. Be careful though as you may land on the 4 spins section and lose 4 of your initial spins. But, there are also 12 and 20 spins up for grabs on the wheel, increasing you initial spins by 4 or 12. Think carefully before choosing to spin the wheel, as you will see when playing that the 4 spin sections far outnumber the higher spin amounts. Once you enter the spins however, you are awarded a win multiplier which increases with each spin in the round.

Mystery Reels Megaways is quite a fun and engaging game, however there is just one minor point that ruins the fun. Despite having low bet options, a great RTP and even plenty of main game wins, that bonus spins feature just does not want to drop! In the duration of our game play it landed just once and that was after some pretty consecutive and higher stake spinning. We started low and built it up until we were at the £10 max bet option, but still no bonus spins for a long time! So, if bonus spins are something you enter a game hoping to trigger, then this may not be the best game for you. Other than that particular issue Mystery Reels Megaways on the whole is pretty good, with main game wins coming fast and often thanks to the cascade and clone features. This in itself goes a long way to make up for the time spent waiting for that bonus spins feature to land.