The Greek gods provide a wealth of inspiration for many writers, movie makers and yes even online slot developers. Rising Entertainment have taken this particular theme and developed a very interesting slot named God of the Sea. Based loosely around the god named Poseidon who ruled the sea with his gold trident! There is a lot going on in this game include some main game extras and a great bonus spins feature too; all it needs now is you. 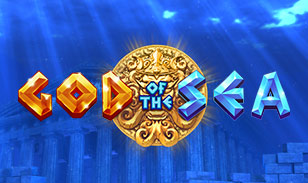 Play God of the Sea on any of these top casino sites;

God of the Sea is a 5-reel, 30 fixed pay line slot that offers anyone brave enough to take Poseidon on, an RTP of 96%. Set inside the ruins of a Greek temple way below sea level, where Poseidon rules, your reels are carved in stone and surrounded by the ocean. Symbols include Poseidon and the usual card symbols are here too but given a Greek twist. Higher value symbols are depicted by Poseidon, a warrior, a goddess, a lute and a jug. Lower value symbols are depicted by the A, K, Q, J, 10 and 9 but all have been carved from stone and drawn in Greek style font. You will hear an interesting tune playing as you spin, but it doesn’t quite sit right with the theme and got a tad annoying. Our advice for more enjoyable game play, switch off the sound, you can thank us later.

Bet Amounts – Betting God of the Sea begins at 30p per spin and can be increased up to the maximum of £30 per spin. Amend your bet by using the plus and minus symbols on either side of the spin button until you are happy with your total bet showing.

Wild Symbol – A blue temple with the world wild emblazoned across it in gold lettering is your wild symbol on God of the Sea. It will land anywhere on the reels and will substitute for all other symbols except the scatter.

Scatter Symbol – The scatter symbol in God of the Sea is a golden mask. It can land anywhere in view and landing three or more of them will trigger the bonus spins feature.

Random Features – During the main game you may find you are in the gods favour. If so, you will receive their blessings in the form of one of the following mini features.

Bonus Spins Feature – To trigger the bonus spins you will have needed to land three or more scatter symbols on the reels. This can be done via normal game play or from the two mini features explained above, the sea spins or Poseidon’s hand.

Depending upon the number of scatters present when you trigger the feature, you will be awarded a set of spins to play through.

Once your spins have been awarded you will now need to pick one of two options presented by Poseidon. After you choose your option your game mode will be revealed:

You can retrigger the bonus spins round from within either of the two game modes. All you need is to land more scatter symbols. Once you have finished your current round you will be given the option of choosing your game mode again. There is no limit to the number of times the bonus round can be retriggered.

God of the Sea is a great game overall, fast wins happening within the main game and the bonus spins triggered fairly often. We did find that more often than not we ended up choosing the silver spins mode, but on occasion we hit the jackpot and picked the gold spins. That being said the potential for high profits are there regardless of which mode is chosen. Due in part to the extra symbols added in both modes and of course there is the retriggering ability to consider too. The graphics are well drawn and bright, and literally the only downside to the whole game was the sound which was easily rectified. If you like Greek god themed games, then God of the Sea is something you really should try.