Back to Vikingdom as we head for the third instalment of the Vikings trilogy hailing from Yggdrasil Gaming. This time round our Vikings are battling the gods of the underworld and they need your help. Let us enter the depths and join the battle as the Vikings Go to Hell! 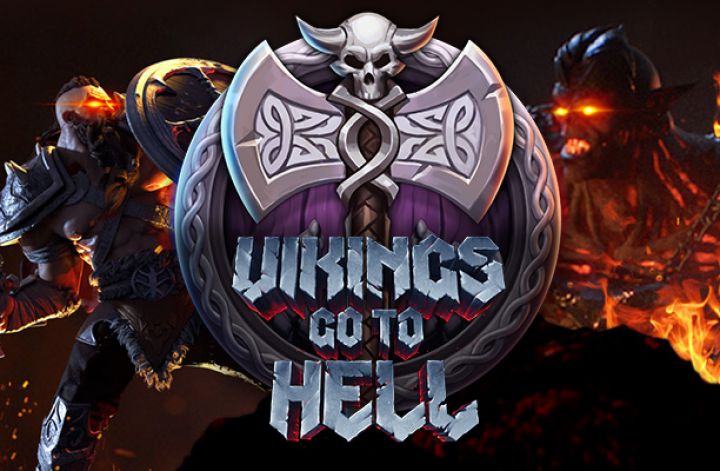 Play Vikings Go to Hell on any of these top casino sites;

Vikings Go to Hell is a 5-reel, 25 fixed pay line slot that offers all you wannabe Vikings a very god pleasing 96.30% RTP. Alike the others in the series, there is atmospheric background music sounding all ominous and foreboding. Noticeably different though is the graphics and design gone into Vikings Go to Hell, the characters have all been overhauled and updated. There is a rather interesting fight scene video clip at the beginning of the game as well which was a welcome addition. Symbols again are formed with the four main characters being the higher values and the four coloured shields this time making up the lower symbols.

Bet Amounts – Betting on Vikings Go to Hell begins at 10p per spin in this final instalment of the Vikings games, which is relatively low considering you are getting 25 pay lines for that price! Spins can be increased up to the maximum of £125 per spin and you can adjust those bets by using the coin value slider to the left of the spin button.

Wild Symbol – There are two wilds of mention in Vikings Go to Hell. Both are shown the same way, a gold emblazoned square with the word Wild in the centre. One is a normal wild and the other is a sticky wild. The sticky wild has a little more decoration on its symbol than the normal, so you can differentiate between the two. Both wilds will substitute for all other symbols except the scatter.

Scatter Symbol – A fiery demon holds the key to your bonus round in Vikings Go to Hell and is your scatter symbol. Landing three or more of these on the reels will trigger the bonus spins and bring a few extras along with it too.

Treasure Chest Feature – As in previous versions within Vikings Go to Hell there is a treasure chest feature too. Land yourself a treasure chest on any space of reel 5 to activate the feature. On landing the treasure chest it will spin and reveal a tablet that says either ‘good’ or ‘epic’. Depending on what it reveals will decide what award you are given from the following: 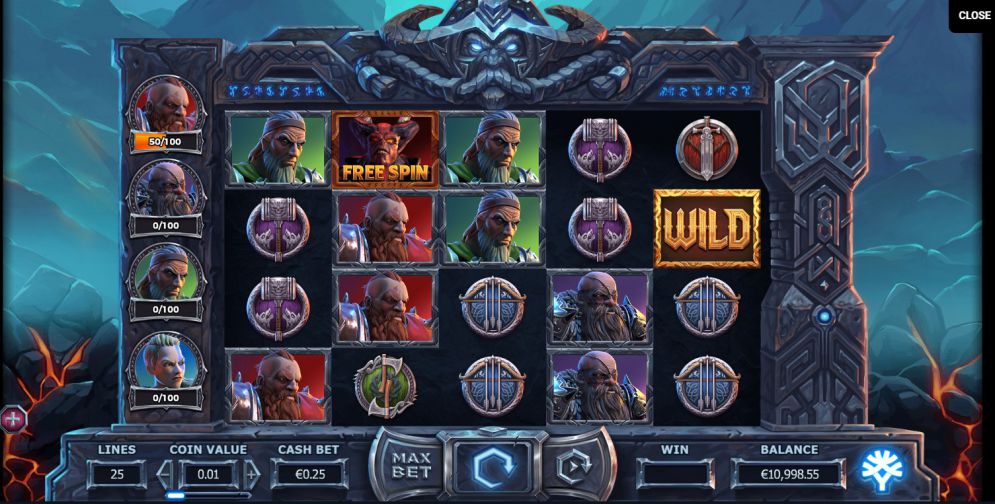 Bonus Spins Feature – Landing three or more of the demon scatter symbol will trigger the bonus spins round for you.

In each spin if a Viking lands it will battle a demon, if it wins the symbol it will then become a sticky wild for the remaining spins. As well as becoming a sticky wild it will also add 1 point to that particular Vikings rage meter, which will be explained below.

After you defeat the Lord of Chains in level 1 you will be taken to level 2 and awarded 7 extra spins. Here you will be fighting the King of the underworld himself, Lucifer!  Same rules apply, you will battle him after each spin that has landed a Viking on it, and three strikes to Lucifer will defeat him. During the battle the Viking will become a sticky wild and any successful strikes will add a random sticky wild to the reels. However, defeat Lucifer and any Vikings that land on the remaining spins will instantly turn into sticky wilds.

Rage Feature – You will have seen the rage meter in previous versions if you have played them. If not, then read on for this is a very interesting feature in the game. Each Viking has a meter under their character at the left of the reels.

To earn rage points Vikings need to fight demons and to do this you have to land just x2 scatter symbols on the reels. Do this and the Vikings on the reels at the time will fight. If they win a point is added to their respective meters and that symbol will then become a sticky wild for one bonus respin of the reels.

Once a Vikings rage meter is full they will enter what is called berzerk mode, you will be allocated 7 bonus spins and the Viking will win every fight had with a demon during these spins. This means the rage meter could well fill up very fast again. It also means the addition of plenty of sticky wilds too, which should in turn help to complete more potential winning combinations for you too.

Ok, we know there was a lot to take in. With each version of the Vikings games, Yggdrasil Gaming decided to add a little more into the game each time. It does appear quite complex and we hope we haven’t confused you all too much in our explanation. Once you get playing the game itself everything will become a little clearer, we promise. Vikings Go to Hell is the penultimate game of the three and by far our favourite. Viking warriors battling the underworld and Lucifer himself is just an awesome thing to watch play out, we almost wish it was a movie. Wins happen often enough, and the bonus spins can be retriggered again and again. If you were to play any of the three games, we would highly recommend this one, it has fast become our favourite.

December 22, 2018 Boku Slots Comments Off on The Curious Cabinet