When it comes to forgotten lands, or lost realms you usually always think of Atlantis or something to do with the Aztecs. Well, that is because not many people know of the Forgotten Land of Lemuria, but luckily for you Microgaming know all about it and want to share it with you. Now, Lemuria is a lovely island that is rumoured to exist somewhere within the Pacific or Indian Ocean, or is it both, no one really knows. Maybe when you get back you can clear that up for us, have a great time exploring and hopefully winning. 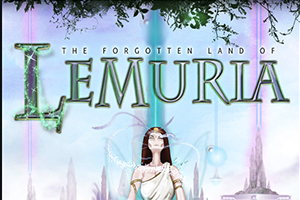 Play Forgotten Land of Lemuria on any of these top casino sites;

Forgotten Land of Lemuria is a 5-reel, all pays slot and offers a tempting 96% RTP for all those who dare to travel. In the background you will see floating palaces, waterfalls and a generally ethereal setting. Not so much with the sounds though, with pretty annoying noises which meant we had to switch them off to enjoy the game. Higher value symbols are shown by a glowing crystal skull, a white flower, and a green crystal rock formation. Lower symbols are shown by the A, K, Q, J, 10 and 9 card denominations.

Bet Amounts – Betting on Forgotten Land of Lemuria begins at 25p per spin and can be adjusted up to the maximum of £250 per spin. Meaning there is lots of scope for affordability within this game. Be sure you have a suitable balance in place to play through at the higher stake amounts. Adjust your stake by amending either the coin value or the coin amount before hitting spin.

Wild Symbol – Your wild symbol is the Forgotten Land of Lemuria logo and it will substitute for all other symbols except the scatter.

Scatter Symbol – Forgotten Land of Lemuria has an eye for your scatter symbol. It makes one wonder to whom it belongs, very curious indeed. Land yourself 3 or more of these symbols to trigger the Vault Treasure bonus feature. 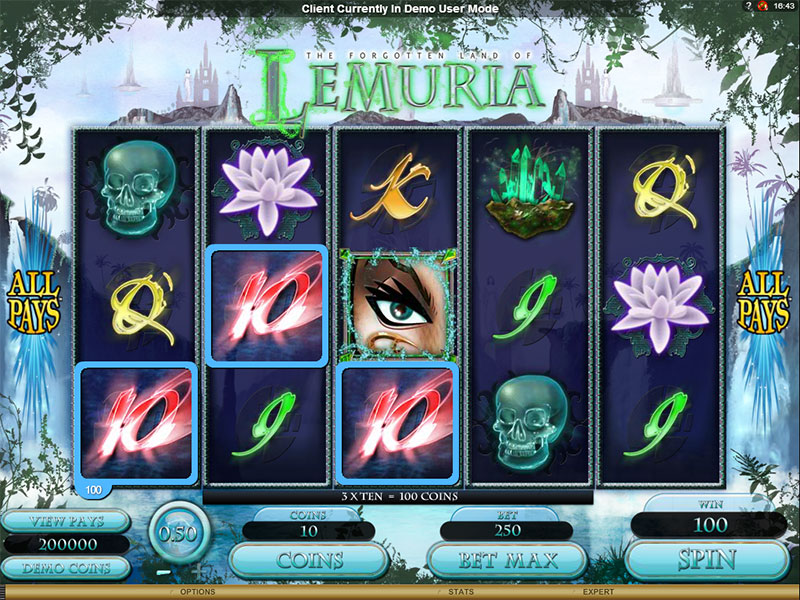 All Pays Feature – This is an interesting addition and one that Microgaming has included in a few games. Pays are simple really, if you have a matching set of symbols running from left to right on adjacent reels, then it will pay out. Doing away with the old fashioned pay line structure certainly adds an extra layer of excitement to the game.

Treasure Vault Feature – Getting back to the game at hand and the all-important bonus feature, we know that’s really what you want to know about after all. Landing three or more of the eye scatter symbols will trigger the bonus round, but instead of spins you will get an interactive mini game. The aim is to move through different vaults, each one will be filled with items surrounding a goddess. Select items from the vault to reveal prizes, eventually you will land on the symbol that will make you move to the next vault. The aim is to retrieve as many cash sums before hitting the move forward symbol. There are three vaults in total, Water is the first, then Earth and Fire. After finishing up in the fire vault you will be returned to the main game.

With its mystical theme Forgotten Land of Lemuria is the ideal sanctuary for many of you out there. Wins can vary significantly from low to high and do trigger often enough to keep your interest. It’s a little harder to trigger the vault bonus, but when it does begin it is certainly an interesting twist compared to the usual spins rounds and can prove very rewarding on all counts.