The thought of taking money from the bank straight into your pocket, is a dream everyone has from time to time. Well, Boku Slots has found the perfect game to fulfil that dream in Bust the Bank. Microgaming have pulled their finest tricks out of the bag for this one and hopefully you’ll have a win along the way.

Play Bust the Bank on any of these top casino sites;

Bust the Bank is a 5-reel, 243 ways to win slot game, offering an RTP of 96.5% for its players. The game itself doesn’t have the usual card suit symbols, instead the design is laid out like a cartoon bank robbery. Symbols such as explosives, police, banks and even two thieves making a run for it, all adds to the feel of the game. Wins are paid out differently here with the game having 243 ways to win. So, as long as the matching symbols that form a win are on an adjacent reel it will pay out, unlike other games where they need to be in a consecutive row.

Bet Amounts – Betting on Bust the Bank begins at just 30p per spin and can be increased to £300 per spin if required. To amend your bet amount, click on the word bet on the bar at the bottom of the screen. Here you can change the coin size from 1p to £1 and the coin multiplier from 1 to 10. Make sure you have amended your bet amount if needed as once you spin, the money is deducted from your balance.

Wild Symbol – Your wild symbol is the Bust the Bank logo. It will substitute for all other symbols except the scatter and two bonus symbols.

Scatter Symbol – The scatter symbol is depicted by a bomb about to explode. Land three or more of these to trigger the bonus spins. You will also receive an additional pay out for landing three or more on a winning pay line combination, as well as the normal pay line win too. 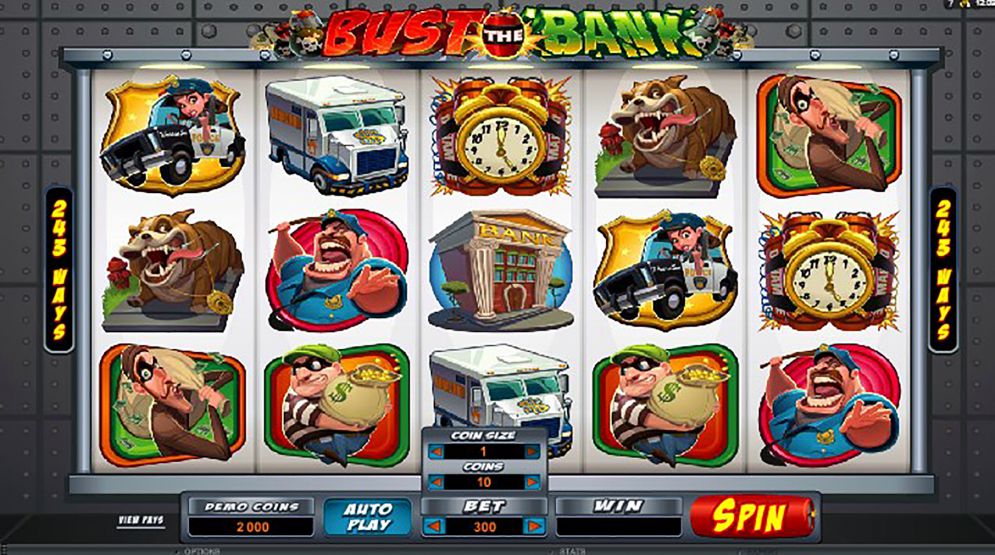 Bonus Symbols – There are a few bonus symbols in play here at Bust the Bank, which include the safe bonus and the piggy bank bonus. These two symbols will take you into the bonus games, but if you see the two thieves named Larry and Bob randomly running across the reels, they too will award bonus prizes as well.

Bonus Spins Feature – By landing three or more of the bomb scatter symbols, you will be allocated a set of bonus spins to play through. You will receive 8 bonus spins and every time you land a scatter on reels during the bonus spins, it awards one additional spin. During bonus spins reels 1 and 5 are completely wild too, which will help with winning combinations across the reels.

Safe Bonus Feature – Land a safe in any position on reels 1 or 5 and you will be awarded a coin win amount. Once the safe has landed on a position, the door will open and coins will pour down and duplicate the win amount on every symbol below the safe.

Piggy Bank Bonus Feature – Land a piggy bank symbol anywhere on reel 3 and you will get the chance to smash the pig. Once the pig is smashed a coin value will be inside and that is your prize.

The animations on the win lines are quite cool looking. Shame the music in the background is a tad overbearing after a while, but that’s where the mute button comes in handy. Overall, Bust the Bank is fun, lively and exciting, with brilliant bonuses to keep the interest going. The bonus spins lacked a bit in substance, but again this is where the extra bonuses came into play.