Have you ever wondered what it was like to be a samurai? No, us neither, but for a short moment in time with the help of NextGen Gaming you can walk in a samurai’s shoes. Enter the ancient Japanese realm and take a walk in the mountains with Samurai Split! 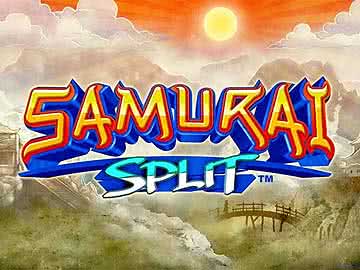 Play Samurai Split on any of these top casino sites;

Samurai Split is a 5-reel, 25 fixed pay line slot offering an RTP of 96.63%, to those who are brave enough to face the samurai. In the background you will see lots of temples, mountain ranges and the red rays of the sun beating down. As the reels spin there is a tune playing along which is oriental in theme and quite fitting for the game. Unfortunately, the sound effects when wins land are a bit more off putting and let it down for us.

Symbols include a samurai, temple, warrior, sword and a potion bottle as your higher values. Lower values are depicted by the usual card denominations of A, K, Q, J and 10. All of which are brightly coloured and in oriental font to match the overall look of the game.

Bet Amounts – Betting begins at 40p per spin and can be increased to £100 per spin in Samurai Split. In order to achieve your desired bet, you need to use the arrows on either side of the coin stack. You can find this on the lower right corner of the screen. Adjust those arrows until you reach the bet amount you are happy with and away you go.

Wild Symbol – A red emblem with the word wild on the front is your wild symbol in Samurai Split. It will substitute for all other symbols except the scatter.

Scatter Symbol – Your scatter symbol is a banner and landing three or more of these anywhere on the reels will trigger the feature. Scatter wins are also in play here with an extra win being awarded on top of any line wins as shown below: 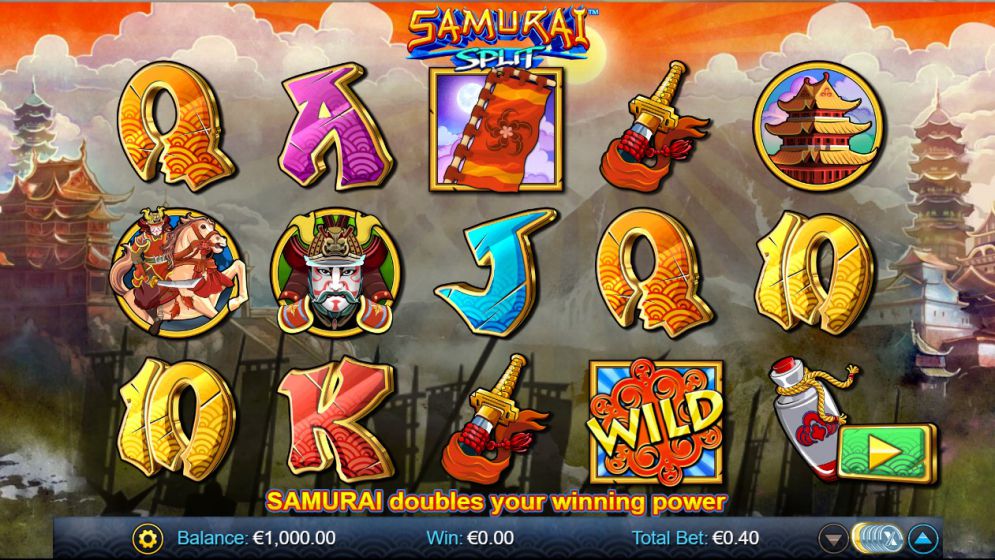 Samurai Split Feature – This feature is aptly named after the games title and brings with it an interesting twist to the game. Appearing at random on any spin, you will see the samurai warrior leap onto the reels wielding his sword. He will then slice random symbols (including the wild and scatter) in half, splitting them in to 2 symbols occupying one-reel position. Upto one or more symbols may be split by the samurai, meaning bigger potential wins and offering up to x32 the usual pay out for the win.

Warrior Chance Feature – Another randomly triggering feature, this one however removes symbols instead of splitting them. During any spin the A, K, Q, J and 10 symbols will be removed, leaving only the higher value symbols in play!

Bonus Spins Feature – Having landed three or more of the banner scatter symbol anywhere in view, you will trigger the feature. The joy of this is that with the addition of the samurai split feature, you could potentially end up with a huge amount of spins to play through. Spins are allocated as shown below:

The above spins are based on landing 3, 4 or 5 single scatters anywhere on the reels. If the samurai should split any of the single scatters into 2, you will be awarded extra spins on top. With upto 480 spins allocated if you land 5 split scattered symbols on the reels.

Samurai Split is going to be a game you revisit that is for sure. There are three super features to keep things fresh and exciting. Wins happen fast and often in the base game and once you trigger that bonus spins round they just get better, as you are only playing with the higher value symbols! NextGen Gaming have set a nice pace with this game and we can see why it quickly became popular with players across the board.