Lightning Box has developed a magical world full of mystery, pixies and of course woodland animals. So, we’re heading down to the woods in an attempt to help you find the Pixie Gold that lies within. All you need to do is spin those reels and maybe just maybe, the pixies will treat you to some riches? 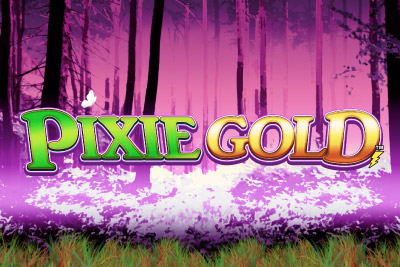 Play Pixie Gold on any of these top casino sites;

Pixie Gold is a 5-reel, 1296 ways to win slot offering players an RTP of just 95%. The interesting twist here is that reel 3 is comprised of 16 positions, which they have named the ReelFecta! So, with the addition of the ReelFecta reels upping the pay line structure and the engaging graphics we can forgive the low RTP.

When you first start the game, you will see the reels look as if they are caught between the trees in a lush forest setting. Beneath the reels is a mouse pulling a carriage, which is pretty cute and will be relevant for the bonus feature. There is also an overly cheery music track playing as the reels spin, which got a bit tinny after a while, so we switched that off. Symbols include lots of things you would find in a storybook forest, from a grumpy king, toadstool house, snail, ladybug, satchel and acorns which are your higher value symbols. To the lower value symbols which are the K, Q, J, 10 and 9.

Bet Amounts – Betting begins at 50p per spin and can be increased to £500 per spin! To adjust the bet in Pixie Gold you need to click on the cog symbol at the top right of the screen. You will then be taken to a new screen where you will see a slider, which you can adjust until you are happy with the bet.

Wild Symbol – Your wild symbol on Pixie Gold is a pixie and she will substitute for all other symbols except for the scatter. She will only appear on reel 3 during the main game, which means any of the 16 positions on reel 3. 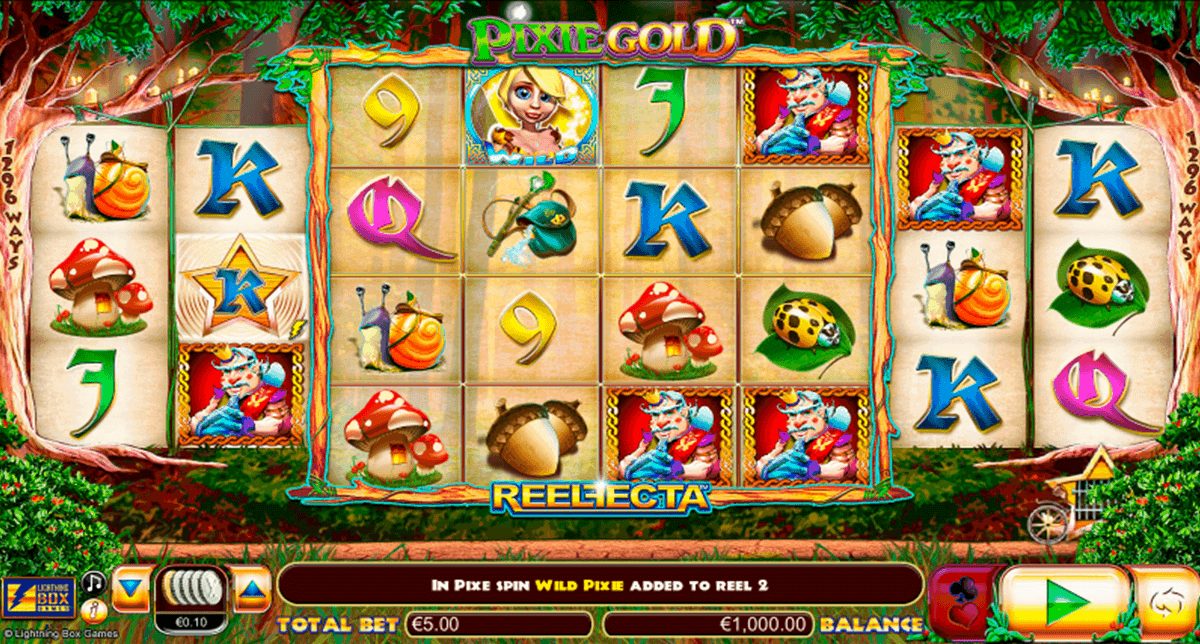 Scatter Symbol – A gold star with a K inside it is your scatter symbol. Landing this anywhere on the reels (as long as it is above the gold carriage) will trigger the feature for you.

ReelFecta Feature – So, what is a ReelFecta reel and how will it help you? You will see that your reels look as if they are offering an 8-reel layout, when in fact it is still actually only 5 reels. This is because reel 3 is special and is offering players a huge 4×4 layout. What does this mean for you the player? Because of the 4×4 layout it offers 16 symbols in total, this in itself creates huge win potentials for players if you land multiple win combinations that can be completed with separate symbols from reel 3! Simply put when reel 3 lands, any one of the 16 symbols present can now be used to complete winning combinations. Only one symbol at a time can be used, meaning if you have a symbol that can complete three winning lines it will complete the highest paying win on offer. But if there is another possible win that can be created using another symbol, that too will be awarded.

Pixie Spin Feature – To trigger the Pixie Spin feature on Pixie Gold, you need to line up the scatter symbol with the gold carriage directly below it. You will see the carriage moves, as the mouse diligently drags it across the screen each time the reels spin. Once you have triggered the feature you will now be awarded just one single bonus spin. But, and here is the kicker, you will have a guaranteed pixie wild symbol on reels 2 and 3, instead of just reel 3 meaning much bigger win potentials. Plus, this feature tends to trigger fairly often, so you don’t have to wait long for those wins to roll in.

Pixie Gold may not have too much to offer by the way of extra features, but this we can forgive. In part due to the fact that the pixie spin triggers that often, that it feels like you are playing plenty of extras without actually realising it! Add to that the main game wins happening fast and furious too, even though it’s usually at the lower end of the pay scale. The ReelFecta actually enhances the games intrigue and excitement levels bringing something new to the table for game players all round. We think Pixie Gold is definitely one that people are going to enjoy time and again.