If you love all things from the wizarding world, then this next slot is going to be right up your alley! NetEnt have dug deep into the library to find you this delightful offering named the Golden Grimoire. Granted it needed to be dusted off and translated before you mere mortals could lay eyes on it. But they did just that, and now you can play by mixing spells to hopefully bring you wealth and excitement. 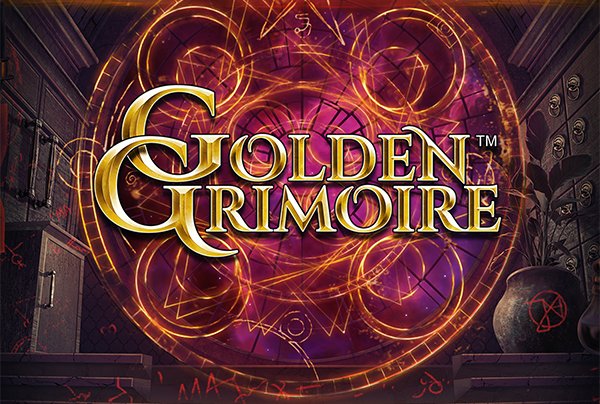 Play Golden Grimoire on any of these top casino sites;

Golden Grimoire is a 5-reel, 40 fixed pay line slot offering a magical RTP of 96.44%, for all you budding wizards and witches out there! Before you even begin to play, the atmosphere is set with a short video introduction that exudes mysticism and is almost enchanting in itself. Once the game is in play you will see it is set inside a wizard’s lair that is dark and gloomy, with the reels spinning transparently against the background. There is a lot going on with glowing spells in the walls, wind flapping the sheets of paper and candles burning brightly at the bottom of the screen.

Bet Amounts – Betting on Golden Grimoire begins at 20p per spin and can be increased up to £100 per spin. To adjust the bet amount, you can change the coin value and the coin level. These are found on either side of the spin button, to the left and right. Use the plus or minus symbols on each of these to adjust your bet, until you reach your desired stake. You can change your bet after every spin if you so wish too, but always check your balance to ensure you are happy before hitting that spin.

Wild Symbol – Your wild symbol is a glowing skull with the word wild on the front of it and some mystical drawings behind it. It will substitute for all other symbols except the scatter and the mystery symbols. There is a slight difference with how the wild lands in Golden Grimoire though, it only appears once the mystery symbol has landed and transformed into the wild! This may be off putting to some of you but believe us when we say it has no negative effect on the gameplay by being this way!

Mystery Symbol – As the game is called Golden Grimoire it of course makes sense that the mystery symbol is a book. Indeed, it could even be the Grimoire itself, as it glows with golden writing and a question mark above it. This will only appear on reels 3, 4 and 5, but you only need to land one symbol minimum to trigger the mystery feature. 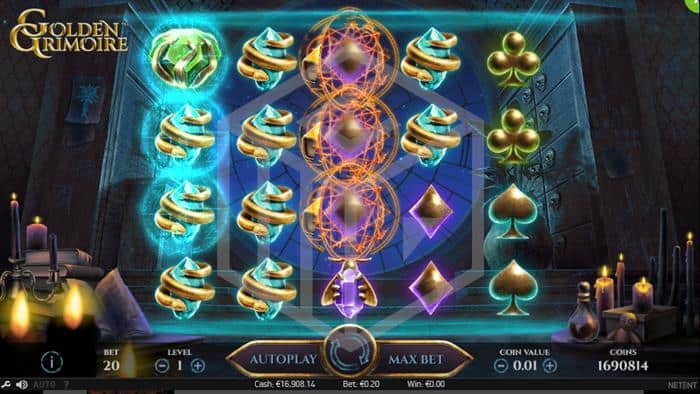 Mystery Feature – Land just one of the mystery symbol on reels 3, 4 or 5 to trigger this feature. It is a simple one but super effective. Every time you land a mystery symbol it will transform into any of the four low paying symbols or the wild. But it doesn’t stop there, if the mystery symbol transforms and it matches the symbol that is on reel one in the same position, then all symbols in between them will also be transformed into matching symbols. You may be lucky and land more than one mystery symbol at a time and if so then you are potentially looking at much bigger wins.

Bonus Spins Feature – If you get one scatter symbol on reels 1, 3 and 5 respectively, then you will bag yourself the bonus spins feature. Here you will be allocated with 8 bonus spins and an extra bonus too. In this round your mystery symbol becomes a sticky symbol, and it will appear anywhere on reels 2, 3, 4 and 5 in the bonus spins. Performing in the same way as your standard mystery symbol with one extra twist. It will be held in place on the reel it lands, and it will transform into a different symbol on each new spin. This means if you land a mystery symbol on spin 1, then it is in place for the next 7 spins offering new chances of winning on each spin.

Golden Grimoire is definitely a game we will come back to in the future. It’s fun, fast paced and has the added extra of that mystery symbol which keeps the excitement level up. NetEnt have upped the ante again with the design and graphics, making the game as intriguing to watch as it is to play. Wins come thick and fast in the main game offering lower end pay outs, but the bigger wins do come eventually. Triggering the bonus spins is a little harder and can take time, but once they are activated and you get those sticky mystery symbols landing, all will be forgotten.