If you have a sweet tooth, then this next game is sure to get your taste buds tingling! Sugar Train was developed by Eyecon and is designed around the sweet theme, including gumballs, jelly babies, chocolates and more. If that wasn’t tempting enough, then there are three tasty treats in store for you feature wise.

Play Sugar Train on any of these top casino sites;

Sugar Train is a 5-reel, 25 pay line slot that offers you sweet bunch an RTP of 95.07%. The background of the slot is a candy land dream scene. There is a train full of goodies below the reels and all the symbols are some form of tasty treat. Even the background music is sickly sweet too, tinkling along as the reels play and in keeping with the theme.

Each of the symbols are a sweet treat and in order of highest paying to lowest paying they are as follows. Highest is chocolate cake bite, jelly frog, jelly heart, jelly baby, chocolate bars, doughnuts, lollipops, gumball, candies and the lowest paying is a cupcake. It is a lot of yummy to get your gums round that is for sure, we don’t advise playing this game if you are feeling hungry!

Bet Amounts – Betting on Sugar Train begins at 1p per line in play and can be increased to 60p per line in play. This means spins can vary from just 1p per spin up to £15 per spin, depending on the cost and the lines active. To change your bet, click on the purple box at the bottom right of the screen. You will be taken to 2 sliders, one for the pay lines and one for the cost per line in play. Move these sliders until you are happy with your bet and the number of lines you are playing.

Wild Symbol – A gummy bear sweet is your wild symbol on Sugar Train, and it will substitute for all other symbols in the game except the rainbow scatter. Any prizes won with the gummy bear wild after forming a winning combination, will be doubled.

Scatter Symbol – Your scatter symbol is a rainbow and landing three or more anywhere on the reels, will trigger the rainbow feature.

Bonus Symbol – As well as being your wild symbol the Gummy Bear is also your bonus symbol too. Land three or more of the gummy bear symbols anywhere on the reels, to trigger the bonus spins feature.

Once the feature triggers, the train will pull away and then move back in place under the reels. Then claw grabbers will drop down and attempt to grab gumballs from the carriages below. Some of the gumballs will drop back down leaving the others inside the claws. Each gumball left inside the grabber will then reveal a multiplier of between x2 to x100 the line bet amount. Meaning if all 5 claw grabbers have a gumball inside them when the feature ends, you could win up with x500 your stake amount! 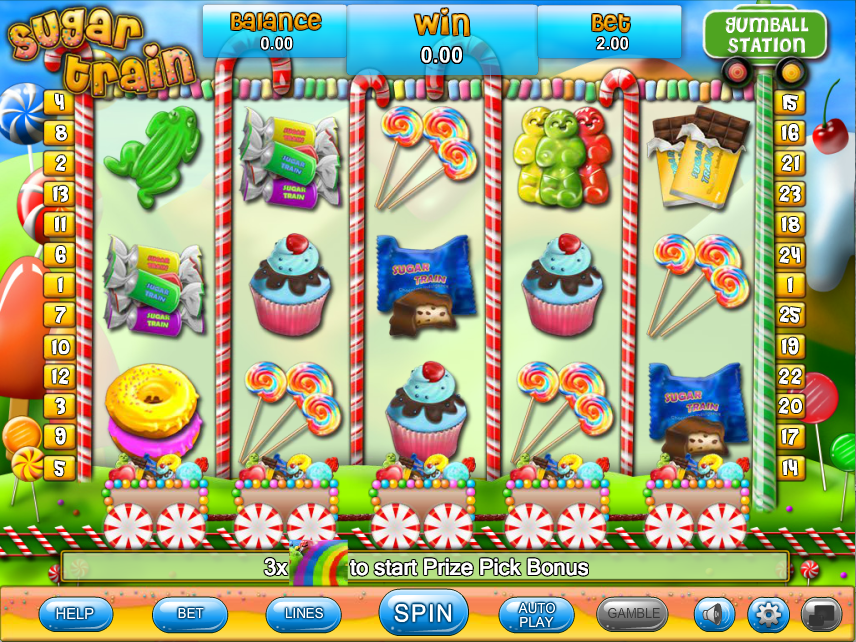 Each time you pick a rainbow on the pick screen you can be awarded a multiplier between x2 to x100. The round ends once you have completed all your picks and the multipliers revealed will then be added up and attributed to your line bet.

Bonus Spins Feature – Landing three or more gummy bears anywhere on the reels will trigger the bonus spins feature. Spins will be awarded as shown below:

Whilst there is no extra multiplier within the bonus spins round, you can retrigger it up to a maximum of 15 times from within the round.

What we love about Sugar Train is the simplicity of it all, because the game plays fast and is fun to watch. Waiting to see of those traffic lights trigger the gumball claw grabber, makes for interesting game play too. Plenty of wins occur in both the main game and all of the features, and the bonus spins trigger easily. We found it was easier to trigger the gumball and bonus spins feature than it was for the rainbow feature. So, don’t be too disheartened if you play and the rainbow doesn’t land. It takes time and sometimes when playing quick games, you may not see that one come to fruition. The biggest selling point of Sugar Train, is that all the features can be triggered by landing the required symbols anywhere on the reels. This means that you have as much chance of triggering the features whether you play with 1 or all 25 lines!