Now Vikings can be big and scary, but not so much in this next slot from Lightening Box Games. Here you will find the Vikings are a bit more laid back. They are more intent on helping you win big than to relieve you and your village of any wealth. Although, beware the harbour because that is when you really see what the Vikings are about and in Viking Fire this means throwing boulders. Read on to find out more about how you and the Viking can play to win. 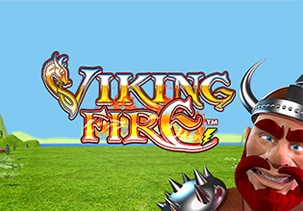 Play Viking Fire on any of these top casino sites;

Viking Fire is a 5-reel, 40 fixed pay line slot, that offers players a lower than average RTP of 95.47%. Set in lush green surroundings with no sign of pillaging going on, the reels are inside a wooden frame structure. There is a Viking on guard to the left of the reels and he is just chilling out. Even the soundtrack playing along as the reels spin is light hearted and fun. Giving us reason to believe the Vikings in this game are peace loving ones, it could happen right?

Bet Amounts – Betting on Viking Fire begins at 50p per spin and can be increased up to a whopping £1,250 per spin! Amend your bet by using the arrows on either side of the stack of coins, to the bottom left of the reels.

Wild Symbol – A golden hammer is your wild symbol on Viking Fire and it will substitute for all other symbols except the scatter. Any wins made with the wild are awarded a x2 multiplier, which is a bonus. The wild is also the highest paying symbol in the game, offering a multiplier of x1500 your bet amount for landing 5 wilds in a winning combination!

Scatter Symbol – Your scatter symbol is the word ‘bonus’ in a ball of fire! Land three or more of the scatter symbols anywhere on the reels to trigger the bonus round. Scatter wins are also in play here, meaning you will also bag an extra win on top of your line win, when the following scatters land: 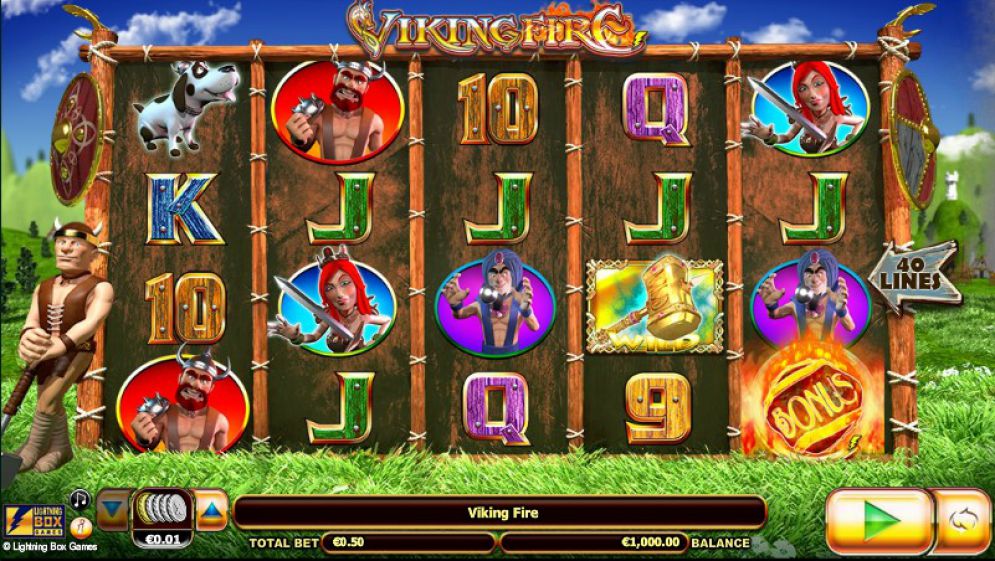 Other Symbols – Symbols in Viking Fire aren’t quite what you would expect them to be. Higher values include a Viking, a dog, a princess and a magician. Lower values include the usual card symbols K, Q, J, 10 and 9, which look as if they have been carved from wood.

Bonus Spins Feature – Land three or more of the fireball scatter symbol anywhere on the reels to trigger this feature. You are awarded 5 spins to begin with, but then you will be taken to a new screen where you will see boats in the sea. Now you will need to choose which boats to fire boulders at, in order to win extra spins or extra features for the spins round. Each boat will reveal a symbol beneath it and the prizes for those symbols vary as shown here:

If you fire a boulder and reveal an ‘X’ you lose one of your two lives. Reveal x2 ‘X’ symbols to be taken straight into your bonus spins round with whatever extras you have revealed prior. The Viking, princess and magician wild symbols will now turn gold, and will substitute for all other symbols except the hammer wild and the fireball scatter.

Gamble Feature – This option is available after every winning spin. You can choose to gamble your win with the potential of doubling or quadrupling it. To double your win, you need to choose the correct colour of the card turned over in front of you, so either pick red or black. To quadruple your win, you need to select the correct card suit, either heart, diamond, club or spade. After each winning selection you can then choose to pick again. You can gamble up to a maximum of x5 wins during the gamble feature. But beware, choose incorrectly and you risk losing it all.

Viking Fire is an extremely fun game to play, especially the pick it game before you enter the bonus spins. Lightening Box Games have developed a fun and frivolous theme for the Viking genre and it actually works really well. The animations on the different characters when they form a win is a nice twist and the wins come fairly often too, which is always good. As for the bonus round there are some good sized wins to be had there and it is easier to trigger than in some games. This is because the bonus symbols can land anywhere in view and not on specific reels, giving everyone a fair chance to land them. Overall an engaging and entertaining slot with fast paced gameplay and good win ratios. Viking Fire is definitely one you will want to add to your favourites list.