When you hear the word arctic, it conjures up images of a vast white landscape. It certainly doesn’t make you think Vikings, not unless you are playing Microgaming’s Arctic Fortune that is. It has everything you could want, chilling characters, a heart pounding track and an interactive bonus feature. 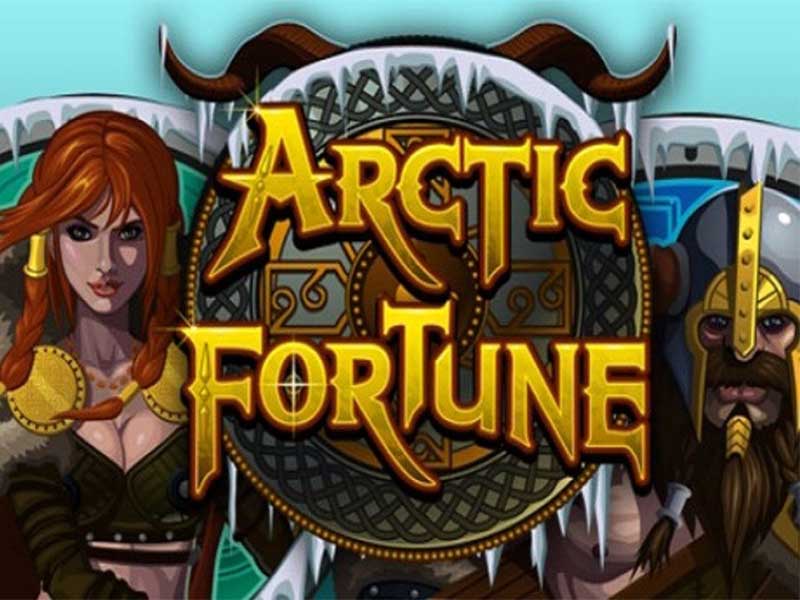 Play Arctic Fortune on any of these top casino sites;

Arctic Fortune is a 5-reel, 1024 ways to win slot offering players an impressive RTP of 96.58%. To land a win with this kind of pay structure, the matching symbols need only be on adjacent reels working from left to right. Dispensing with the standard pay lines in favour of this can result in wins landing more often, but usually at the lower end of the pay table.

The game itself looks set inside a very chilly landscape, covered with snow and mountains. With the actual reels encased in ornate gold framework and packed with Viking themed symbols, there is a lot going on visually. Highest paying symbols are the three Viking characters, an axe wielding man, a female warrior and a Viking chief. The lower paying symbols are a treasure chest, longboat, wolf and a horn filled with nectar. As the reels spin there is a heavy drum beating sounding track, which certainly builds on the atmosphere that’s for sure.

Bet Amounts – Betting on Arctic Fortune begins at 50p per spin and can be increased up to a massive £500 per spin! Amend your bet by changing the coin value and the coin amount, both of which are found to the left of the spin button.

Wild Symbol – The Arctic Fortune logo is the wild symbol and it will only appear on reels 2 and 4. It will substitute for all other symbols in the game except the scatter.

Scatter Symbol – A treasure map of sorts is your scatter symbol on Arctic Fortune and X really does mark the spot in this game. Land 3 or more of the scatter symbols anywhere on the reels to trigger the very interesting bonus feature which is in two parts. Plus, if you land just 2 scatter symbols, you will be awarded an extra win of x1 your bet amount on top of any line win you have landed. 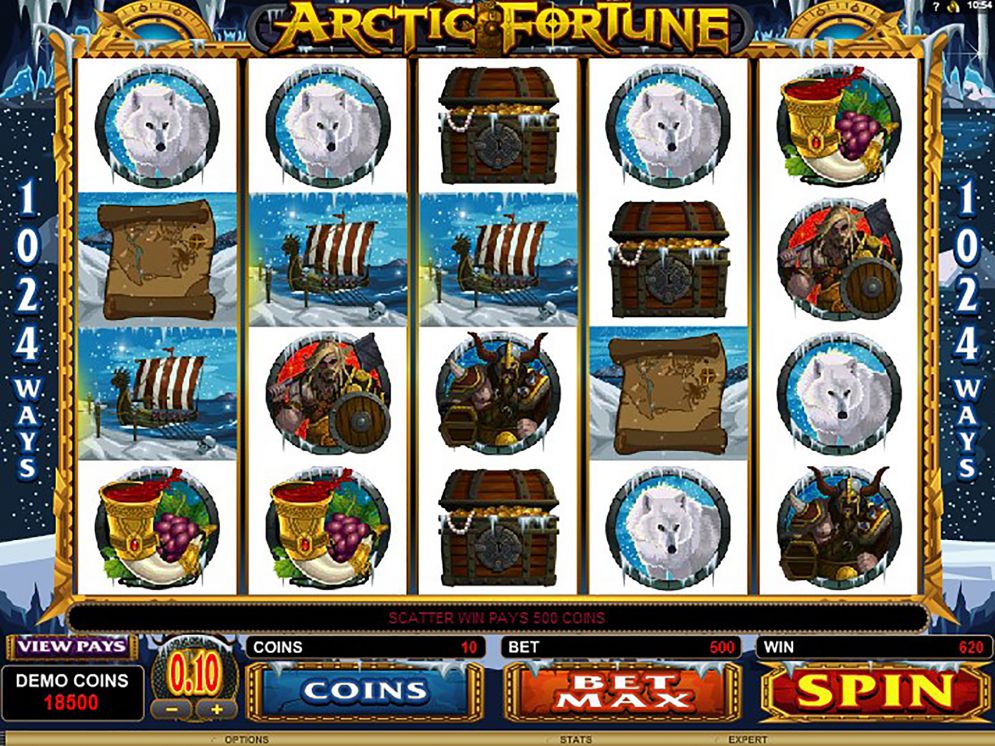 Spider Attack Feature – This is part one of your bonus feature, so when you land three or more scatter symbols you will be taken to a new screen. Here you will be faced with a door and guarding it are spiders of various shapes and sizes. You need to kill these spiders in order to win yourself bonus spins, multipliers and extra coin wins. You will first need to select the smaller spiders, killing them as you go. As each one is killed and the prize below it is awarded, you will take a step closer to opening the doors and revealing the giant spider within. Aim your shots at its head and body, and then to the cranks on either side of the doorway to close the door onto the spider. Once you do this everything you won from killing the spiders will be accumulated and you will move to part two, which is the bonus spins round.

Bonus Spins Feature – Once you have completed the spider attack feature, you will now be taken back to the reels to play through your bonus spins. The number of spins you have will be determined by the spiders you kill in the first round, with a maximum of 40 up for grabs. This will also determine your multiplier for any wins you land during the bonus spins round, with up to a x6 multiplier on offer. If this wasn’t enough, if you land 3, 4 or 5 scatter symbols during the bonus spins round, you will be allocated an extra 3, 4 or 5 bonus spins on top of your current total!

Well, we are certainly glad that we decided to drop by Arctic Fortune. What we didn’t expect was how much excitement would be built by the two-part feature. Though if you are not a fan of spiders the first part may be more torture than fun. But the ends far outweighs the means when it comes to this feature.

Once you have killed all the spiders and bagged your spins, multipliers and instant coin wins, you are in for a very profitable bonus spins round. All that aside even the main game wins are fast and furious, although somewhat on the lower end of the scale with the occasional bigger win. But for us with Arctic Fortune it is all about the feature, and what a feature it is. However, you may have a wait before it lands, so be sure to bet within reason, as you don’t want your balance depleting before it triggers.

January 14, 2020 Boku Slots Comments Off on Hearts of Venice