What do you get when you cross rock music and a leprechaun called Ryan? Yggdrasil Gaming’s, Rainbow Ryan obviously! Turning their hand to yet another popular theme in the slot world and making it their own, Yggdrasil Gaming have given the wee folk a modern twist. Combining their amazing design work with two fantastic features, we are excited to see what Rainbow Ryan brings to the table. 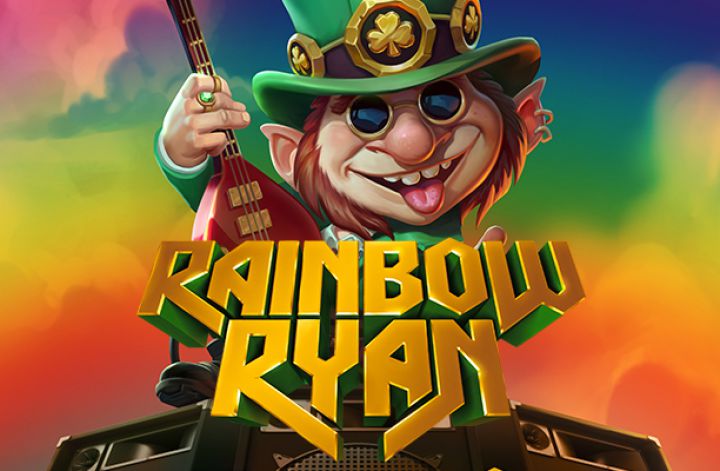 Play Rainbow Ryan on any of these top casino sites;

Rainbow Ryan is set out on a 6-reel, 4096 ways to win frame, popular with most Yggdrasil Gaming slots. It offers an RTP of 96.30% and a pay structure that works slightly different to the normal pay lines. Winning combinations are formed by getting matching symbols in adjacent reels and as long as it is formed left to right it will create a win.

Your reels are set out to look like a huge stage and there is a distinctly rock feel to the music being played throughout the game. Ryan the leprechaun is off to the left plucking away on his electric banjo and he brings to life one of the main features too. Higher value symbols are a hat filled with gold, a set of boots, a microphone and mug of ale. Lower value symbols are represented by the spade, heart, diamond and club card suits.

Bet Amounts – Betting on Rainbow Ryan begins at 10p per spin and can be raised up to the limit of £100 per spin. In order to change your bet, you need to use the plus or minus buttons on either side of the coin value section.

Wild Symbol – The wild symbol is a giant gold disc with the word wild inside. It will substitute for all other symbols in Rainbow Ryan except for the scatter.

Scatter Symbol – An amplifier is your scatter symbol in Rainbow Ryan. Landing 3 or more of the amplifier scatter anywhere on the reels will trigger the bonus. 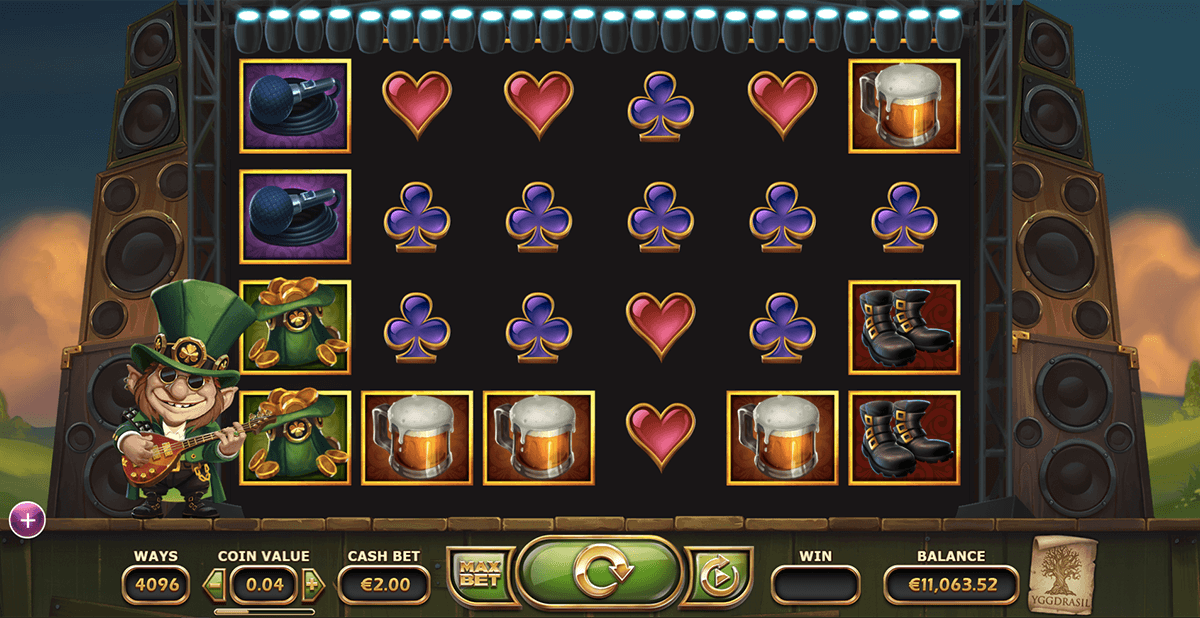 Rainbow Synced Reels Feature – This is where our plucky little leprechaun Ryan comes into his own. He will at random start playing his guitar and shooting rainbows from it at the reels. Those reels are now synced and when they finish spinning will land with identical symbols on them. Reels can be synced from just 1 to all 6, but if 2 or more are being synced at least two will always be adjacent reels. All symbols in the game including the wilds are able to be synced in this feature, meaning there are much bigger win combinations able to be formed, especially if more than one reel is activated.

Bonus Spins Feature – Triggered by landing three or more of the amplifier scatter symbol anywhere on the reels. You will be allocated with a number of spins now to play through and they are dependant upon the number of scatters present when triggered.

During the bonus spins round, the rainbow reels feature is also activated and will occur on every spin. There is a little twist with it though, the rainbow reels will increase after every few spins. Meaning you will begin with one reel active, then it will increase to 2 and so on until all reels are rainbow synced for each remaining spin. Meaning towards the end of your spins you will have multiple synced reels bringing you identical symbols and potentially bigger wins.

Rainbow Ryan is a fast paced, rock fest and we loved it! Wins occurring often throughout the entire game, but when those rainbow reels trigger, that’s where the money is. Our plucky little leprechaun is a fab addition as he strums away at his guitar to the left of the reels and animating him was a great idea. We would have liked to have seen an extra feature with a bit more pizzazz involved, although the two that Rainbow Ryan does have work very well together. Especially once you hit those bonus spins and the rainbow reels increase every few spins, and in turn so do your win chances. Overall an easy enough game to play with lots of win potential and fun to be had. Another winner from the Yggdrasil Gaming library and anew favourite for us too.