If you have been watching this show unfold on the TV, then you are in for a treat. Vikings finally has its own dedicated slot game thanks to NetEnt and we are sure it will be as popular as the show. Join in the rampages of Ragnar, Lagertha and the rest of the Vikings band and keep the momentum running long after the show has finished. 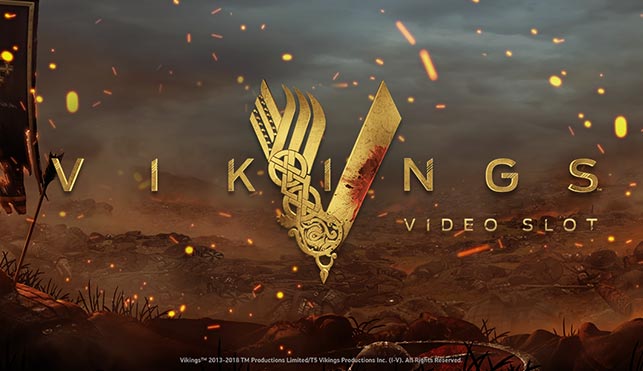 Play Vikings on any of these top casino sites;

Vikings is a 5-reel, 243 pay line slot offering an RTP of 96.05% for any one joining the marauding band. What is most impressive about Vikings is the attention to detail given to the whole feel of the game. From the video intro, to the shaman muttering ominous words at the beginning and even the fog filled background complete with black crow and gloomy music. If that wasn’t enough the symbols include various characters from the show, as well as card suits given a Vikings edge to them. Higher values include Ragnar, Lagertha, Floki and Bjorn, with Lower values being the A, K, Q, J and 10 edged in metal and dripping with blood.

Bet Amounts – Betting begins at 20p per spin and can be increased in increments up to the maximum of £100 per spin. This can be achieved by changing the coin level or coin value which are found to the left and right of the spin button. Adjust the plus and minus signs on either side of these to get to your preferred stake amount before hitting spin.

Wild Symbol – Whilst Vikings doesn’t have a wild symbol to speak of, there are still lots of other treats in store for players of the game.

Scatter Symbol – What are Vikings best known for? Going on raids of course and in this game the scatter symbol is a target with the words raid spins emblazoned on them. Land three of these symbols on reels 3, 4 and 5 to trigger the bonus spins round. 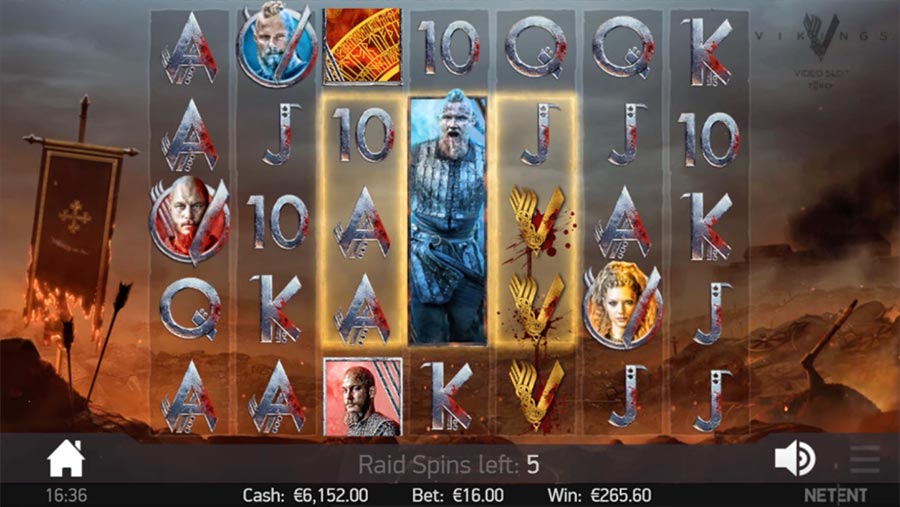 Bet Ways Feature – Unlike most pay line structures, Vikings plays with Bet Ways. This means the symbols don’t have to be in connecting symbol placements, as long as the symbols matching are in adjacent reels working from left to right. This makes for larger pay line options in play, giving you the full 243 that are on offer in the main game and the 78,125 on offer in the bonus game!

Hotspot Feature – As your reels spin you may notice that the centre reel is glowing. This is the hotspot reel and doubles up as a scatter wins trigger. By that we mean, if you land a fully stacked character symbol on the hot spot reel, it will turn all other character symbols into the same one in the hotspot and pay out as a scatter win. This feature offers a win of x6 your stake up to a whopping x200,000 your stake.

Shield Wall Feature – At any point in the main game or bonus spins the shield wall can appear. It will randomly cover spaces on the reels and when it moves away there will be matching symbols in its wake, leading to more wins.

Bonus Spins Feature – Landing three of the target scatter symbols opens up an almost entirely new game for players of Vikings. It will first allocate 7 bonus spins, but you will also get extra reels. So now your spins are taking place on 7 reels with 5 rows and a massive 78,125 pay line structure in place. If that’s not enough, there are now also three hotspots on reels 3, 4 and 5! Meaning when a Viking appears fully stacked in any of these reels, it will transform every other Viking on the screen to match!

Vikings is an epic game of many levels, just like the show. However, you don’t need to be a fan to enjoy this slot. NetEnt have pulled out all the stops to ensure the game is in keeping with the theme, but it works as a standalone too. The addition of the hot spot is a stroke of genius, giving a different twist on how scatter wins are paid out and we loved this. However, the shield wall feature didn’t actually pop up more than once all the time we played, so although it was profitable when it hit it took quite some time to get it. Raid Spins was equally hard to trigger, maybe because of the sheer pay out that can be landed once it does. The extra reels and pay lines in play during those 7 spins can mean some potentially huge pay outs. Our advice, if you are in the game for the features make sure you have a sustainable balance. But if you are happy with base game and scatter wins then you will have plenty of enjoyment from Vikings.