Have you ever seen Chinese celebrations and the huge dragon dancing through the streets? Well this next slot from Microgaming is based around the Chinese New Year and of course the Dragon Dance that always makes an appearance! We love oriental themed slots, they are usually bright and colourful and lots of fun, so let’s see how this plays out? 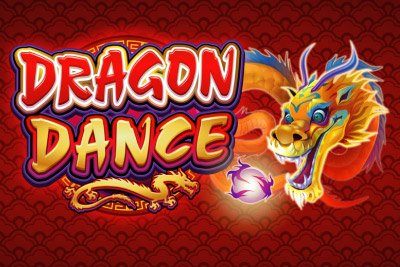 Play Dragon Dance on any of these top casino sites;

Dragon Dance is a 5-reel slot offering players 243 ways to win, instead of the standard pay line structure. Meaning in order to complete a win, you need to have matching symbols on adjacent reels starting from the left. It is also offering a celebration worthy RTP of 96.52%, as well as a reel respin feature too which we will explain below.

Symbols encompass images of people celebrating, different dragons and even the card symbols have been given an oriental twist. There is an upbeat sounding track playing along as the reels spin, giving a nice feel to the game. Higher value symbols include an orange dragon, white dragon, a dancing couple, a drummer and a person clashing symbols together. Lower values are the A, K, Q, J, 10 and 9 symbols, of which the first 4 all have a little oriental design to them, including lucky coins, a fan, a jade pendant and of course there is a dragon there too! As to why only the four royal symbols have these little extra designs and not the numbered ones we can’t say.

Bet Amounts – Betting on Dragon Dance begins at 25p per spin and can be increased up to the maximum of £125 per spin. Use the plus and minus signs on either side of the bet amount to adjust your chosen bet.

Wild Symbol – The Dragon Dance logo is your wild symbol here and it will only appear on reels 2 and 4. It will however substitute for all other symbols except the scatter when it does land on the reels! 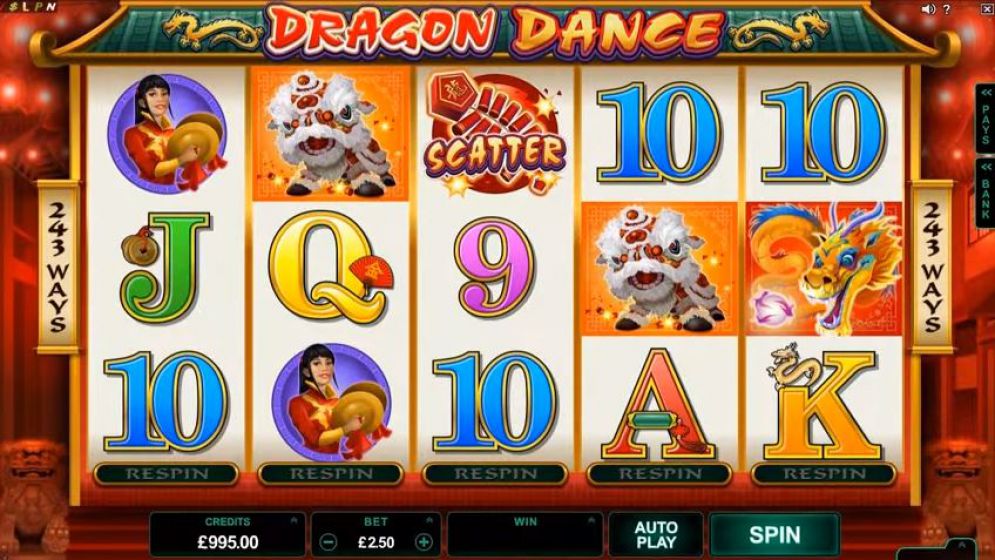 Scatter Symbol – A set of firecrackers is your scatter symbol and landing three or more of these anywhere on the reels will trigger the bonus spins feature for you. Scatter wins are also in play here and will award an extra win on top of any line wins you land.

Reel Respin Feature – Microgaming often adds this feature to spice things up for players. The way it works is simple, each reel can be spun independently of all the rest but for an extra cost. You will see at the bottom of each reel there is a green bar, so at the end of every normal spin you make you have the choice of spinning each reel again. Note that at the end of each spin the cost on each reel changes, depending on the possible outcome that spin might bring. The higher the cost to spin the reel, the better chance you have landing a symbol needed to help form a win.

Bonus Spins Feature – Once you have landed the required three or more scatter symbols needed, you will enter the bonus feature. You will be allocated with 15 bonus spins to play through and all wins will be awarded a x3 multiplier. If that’s not enough, you can retrigger the bonus spins from within the round by landing those scatters again and again. There is no limit to the number of times the bonus spins can be retriggered. Reel respins are not available within the bonus spins round.

So, Dragon Dance may not be jam packed with features, but the two it has certainly made for interesting game play. The individual reel respin feature allows you to take a chance on separate reels spinning in your favour. Be wary though as you don’t want to get caught in the trap of spinning each reel individually, as this may end up costing you more in the long run. With the bonus spins feature there is a generous allocation of initial spins, coupled with a great multiplier. Wins come thick and fast in both the main and bonus games. However, we found in the main game of Dragon Dance the wins tended to land more in favour of the lower end of the pay table. Thankfully though it doesn’t take long to trigger that bonus feature, with scatters landing often and bringing with them those extra scatter wins too!