Its time to don your sea faring boots as Boku Slots takes you on a boat trip. Hope you have your sea sickness pills at the ready as we head into 1429 Uncharted Seas, a nautical themed slot game from the team at Thunderkick Software. 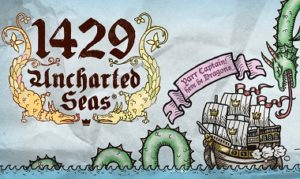 Play 1429 Uncharted Seas on any of these top casino sites;

1429 Uncharted Seas is a 5-reel 25 pay line slot game with an amazing RTP of 98.6%, so if you are going to play any ancient nautical themed slot game this year make it this one. You will be embarking on a sea faring mission to find lost treasure, which is found by playing around on the ancient map visible on the screen.

Bet Amounts – Betting begins at 10p per spin and can be increased up to £100 per spin. This means that even though there are 25 fixed pay lines, you are paying per spin not per line making it much more affordable than some. That being said the winnings are varied depending upon the stake amount.

Wild Symbol – The wild symbol is an expanding wild. It begins with your ship and grows into a sea monster that lifts your ship up to expand across the reel. This symbol acts as a substitute for all other symbols except the scatter. It will only appear on reels 2, 3 and 4 so keep an eye out for that appearing, as it will give you more winning combinations. 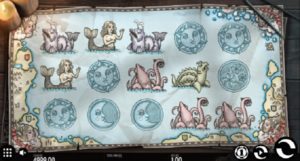 Scatter Symbols – Your scatter symbol is a compass and it will allocate you a selection of bonus spins, dependent upon the number of scatters you land on the reels.

Other Symbols – Other symbols on offer are a variety of nautical themes. These include the Mermaid which is your highest paying, sea monsters and then symbols showing the sun, moon and stars which are your lowest paying symbols.

There isn’t much going on by way of animations within 1429 Uncharted Seas, but in a way that’s why we love it. The soundtrack had to be switched off after a while as the music and sounds combined, was a little too much for our liking. That being said we had a great time with this slot and we think if you give it half a chance you will love it too. With a great expanding wild, bonus spins and an impressive RTP what’s not to love.