What isn’t there to love about autumn, the colours on the trees, the drawing in of the nights. Oh and of course the gold that can be found hidden away in the trees by those pesky animals; that last one may be slightly slot game specific. Eyecon have encapsulated all the things we love about autumn in this quaint looking slot game. 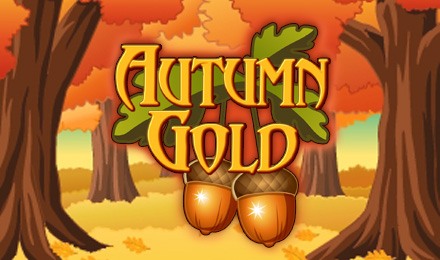 Play Autumn Gold on any of these top casino sites;

Autumn Gold is a 3-reel, 9 pay line slot offering an RTP of just 95% for players. However, despite the low pay lines and low RTP there are two meaty features available, which more than make up for it. Your game screen has a very basic setup, with an autumn woodland scene in the background and your reels offset to the left inside a brown frame. There is no music at all whilst the reels spin, which can make for a very boring game. When you land a win however things pick up a little, with the tinkling trumpeting sounds that herald a winning combination. This is short lived though as the reels go back to spinning in silence until the next win.

Bet Amounts – Betting on Autumn Gold begins at 1p per line in play and can be increased to £5 per line in play. There are just 9 pay lines that you can activate in this game, meaning your spins will cost anywhere from 1p per spin up to £45 per spin. To amend your bet, click the purple box that holds the bet amount and pay lines, just below the spin button. You can now move the sliders on the pay line and on the bet per line, until you reach your desired bet amount.

Wild Symbol – Your wild symbol in Autumn Gold is the games logo and it will substitute for all other symbols except the two bonus symbols.

Bonus Symbols – Autumn Gold offers players two features, so therefore it needs two bonus symbols to trigger them. Your first symbol is a maple leaf and it triggers the bonus spins feature. The second bonus symbol is an umbrella which triggers the pick me feature. Land three of either the maple leaf or the umbrella anywhere on the reels to trigger their respective bonus features.

Other Symbols – The other symbols in Autumn Gold are all in keeping with the theme. Ranging from highest to lowest we have an owl, squirrel, wellington boots, jar of jam, pumpkin and mushrooms.

Prize Pick Feature – After landing three of the umbrella symbols you will be taken into the feature. The reel symbols will all transform into umbrellas and you will get to choose just three of those in view. Each one you pick will reveal a random multiplier behind it, ranging from x2 to x111 your bet amount. Once you have chosen all three, the multipliers will be added to your bet amount and awarded as a prize.

Bonus Spins Feature – Three of the maple leaf symbols triggers your bonus spins round in Autumn Gold. You will now be allocated with just 8 bonus spins, but a x3 multiplier is in play on all wins landed during the round. It is possible to retrigger the bonus spins again from within the round up to a maximum of 15 times. Giving the player the potential of accruing up to x150 spins!

That was actually a surprisingly good game considering that it could have gone in the opposite direction. A 9 pay line slot with a low RTP like Autumn Gold has can initially be quite off putting, but upon playing and discovering those features we were pleasantly surprised. Also, because the two bonus symbols can land anywhere on the reels, this means that you could potentially trigger both bonus features with just 1 line in play. Wins happen regularly enough for you to not notice the wait for the bonus features to trigger. But once they do it can work out quite in the favour of the players, especially the pick me round. If you are lucky you could end up with x333 your bet amount in your pocket.

Overall an easy game, not much thought needed to follow it through and certainly doesn’t break the bank in cost either. Our advice would be to bookmark this for when you want a quick game, because this isn’t one you would want to play for any length in time, as it can get quite dull after a while!