Boku Slots love anything that has gods or goddesses involved and thankfully this game has a little bit of both. This particular slot hails from the lesser known Lightening Box Games, but don’t let that put you off. Their game Blazing Goddess is fast becoming popular with gameplayers worldwide and we are about to find out why. 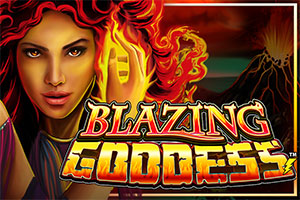 Play Blazing Goddess on any of these top casino sites;

Blazing Goddess is a 5-reel slot, offering 1,024 ways to win and a healthy RTP of 95.38%. Whilst this isn’t as high as other games with this level of win lines, don’t let it put you off for the game itself has a lot to offer. Set to a tropical background, Blazing Goddess oozes heat, fire and brimstone amongst other things. The symbols range from the goddess herself, to a volcano, flowers and what appear to be a version of Thor the god of thunder.

Bet Amounts – Betting on Blazing Goddess begins at 50p per spin and can be increased incrementally to £50 per spin. You can change this bet amount from the settings, or directly from the game by hitting the coin button at the side of the spin.

Wild Symbol – Your wild is none other than the Blazing Goddess herself and she becomes animated as she lands on the reels, giving a little edge to the game. She will substitute for all other symbols except the scatter and all wins with the Blazing Goddess wild are doubled. 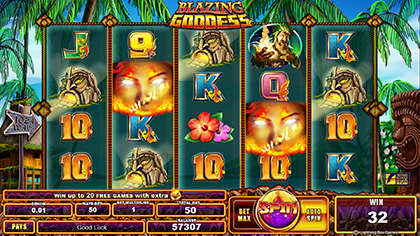 Scatter Symbol – A smoking volcano is your scatter symbol, so land three or more of these to trigger the bonus spins feature.

Wild Fireball Symbol – During your bonus spins feature a wild fireball will be added to reels 2, 3 and 4. It will substitute for all other symbols except the scatter.

Bonus Spins Feature – Having landed 3 or more scatter symbols, you will be allocated bonus spins as shown below:

You will also receive two wilds during this game which are the Blazing Goddess and the Wild Fireball, increasing the chances of big wins across the reels. There is also the chance of triggering up to 30 extra spins during the bonus round, by landing scatter symbols on the reels.

The features may be lacking but what is available makes for a great game overall. The double wilds in play during the bonus spins are a good replacement for the lack of other features. With a bright, cheery theme and a soundtrack that is easy on the ears, Lightening Box Games are definitely on the one to watch list if Blazing Goddess is anything to go by. We anticipate great things from them in the future.